After breakfast, it's off by train from Ueno to Matsumoto (via Nagano). What's to be said about Japanese train travel, really? It's reliable to the extent that a one-minute delay on the line results in an instant apology from the driver. There's rarely anything out of the ordinary to report.

Well, maybe one thing this time, and as soon as it happened I realised I'd read about it in one of my guide books. When you arrive at Matsumoto, the first thing you hear is one of the nicest station announcements on the whole network, as a recorded female voice virtually sings the name, drawing out the final vowel to a ludicrous degree. "Matsumotoooo! Matsumotooooo!" Is it wrong to admit that I spent the first hour in the town trying to work out how to incorporate that into a dance mix? Probably, but it's true.

Anyway: we're in Matsumoto. Much smaller and friendlier than Tokyo, as indicated by the slogan we saw on a couple of businesses, "we don't speak English, but try it anyway." (A statement that could be interpreted in two different ways, which is pretty sophisticated for people who claim not to speak English.) It's a charming little place just made for wandering around, which is a good thing because all the maps we've seen of it tend to contradict each other in various ways.

We first discover this just after our delayed lunch on arrival at Matsumoto, held in Vie de France: one of those Japanese versions of a French bakery, which sells things that would never be seen anywhere in France. We follow the map to our hotel that we got from Welcome Inns, only to find that they've got the street wrong by one block. Once we've been checked into the Marumo Ryokan with the traditional welcoming green tea, we pick out a couple of interesting spots on the lovely hand-drawn map that comes with the room, only to find on exploration that they aren't there. And the street layouts on both these maps vary a little from what we're seeing in Lonely Planet and Rough Guide.

The best and most accurate maps, we discover, are the ones erected in the streets themselves. Not the cast-iron relief ones - they're a whole other catalogue of falsehoods - but the modern circular ones. They help us identify the funky riverside market district, the miscellaneous fascinating bars round the back of that, and - most importantly of all, as regular travel section readers will know - the local five-screen multiplex. 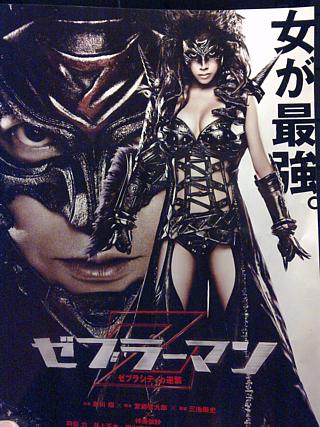 It's about ten years since I saw Dead Or Alive, my first Takashi Miike film. It started with a yakuza snorting a line of coke several yards long, and ended with two gangsters having a gunfight which culminated in the destruction of the entire planet. I came to the conclusion that Miike had a hell of a future directing cult movies, but he'd probably never get anywhere near the mainstream.

Either I'm just no good at spotting these things, or Japan has got a lot stranger in the last decade. Because Golden Week is traditionally when the Japanese film industry rolls out its big guns for holiday audiences. And this year, one of the big holiday attractions is Miike's Zebraman 2, the sequel to his 2004 hit. Trust me, this doesn't mean he's sold out.

The original Zebraman featured Miike regular Sho Aikawa in the title role, a reluctant superhero fighting baddies in imitation of his favourite TV character, and ultimately saving the world from a gelatinous green alien menace. But after a brief prologue set in the present day, the sequel takes us in another direction entirely - to the year 2025, no less. Tokyo has become Zebra City, a dystopia ruled by the iron fist and lycra-clad bottom of pop idol Zebra Queen. Zebraman is a white-haired shadow of his former self, having lost all his powers. Still, there appears to be some sort of primal connection between Zebraman and Zebra Queen. But what is it?

As has become traditional on foreign holidays, I watched Zebraman 2 in a language I didn't understand, using just the visuals to try and work out the plot. As I said to The Belated Birthday Girl afterwards: "I think I could tell you what the story was, but it sounds mental. But I'm pretty sure that whatever the real story was must be at least as daft as what I've got."

For what it's worth, it looks like I more or less got it right, which is surprising. I can think of no other country in the world where you could show this mix of broad comedy, superhero action, fetish costume show and musical, and it would be accepted as holiday family entertainment. But Miike somehow pulls all the pieces together in what feels like four successive climaxes of increasingly magnificent ridiculousness. Will there be a Zebraman 3? Anything's possible with the talent involved, but the ending of 2 will take some undoing.

Pleased with our movie success (and for the third trip in a row, I manage to get in cheap on a Men's Night deal), we wrap up the day with dinner at Kura, one of the very few restaurants all the guidebooks agree on. The locals seem amused to see us, and say all the things I imagine they usually say to foreign visitors - "your Japanese is very good" to The BBG, and "the horse sashimi is delicious" to me. We skip the local speciality regardless, and pig out on excellent tempura and sashimi instead. Here's The BBG: "While Spank was content to go for the tempura set, being me, I decided to step up a level and have the combination set of tempura and sashimi. The main difference in the tempura in the two sets seemed to be that Spank got an extra shrimp - plus maybe slightly larger portions of the vegetables. Both sets were excellent, with top quality tempura, and the raw shrimp a stand-out in the sashimi." We wrap the night up with a long and lovely soak in the Marumo's family bath, after a long wait for the git in front of us who hogs it for ages. 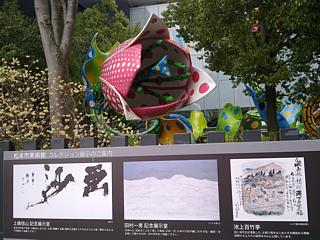 It turns out that said git is just the prelude to the following day's catalogue of minor petty embuggerances - nothing too dramatic, everything working out at the end, but irritating at the time. It starts almost immediately after waking up for me, when I walk into the loo and encounter a little girl who hasn't learned how to lock the door yet. Embarrassingly, I meet her again with her family in the breakfast room, where we discover in rapid succession that a) we're too cheap to be allowed in the breakfast room and have to go in the cafe next door, and b) the cafe has run out of pretty much everything except plain toast and salad. The BBG is not happy. (Me, I'm enough of a tourist to consider toast and salad a traditional Japanese breakfast, so I don't see what the fuss is about.)

Still, our morning visit to Matsumoto castle perks us right up again, even though the place is dangerously crammed with Japanese tourists making the most of the last day of the Golden Week holiday. Over the years I've become a little cynical about Japanese castles, as most of them have been destroyed and reconstructed in ferroconcrete, meaning that there are ancient national monuments out there that were technically built in the fifties. So it's pleasing to learn that Matsumoto is the oldest castle in Japan still in its original form. Mind you, you'd never get away with it as a design these days: the combination of polished wooden floors, a socks-only policy and several flights of incredibly steep steps make it a health and safety nightmare. (Not to mention the additional problem of teenage girls in tiny skirts climbing up those steep stairs in front of you.) Nevertheless, it's a fine experience once you're past all the steps, and the accompanying museum of Matsumoto's history is small and well-focussed.

Lunch ends up a bit of a mess: the plan is to try the local speciality of cold soba noodles, but the double whammy of the Golden Week holiday and Wednesday being Matsumoto's closing day means that we can't find anywhere open, and have to settle for mediocre pasta at 5horn inside the Parco department. After that, we try to grab a half hour's worth of free internet time at the local library in the M Wing building, but it's incredibly slow: more frustrating than that is the discovery that, in a peculiar reversal of China's internet policy, the library's webfilter will allow me to look at my blog but not post to it.

After that, the day manages to turn round a bit. The staff at the Matsumoto station tourist office provide some useful help with our travel plans for the next day. We go for a stroll round some previously unexplored areas of town, noticing on the way that Matsumoto appears to have an unusually high number of opticians. We take a quick peek at the Performing Arts Centre, even though the only action visible is the opening day of booking for their July production.

We take a slightly longer peek at the City Arts Museum, but only slightly - lack of planning means we get there just 45 minutes before closing time. It turns out to be just enough: a large chunk of their permanent collection has been removed to make room for a temporary exhibit, which shows a fundamental misunderstanding of the word 'permanent' but whittles the rest down to under an hour's viewing. The two areas set up as memorials to local artists are especially fine: the bleak monochrome snowscapes of Tamura Kazuo, and the dynamic calligraphy of Kmijo Shinzan. In less traditional style, pop artist Yayoi Kusama has gone splendidly nuts outside the gallery with his giant flower installation. A fine afternoon out, marred only by the tiny shock of having to wait five minutes to use the Western toilet only to discover that a Japanese bloke was in there.

We've got an early start the next day, so it's a quiet night. A very relaxed bath, during which it becomes apparent that the Marumo has a lot fewer people in it than it did yesterday - perhaps everyone's going back to work tomorrow? Then it's off for an eel dinner at Sakuraya, as The BBG elaborates: "The food at Sakuraya was every bit as good as that at Kura, with the added bonus of being local specialities. Sasamushi is a dish of eel wrapped in rice wrapped in bamboo leaves, and one I'd never had before. I'm a big fan of Japanese eel, and this local variation was quite lovely. Spank had a more traditional una-don, which he tells me was also excellent. And thanks to Spank noticing that one of the sasamushi sets came with cold soba noodles, I upgraded to that one and was able to get my soba fix - and they were very good, too." Then there's time for one last walk through the utterly deserted streets before packing and bed.