Simian Substitute Site for May 2010: Spicymonkey 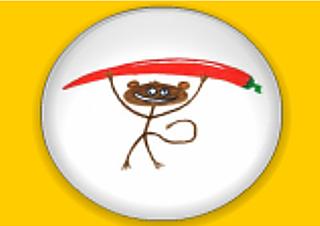 Comedy: Collings & Herrin (aka Andrew Collins and Richard Herring) have been recording free weekly podcasts for over two years now. Although their pro bono work has ultimately led to a regular paying gig at the BBC, they feel it's about time we paid them some proper money for the nonsense they talk. Hence The Best Of Earth, Wind And Fire (and water), a series of four specially recorded podcasts available on CD for a tenner from Go Faster Stripe. The result is a little bit like a big-screen movie spin-off of your favourite TV show: it has to tread a balance between keeping in favourite tropes from the original (nyum nyum nyum) while not being utterly impenetrable to anyone coming to them for the first time. The decision to theme the podcasts around the titular elements brings some useful structure to the chats (Collins, it turns out, has childhood fears based around all four of them): but Herring is always around to pull the conversation off track into a discussion of all the movies that feature actresses he's slept with (including Bridget Jones' Diary and Chicken Run).

Movies: Chris Morris' long-awaited suicide bomber comedy Four Lions hits UK cinemas on May 7th, but I caught it at a preview screening at BFI Southbank. Aside from the odd peculiar directorial tic, such as his habit of starting off scenes with an enormous zoom shot, it's a terrific piece of work. As you'd expect from Morris and his co-writers (Peep Show's Armstrong and Bain), there are lots of wonderful gags, but there's also much more going on than just jokes. A terrorist cell full of idiots is a great source of broad comedy, but I wasn't expecting that their stupidity would actually make you empathise with them more as the film progresses. The cast are wonderful throughout, with just the odd surprise appearance by a Morris regular pulling you briefly out of the world of the film.

Music: It looked for one terrifying minute that everyone involved would be stranded in Coachella due to the wrong kind of ash, but Damon Albarn managed to get Gorillaz out of America in time for their London shows at the Roundhouse. One hell of a guestlist, too: Bobby Womack, Mos Def, De La Soul, Shaun Ryder and many others popped up for a song or two, while Mick Jones and Paul Simonon did their usual fine job in the main band. Plus, lots of giant screen projection work courtesy of Jamie Hewlett and collaborators, to keep the short people in the audience happy. In other music news, the earworm currently plaguing me is a year-old J-Pop single by Vanilla Beans called Nicola, and I suspect drastic measures may be required to rid me of it.

In the meantime, your Simian Substitute Site for May 2010 is Spicymonkey. The Belated Birthday Girl and I made a day trip to Brighton the other week - Vegetarian Shoes, Due South, Volk's Electric Railway, our usual haunts. But one discovery we made that day was Chili Pepper Pete, a shop dedicated to spices and sauces of varying strengths, all the way up to one or two that require a doctor's certificate before purchase.

Spicymonkey are the manufacturers of one of Pete's more middling products (assuming you're comparing them against, say, Satan's Shit). A Gateshead company that we somehow missed out on during our Christmas visit, they produce a small but perfectly formed range of chili sauces, and the site tells you more about them as well as their other stuff. The BBG insists that as we didn't buy of their products on our trip, it somehow seems wrong to be plugging them here: whereas I'd suggest that it actually makes it more right. Try them for yourselves, anyway.

As long as you're not named after some sort of erectile dysfunction treatment, you're welcome to leave any general comments below.