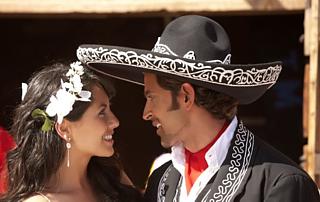 The story of Kites is bursting with crossover potential, to an almost cynical degree: a romance between an Indian and a Mexican, set in America, which uses their inability to communicate as a plot driver. You'd have thought there would be enough hooks in there for non-Indian audiences, but apparently not: so Hollywood director Brett Ratner was brought in to supervise the editing of a 'Remix' version of the film. You can see the logic behind this. Ratner is best known these days for destroying previously well-loved franchises with films like X-Men 3 and Red Dragon, but prior to that his main achievement was making Jackie Chan a global superstar. Rush Hour was the film that identified the main problem Western audiences had with Chan - great with action, less so with dialogue - and paired him up with motormouth Chris Tucker to compensate, turning them into a two-headed money-making machine. Could Ratner pull off the same trick with a film that had already been made by someone else?

Well, no, he couldn't. But it's interesting to watch Anurag Basu's Kites and Brett Ratner's Kites: The Remix back to back, and see the tweaks that have been made to the film to make it acceptable to two different cultures. Though again, I'd insist that the original was already more geared towards a foreign audience than most in the genre. The classic stereotype of a Bollywood film - several hours long, with breaks for song and dance numbers every half hour - doesn't apply here: Kites started out life with a running time of just over two hours, and its few songs are used solely as the soundtrack to montage sequences. Nevertheless, Ratner has chosen to hack it down to 95 minutes, and it's interesting to ponder on why certain changes were made.

The basic story's the same in both versions.  Jay (the wonkily-thumbed Hrithik Roshan - and the signature shot of his unusual hand is one of the first things to go from the Remix) is in a happy relationship with his dance class pupil Gina (Kangana Ranaut). He's especially happy because her dad is a casino owner and filthy rich. But things go awry when he's introduced to Gina's brother Tony (Nick Brown) and his Mexican fiancee Natasha (Barbara Mori). Because Jay knows Natasha from before - back when she was Linda, an illegal immigrant whom he married for cash to get her a green card. Initially, Jay's concern is to get Linda to agree to a divorce to allow her upcoming wedding to Tony to go ahead. Inevitably, it becomes a bit more complicated than that.

Aside from the whole epic-length-loads-of-songs thing, most people - and I'm just as guilty of it myself - tend to associate Bollywood cinema with extreme melodrama. We have good guys, we have bad guys, and there are no shades of grey in between. So it's fascinating to see that the main thing Ratner has done in his Western Remix is remove all moral ambiguity from the characters. In the Indian version, there's a whole extra scene which reveals Gina to be a borderline mentalist who was virtually stalking Jay in the early days of their relationship: and it's made clear throughout that if she wasn't from a rich family, Jay wouldn't be in the least bit interested in her. Ratner's version plays down Jay and Gina's romance to a couple of tiny scenes, reducing Gina to a background character who can be easily ignored when Linda comes along. (In fact, Gina's such a cipher in the Remix that when she makes a reappearance towards the end, I didn't actually know who she was.)

By removing a couple of scenes, the Remix makes Jay's romantic motives much less murky: and it pulls off a similar trick when it comes to violence. Part way through the Remix, Gina's dad shows Jay around the casino, and without warning gives him a gun that inevitably comes in useful later. Why would he want to do that? Well, you'd need to see the original for the scene that should precede this, where Jay is inducted into the family business as he assists in the torture and shooting of two thieves. It's a nasty scene, and needs to be nasty to move the plot forward - even in the UK version, where it had to be trimmed by 9 seconds for a 12a certificate. But the Remix realises that it makes Jay look nasty too, so the entire scene has been cut from there. Similarly, in the big daft (but undeniably fun) car chase where Jay and Linda go on the run from the cops, the Indian version sees several police cars crash and explode in flames, while the Remix cuts all the crashes to make them look non-fatal. (If there had been a budget for reshoots, you could imagine them adding in some extra shots where policemen stagger out of the wreckage rubbing their heads, Dukes Of Hazzard style.)

The funny thing is, all of this revisionism counts for nothing by the time we get to the end. Having set up Jay as a paragon of virtue throughout the Remix, it comes as something of a surprise when he goes on a machine-gun revenge frenzy at the climax: there's been no build-up to it at all. For all its dramatic faults, the Indian version at least makes Jay an anti-hero with a defined set of flaws, so his actions at the end make a bit more sense. Not much more sense, though: it has to be said that in both versions, the plot is driven entirely by movie logic rather than the logic we use in the real world. (The sort of logic where watching policemen burn to death is fun, for example.) It requires the confidence of a Tarantino to make a film that's so completely based around other movies rather than real life, and neither Anurag Basu nor Brett Ratner have that confidence.

The Remix isn't a complete disaster: most of its best features are in the reworked soundtrack, from a moody Graeme Revell score (much more subtle than the original by Rajesh Roshan) to the careful redubbing/reshooting of the Hindi dialogue into English. But the result doesn't really add anything to Kites other than a layer of narrative confusion. And its plan to open up Bollywood cinema to Western audiences appears to have failed, at least in the UK: here, the Remix lasted just one week in cinemas before being pulled, while the original Kites is still going strong nearly a month after its release. The Indian film industry appears to be doing quite nicely without the interference of the rest of the world, and maybe that's the best way for it to be.

Maybe it's partly because we saw the remix first, but I definitely thought the original's plot had fewer non-sequiturs, the motivations made more sense internally to the film, and there were several scenes which just made no sense at all without stuff which was excised in the remix (some of which you've mentioned above, of course).

Not that I'm making any great claims for the original, but it was at least watchable, which ultimately the remix barely was.