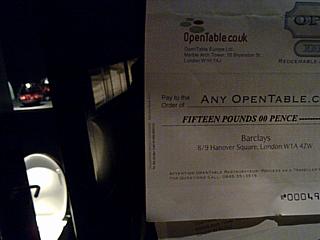 The story starts in 2003. The BBG was hitting a big birthday, and we'd agreed that dinner at top London nosh house The Ivy was the thing to do. If you've followed the link in that previous sentence, you'll have noticed that the restaurant does online booking: well, that wasn't the case in 2003, when all bookings had to be done five calendar months in advance by phone. So if you wanted to eat there some time in November, you had to hassle them from June 1st.

Do you remember June 1st 2003? Of course you do. It was a Sunday. I was away for the weekend, and it wasn't like restaurants would be gagging to take your call on a Sunday, so I gave The Ivy a call first thing the next morning. If it's possible for someone to laugh in your face from the other end of a phone, that's what the receptionist did. "You do realise we started booking on the first, don't you?"

Bottom line, there wasn't a hope in hell of getting a table for the night in question. So I picked up the Time Out Eating & Drinking Guide and started flicking through it looking for alternatives. But something in the guide's writeup of The Ivy rang alarm bells for me - a suggestion that even after you'd successfully navigated your way through their incomprehensible phone menu, the person at the other end might just decide that they don't like the sound of your voice. So out of curiosity, I asked The BBG to try calling the restaurant and asking for a table for the same date.

To this day, we still wonder exactly why she got offered a choice of sittings for that night, and I was told that they were full. Did she just talk to a different receptionist? Did they assume that being female, she was the PA for someone important? Did they snub me for sounding a bit Northern? The latter would be particularly irritating if it was true, because when we finally got to eat there the only celeb we saw was Peter Kay, pausing halfway down the stairs from the gents just to make sure that everyone knew he was there. Anyway, it was a very nice meal and all that, but the treatment I received at the time of booking rankled a bit.

Jump forward to Christmas 2005, and we're off to New York. The city that never sleeps, and never stops bloody eating apparently: so inevitably, we're looking at the websites of a number of its more interesting restaurants. We came across something we hadn't seen before in London - restaurants that would let you make reservations through their sites. And several of them all shared the same booking system, all pointing back to OpenTable.com.

So, nine paragraphs into an article about OpenTable, let's finally get around to explaining what it does: it gives you real-time access to the reservations systems of loads of restaurants from the comfort of your own computer. Enter a date, time and location, and it'll tell you which restaurants have tables available and book one for you. Providing you actually honour the reservation by turning up, you'll have 100 points allocated to your OpenTable account. Save up enough points, and you can exchange them for a Dining Cheque that can be used to pay for even more food at one of their restaurants.

The thing that impressed The BBG most about OpenTable was the democracy of it. It didn't just cover basic New York restaurants: there were high end ones on their books too. WD-50 had just been announced as one of the top 50 restaurants in the world: Megu was gathering a reputation as one of the smartest Japanese places in the city. We got into both of them with just a few clicks of a mouse. Unlike our experience at The Ivy, we didn't have to go through some sort of filtering system before they'd let us in.

As we'd had to open an account with OpenTable to make those bookings, we were curious to see if we could use that account once we'd got back to London. It turned out we could: it just took a while. Back at the tail end of 2005, the number of restaurants in the UK that were on OpenTable was very small. Since then, we've watched that number grow slowly but dramatically, to the extent that it now takes in several hundred places in London and other UK cities. Over the last four and a bit years, we've slowly accumulated 4000 points. Obviously, it would be an almost impossible task to reference all twenty-two restaurants we've booked using OpenTable to get those 4000 points. But the important thing to note is that those points have now been converted into £30 worth of Dining Cheques, which we then used at Joel Robuchon last week (having booked that using OpenTable as well). To tie the whole story up in a neat bow, Robuchon is two doors down the road from The Ivy: the latter may have online booking now, but it's too little too late, sorry.

Since we first joined up with them, we've seen a lot of our favourite places sign up with OpenTable, and it's made the whole business of booking tables so much easier. It's a fast service, easy to use (including a special version for mobile phone browsers), and it's never let us down once. Other cheap and nasty imitators like TopTable will make you a provisional booking and keep you waiting for a day or two for confirmation: OpenTable is, as far as I know, the only site that gives you an instant response on what's available. And it works in an increasingly large number of cities, not to mention countries: if we'd been a bit more on the ball, we could have used it in Japan last month to book our table at Legato. Give it a go: you'll never want to talk to snotty restaurant staff again.

Timely writeup - I made a booking and signed up with opentable for the first time 2 days ago. My "several months in advance" booking experience was at the Fat Duck, which involved 15 mins attempting to get an answer, followed by 20 mins on hold listening to Alice Through the Looking Glass.