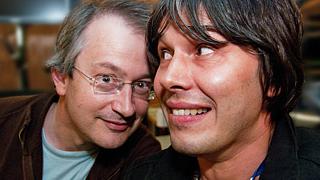 In the meantime, your Simian Substitute Site for June 2010 is The Infinite Monkey Cage. Rather like the Richard Feynman broadcasts I mentioned above, this is another science-based BBC series that I found out about long after the fact. It's a convoluted story, but here goes. Later this month, I'll be seeing They Might Be Giants performing live in London.  The show's part of See Further, a festival of science and arts to celebrate the 350th birthday of the Royal Society. (Why are TMBG playing there? Their second show may give you a clue.)

Anyway, another highlight of the festival (and one that was completely sold out by the time I became aware of it) is The Infinite Monkey Cage: a discussion hosted by TV science dreamboat Professor Brian Cox and smartypants comedian Robin Ince, with guests Alan Moore and Jonathan Ross.  This is actually a spinoff from a radio show of the same name that Cox and Ince produced at the tail end of 2009 for Radio 4 (around the time that the two of them also collaborated on Ince's Christmas show, Nine Lessons And Carols For Godless People).

Sadly, it's a lot harder to hear a radio show from 2009 than see a TV show from 1983: neither the original programmes nor the podcast summaries are available on the BBC website any more. Which means we have to resort to underhand methods. So say hello to The Cassette Archive, a collection of stuff that one person has taped off the radio and is slowly converting into downloadable MP3s. They have all four episodes of The Infinite Monkey Cage available to download: it takes a little while to navigate your way through the various links to Megaupload, but once you've got the hang of it it's not too difficult. You'll be rewarded with four half-hour programmes in which Cox and Ince discuss matters of science with comedians, scientists and other interesting guests.

Now, how about those comments?

I didn't want to mention this in the main article until I was sure of the dates and times, but now I am. So: series 2 of The Infinite Monkey Cage starts on Radio 4 on Monday June 14th at 4.30pm. There'll be four episodes in total, and each should be accessible via the Beeb's iPlayer for a week after transmission at http://www.bbc.co.uk/programmes/b00snr0w

And I'll be uploading the new series to The Cassette Archive as they are aired too!

i am a longtime fan of your blog, and YOU SOOO SOOO SOOO SOO DESERVE THIS! you didn't stick out at all, you were more than one of the perfect choices to take this amazing day of all things Chanel. ALSO you of all people truly appreciated this, i can only imagine the outits you began to think up being surrounding by all of this. can't wait for part duex! eeeeeek

Why you don't post the entire potcast collection from these series ? I'm really curious about the monkey cage problem.

Feynman Lectures were the inspiration of too much people around the world, so do I feel passion for his reviews, books and all he did. Richard is the kind of person we feel admiration since moment you see and reading a production of him.