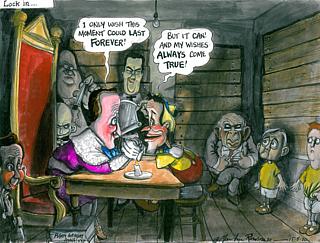 "This is a Book Festival rather than a Literature Festival, isn't it?" Martin Rowson makes an important point at the very start of his talk, which looks like it might well be my only visit to the Book Festival this year. Because when I go to Charlotte Square, it's frequently to hear people who don't work primarily with the written word. Last time I came here in 2008, it was for a talk by artist Dave McKean: this time, it's political cartoonist Rowson, being interviewed by his Guardian colleague Steve Bell.

Bell's acting as a guest curator for part of the Book Festival this year, and he's chosen to interview three of his heroes in the field of graphic storytelling: Rowson, Garry Trudeau, and Alan Moore. (Sadly, I've got scheduling clashes for the latter two, otherwise I'd be there like a shot.) It's a splendid selection of interviewees, but it's somewhat compromised by the revelation that Bell isn't really that great an interviewer. There are long gaps while he tries to work out what question to ask next, and he's obviously finding it hard to stick to an overall structure. Happily, Rowson appears to be one of those guys who can talk for England, and keeps the whole thing bubbling over nicely with occasional interjections from Bell.

Rowson really earns his money with the opening slide presentation, in which he discusses his approach to depicting the new UK administration. The trick of the caricaturist is to reduce their subject down to their smallest components, while still keeping them recognisable: so Bell, for example, has chosen to portray David Cameron as a jellyfish, while Rowson has gone for the Little Lord Fauntleroy look. But what to do with Nick Clegg? Rowson shows a few early attempts at trying to capture him, but didn't really nail him until the TV debate ("you need to see them moving"). At that point he had his image: Clegg as Pinocchio.

Rowson then goes through the first three months of the coalition, and shows in a series of cartoons how that basic image has evolved over time. He's been able to take the narrative of Pinocchio and merge it into current events: at the same time, the Fauntleroy and Pinocchio characters have got smaller and smaller, reducing the Government to a collection of children and puppets. As Clegg has become more and more sidelined, Rowson's been able to play with the idea of one of his key characters being made of wood, as Cameron recycles his severed limbs for croquet hoops or a holiday deckchair. In a brilliant verbal image, Rowson suggests that political cartooning is just another form of voodoo: "you're doing damage to someone from a distance with a sharp object."

As Rowson says in the subsequent talk, the British have had a tradition of this sort of visual satire for over 300 years: his own introduction to it as a child came from finding an old history book with illustrations by the greats like Gilray. He suggests the best cartoonists are fuelled by a combination of arrogance and sloth - "we think we're really great, and we're too lazy to do anything else." And there will always be an audience for their work, because people enjoy seeing their leaders being rudely ridiculed. It's a point demonstrated in the closing minutes, where someone asks a question about the Labour leadership candidates, and Bell and Rowson start viciously dissecting them in terms of their wonky noses and funny eyes. 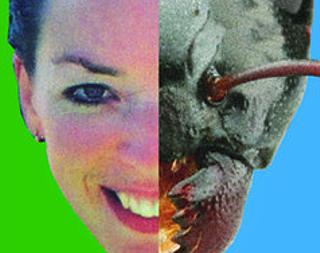 Over at Stand 2, there's an afternoon stand-up double bill of Bridget Christie and A Ant. Ant is, astonishingly, the only ant comedian on the Fringe this year: inevitably, a large part of her set is devoted to a rant against the antism inherent in the current comedy circuit. She's been forced in the past to work as a character comic, because promoters think that nobody wants to hear ant jokes. Her collection of, ooh, dozens of ant jokes may prove them wrong. Or it may not.

Christie herself comes on after a slightly awkward changeover, and by comparison seems much happier with her lot. She gently rabbits on about domestic inconveniences: having bought her husband a cat as a present, she has to deal with the problem of its litter tray, which gradually escalates to include the complaints department at Sainsbury's. If you're like me, there's a guilty realisation that creeps over you during this routine: because Christie's unnamed husband is fellow comedian Stewart Lee, and you find yourself looking for similarities in their material and delivery, even though that's a somewhat rubbish thing to be doing. (If only there was some sort of word for it: like 'antism', but referring to women.)

Nevertheless, those similarities are there, even if you refuse to believe that comic technique is sexually transmittable. Christie has Lee's tendency to stretch out a running gag a little longer than is comfortable, and frequently deconstructs the audience responses to individual lines and routines. But when Lee does the latter, it's part of the slightly arrogant character he's developed for himself: Christie's got more of a vulnerability to her, and it's hard to tell if she's genuinely disappointed when certain lines don't get a big laugh, or if she's just taking the piss. Still, it's an enjoyable enough hour, particularly if you get in on a two-for-one deal (the Stand seems to be running an awful lot of these right now).

After a rather nice early dinner at Urban Angel, looking through the window and watching the Edinburgh rain lash down in the way only it can, we swim over to the other side of town for Celebrity Autobiography at the Gilded Balloon. It's a simple concept: celebrities write their memoirs all the time, and some of them are absolutely terrible. So, take the most terrible ones, and get a changing collection of comedians to read them out sarcastically without any additional comment. Slightly smug fun ensues.

It's a patchy show, and utterly at the mercy of the performers who are available on the day. In previous weeks, the show's had some high profile American guests like George 'Cheers' Wendt and Michael 'Ugly Betty' Urie. The Yanks appear to have gone back home for the final week, but the British talent (headed up by an enthusiastic Phill Jupitus) throw themselves into it gamely. The best results come when there's a huge disparity between the subject and the performer: James Lance reading Eminem as a posh Englishman, Mike McShane recounting the lovelife of Tommy Lee from Motley Crue, or the three members of Destiny's Child represented by Bridget Christie (again), Tiffany Stephenson and Jupitus (who inevitably grabs Beyonce for himself).

But it's a lumpy mixture of styles that never quite comes together. Some of these memoirs have obviously been written with a knowing wink to the reader (I'd suggest Tommy Lee comes out of this particularly well), while others have obviously been written by idiots. In a show that's only an hour long, having to dip into Peter Andre's autobiography twice just seems like shooting fish in a barrel, not to mention incredibly lazy. You can see why this is an easy formula to sell to punters - they've already got the West End run booked - but you'd hope for something a little more imaginative. 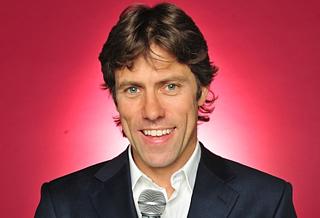 Let's recap on John Bishop. He's first mentioned in these pages on August 19th 2007: an unknown Liverpool comedian doing a ten minute slot on Mervyn Stutter and coming out of it very well indeed. We catch his solo show the next day, and it's a warm and funny account of his journey from a pharmaceutical salesman to a stand-up comic, performed in that Portakabin that the Pleasance laughably considers to be a venue. We're impressed: we think he'll go far.

Three years later, Bishop is now taking bookings for a London Christmas show at Wembley Fucking Arena. He's come a long way from that Portakabin. But as he points out at the start of his latest Edinburgh show, held in the 1000-seat glory that is McEwan Hall, he doesn't want to become one of those comedians who's too big to do a full one-month run at the Fringe.  (At least, not yet...) Bishop's best material has always come directly from his own life, so this show is basically summing up his career to date, and in particular the couple of big telly breaks that have propelled him into the public eye with ludicrous speed.

Inevitably, with his arena dates and his prime-time BBC1 show, the anti-Bishop backlash has already begun. And several of the Pals went to this show with a certain degree of trepidation, worried just how much Bishop has had to compromise his act as a result of his meteoric rise. As it turns out, not that much. He's as surprised at that rise as we are, and the show becomes a series of anecdotes on how he's tried to keep relatively sane and normal: hobnobbing with Hollywood stars, while still trying to keep close to his mates and family.

His storytelling skills are as strong as they ever were, and there are plenty of big laughs to be had. But you suspect that he's taken the idea of 'ordinary bloke coming to terms with success' as far as he can with this year's show. As it stands, a couple of routines in this set have been lifted wholesale from his 2007 and 2008 shows: although you can see why he'd want to give that material exposure to a wider audience, and it fits nicely into his ongoing narrative. But as his venues get bigger and bigger, his direct connection to that audience - the thing I think he does better than nearly anyone else out there - is going to get lost. Aside from some dialogue with a shouty bloke near the front, he barely talks to audience members at all, and I think that's a shame. It'll be interesting to see what he does in Edinburgh in 2011.