Ten of us are at King's Cross station in London waiting for the train to take us to Edinburgh. It's fair to say that when our platform number is announced, most of us spend several seconds staring at each other wondering if the Festival Madness has kicked in early this year. But, astonishingly, it hasn't. King's Cross is undergoing a fair bit of redevelopment at the moment, and in order to accommodate the changes a new temporary platform has had to be opened. As they don't want to screw up the existing numbering system and confuse the punters who've been using the station for decades, they've decided to call it platform 0.

In a station that's already notorious for having a platform 9.75, this is hardly a big deal: nevertheless, I'm so astonished by this discovery that I forget to take a picture. Happily, this turns out to be the biggest surprise of our journey to Edinburgh - everything else passes off more or less without incident. By 2.30pm, we're off the train and in the Waverley taxi queue. By 3.00pm, we're at our student flats just in time for the start of check-in. By 4.00pm, we're all in our rooms making our beds and - more importantly - getting the internet enabled. By 5.00pm we're back from our first shopping run and we've got the kettle on, watching as Charmian and Eve's car pulls in to bring us up to our full compliment of twelve.

And by 6.30pm we're on the streets walking to our first show, at which point the day's gloriously sunny weather comes to a screeching halt and the rain starts to fall. That's probably the least surprising thing to happen to us today. 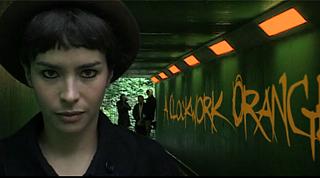 My first show at this year's Festival is one I'd committed to a while back. Last March, in fact, when I awarded Fourth Monkey Theatre Company the honour of being my Simian Substitute Site for the month. They were in the news because of their new production of Anthony Burgess' A Clockwork Orange, which led me to a tricky decision - should I catch the show during its London run, or wait for its promised appearance in Edinburgh? I decided to do the latter. It made for some slightly hairy scheduling when it turned out that Fourth Monkey's time in town only overlapped with mine on one night, but at least I made it there for their last performance.

We all know Burgess' story, of course - and if we don't, we know Stanley Kubrick's film, which notoriously deviates from the text in one or two key aspects. Steven Green's adaptation, as its full title implies, is aiming to be more faithful to the original. It's the story of juvenile delinquent Alex, who walks the streets with his associates Pete, Georgie and Dim, fighting, abusing or raping anyone who gets in his way. The education system can't help him: a spell in confinement won't change him. Can more drastic scientific methods get Alex back on the right path?

Kubrick's film gave cultural notoriety to Burgess' story by focussing heavily on the first half - revelling in Alex's catalogue of atrocities - and giving much less emphasis to the second half, where there's a whole debate to be had about the morality of what happens to him. Green tries to redress the balance in this production, but realises that the film has left an indelible set of images in people's minds, meaning that he'll have to do some radical things to the play to overcome our memories of the movie. The obvious one - given the large number of women in the ensemble - is some interesting gender-blind casting, most notably in Amy Brangwyn's portrayal of Alex. Brangwyn is terrific: she's got a huge emotional journey to take Alex through, and she does it without ever putting a foot wrong. The other cast members - sadly uncredited due to the lack of a programme - all double and treble up like crazy, and there isn't a weak link in any of them.

Where the production is on less steady ground is in a couple of decisions Green has made in the adaptation itself. In the book and film - and, to a lesser extent, the 1990s RSC production which featured Phil Daniels in the lead - everything is tied around Alex's narration. It's not lazy storytelling: Alex is a rotten little sod by anyone's standards, and we need to have him telling the story to give the audience a way of empathising with his actions.  Brangwyn's Alex never addresses the audience directly, so we're always kept at a distance from her. She does everything she can to humanise the character, but when you've got a protagonist who's raping women with umbrellas (well, you did ask, Eve), that can only get you so far.

There's a further distancing effect from the frequent use of musical numbers. They're a sneaky way of bringing Alex's favourite composer Ludwig Van into the story, and echo nicely with the Shakespearean cadences of the character's dialogue: but there are far too many of them, and they either slow down the story or tell us things we could already have worked out elsewhere. It's a shame, because the cast are hugely enthusiastic, and the look of the thing (in terms of design and choreography) is sensational: but it doesn't quite come together as a completely satisfying piece of theatre. A further trudge across wet Edinburgh takes us to the Assembly, and brings home the point that we've scheduled our meals for today really badly. While we queue for our next show, The Belated Birthday Girl sends me off in search of snacks. The best the Assembly bar can offer me is crisps: and unfortunately for her, the only flavour available appears to be haggis and black pepper. The bar staff are unable to tell me if they're vegetarian or not, so we have to sit through Christ On A Bike: The Second Coming with somewhat rumbling tums.

Yes, it's another Edinburgh visit to a Richard Herring show: and those of you who've been following our mutual adventures over the years will have realised by now that this is a show that Herring first performed here in 2001. Why revisit it nine years later? Well, it seems that he didn't manage to record it first time round, and wants to get the show back in his repertoire so that he can make a DVD of it. So Herring isn't averse to the idea of recycling old material to make cash off it. Which is why I thought I could get away with sneaking a subliminal advert for my books into his show programme, by making a donation to his Scope charity appeal under a carefully crafted pseudonym. See if you can spot it above.

As for the show itself, it's difficult to compare it directly against the 2001 version: I can remember the big setpieces, but not too much of the detail. The basic premise is still the same - atheist Herring looking at his obsession with Christianity, and discussing the ways in which, when you get down to it, he is better than Christ. The setpieces are pretty much as they were nine years ago, including the show-stopping feat of memory involving the opening page of the New Testament. Some of the individual gags are less relevant than they used to be, including the Mother Theresa gag I casually spunked away in my 2001 review. Apart from a nice reference to last year's Hitler Moustache show at the start, there aren't that many bits in there that he couldn't have written nine years ago.

But here's the thing: Christ On A Bike was the first of Herring's stand-up shows that worked as a through-composed spoken word piece rather than just a series of gags. It's a form he's worked in frequently since, with increasing returns each time. What The Second Coming adds to the original is eight years worth of experience in telling these stories on stage. He's now much more confident in his ability to hold a room without banging out a joke every few seconds: the more reflective sequences towards the end of the show are a testament to that. But there are still plenty of jokes throughout, in varying degrees of appallingness as we've come to expect from the man. A fine hour's worth of only slightly blasphemous fun for all.

And in case you were wondering, we eventually manage to get a slap-up South American nosh at late diner El Barrio. If Herring was all he says he is, he could probably have done something similar with loaves and fishes, but we'll let him off for now. We're fed, watered and back on the streets a little before midnight, just in time to witness the traditional ceremony of attempting to blow up Edinburgh Castle with fireworks.

Nick - The first night show traditionally plunges you into the melee that is the Edinburgh Fringe. And Frisky & Mannish, our first night show, plunged further than most down the ladder of so-called entertainment. We had enjoyed a beautiful summer's day on our train journey here, even extending to our arrival at Waverley. By showtime it was pouring with rain, a special horizontally falling rain aided by the lazy wind (another Edinburgh speciality). With the entrance to the venue a grotty thoroughfare off Cowgate well used as a urinal, we were really looking forward to a show that lifted our spirits. It was dire from start to finish. When the artists have to get you standing up after ten minutes to wake the dead, the show is in trouble. The only positive is, we have set the bar so low, the only way is up for the next show...

Lesley - Tayo Aluko (and friends) are in Call Mr Robeson at Zoo Southside, a one man show of the world-renowned mid-20th century black singer, actor, film star and very politically active Paul Robeson. It was the latter which got him into serious trouble with the House Un-American Activities Committee. First rate performance and a timely reminder of the very different, but extremely significant political landscape of that period. Plus, of course, some of the songs which made Paul Robeson so famous, including Old Man River from Showboat. Check for tickets - Sunday was sold out, and I was lucky to get a return.

This article leave me a deep impression.It's wonderful,I like it very much.