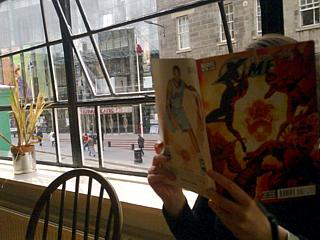 Remember that nightcap we finished off with on Friday night? Well, it sort of went on till 2am on Saturday morning. Which is always a good idea when you've got to be packed and out of your flat by 10am. Still, somehow, we all manage it. This is the first year I've spent at an Edinburgh University flat rather than a Napier one, and I have to admit they've done a pretty good job. Thanks to everyone on the site for all their help: assuming you don't do anything stupid like move your student term times to match Napier's, we'll probably see you again next year.

We all head off in various directions at 10am, most of us having a day to kill before reconvening for a 5.30pm train back to London. As far as The Belated Birthday Girl and I are concerned, after a slightly disappointing breakfast at the Treehouse Cafe it's off to our first free event of the day. And unlike our previous ones, it's arranged by neither Laughing Horse nor Peter Buckley Hill: other people do free events as well, you know. Art exhibitions on the Fringe are frequently free, for example.

...And The World Went Mad For Moomins! is - if you believe the Fringe programme - a celebration of the 65th birthday of Tove Jansson's popular cartoon characters. Although in retrospect, the second sentence of the programme writeup should have rung alarm bells: "Choose from a huge selection of books, accessories and gifts..." It's an exhibition, why should you have to choose anything? Well, because it's not really an exhibition. It's being held at DesignShop UK, a retailer specialising in trendy and retro knickknacks for the home, and that includes a wide variety of Moomin merchandise. They've done nothing more than take all their Moomin-related stock and move it into the centre of the shop.

There's nothing wrong with a retail outlet wanting to get in on the Fringe action. One of the free events we saw in 2008 was Mr IMPOSSIBLE, an exhibition of Philippe Starck furniture set up inside Inhouse. But at least in that one, an attempt was made to put Starck's designs into some sort of context. At DesignShop, apart from an interesting little collection of character sketches, all you get is a collection of items that would have been for sale anyway. There's potential for an interesting study into why the Moomins are still popular, particularly when you realise just how surreal and bleak some of the stories are. But you won't get any sort of analysis here. There's nothing now to stop the Disney Store on Princes Street getting themselves a Fringe venue number next year and passing themselves off as an exhibition too, if these chancers can get away with it.

We calm down after this disappointment with a nice coffee at Grind House Cafe, and an even nicer lunch at Spoon. During the latter, I take in my second free event of the day - one that can only be accessed via my mobile phone. (The notoriously mobiphobic BBG refuses to take part in any of this nonsense, and instead does her bit for International Read Comics In Public Day by taking refuge in her copy of Astonishing X-Men #35.)

Actually, it's an event that I've technically missed already. For the last couple of weeks, comic Tony Cowards has been holding a event called No Ticket Required: at 2pm each weekday, he's been sat in front of his computer throwing out one-line gags on Twitter as a kind of virtual comedy gig. The Book Festival has been working in similar territory this year, inviting people to contribute 140-character short stories using the #UnboundEd hashtag and having the best ones read out at their live events. But Tony Cowards is taking it one stage further: he's writing all these jokes himself, and even taking requests for subjects during the live sets. And to complete the Free Fringe experience, he's got a PayPal bucket you can throw money into at the end.

The last one of these sets was performed yesterday, but obviously it's still possible to revisit every single show in the run by scrolling backwards through the Twatfeed at @noticketshow. Working through the tweets from the final show, I do wonder if there's anything to be gained from experiencing this in real time: apart from the minor thrill of seeing almost immediate responses to requests for jokes, I'd imagine that half an hour of continually hitting the refresh button would get very very dull by the end. Still, Grounds has a nice collection of one-liners, and the gag he comes up with when asked to do a joke about Ireland results in me making a wildly embarrassing noise in the middle of Spoon. 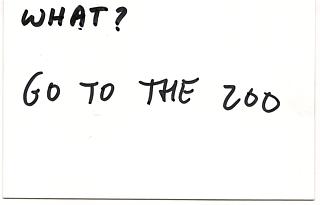 From there it's on to the City Cafe for our last two free events of the day, and our last two events of the Festival. The first one features Ivor Dembina, a comedian who's had a long history of coming to Edinburgh and performing free shows. His five-years-in-the-making study of the Israel-Palestine situation, This Is Not A Subject For Comedy, is playing at this venue during the evenings: but Ivor's main worry is how he follows that one up. Will his next show take another five years out of his life? He doesn't want it to: hence Ivor's New Show, an unapologetic workshop for his next project, so much of a work in progress that he refuses to take any more than £1 in the collection afterwards.

My favourite Edinburgh shows tend to involve some sort of conspiracy between the performer and the audience, and that's just what Dembina achieves here. He warns us up front that he's going to ask us lots of questions, to see if our responses trigger something that could lead to new material. Once he's explained the basic rules of the show to us, he refuses to let any latecomers in, which is a smart move: he needs an audience that completely buys into this idea from the word go. And then the show turns into a gentle conversation between us and Ivor, as he asks us to think about a few things (What clubs do we belong to? Have we ever changed our minds about anything?) and rambles on from there.

Sure, it'll be interesting to see if Dembina gets a new show out of this process, but I think the journey is just as entertaining as any potential destination he may reach. He's a friendly presence on stage, and coaxes interesting anecdotes from audience members about their hobbies and religious beliefs. On the way, he drops a few bits of entertaining gossip - apparently Russell Howard is one of the best footballers on the Fringe comedy circuit - and even manages to chuck in a couple of proper old-fashioned jokes. I haven't seen Dembina in his natural Hampstead habitat for a while now: I must go again soon.

We stay in the City Cafe for our final event, a magic show entitled Time Warper. There's no specific age recommendation given in the programme for this one, and The BBG panics when the front row suddenly fills up with children. Not to worry: Oliver Meech has come up with an all-ages magic show that doesn't patronise the grown-ups too much, while ensuring that the occasional gag about premature ejaculation goes well over the heads of the kids. (I could have phrased that better, I know.)

Coincidentally, we saw Penn and Teller last month when they brought their Vegas act over to London for a short run. It seems massively unfair to bring them up in comparison with a comic magician who's working for free in a pub basement, but there are similarities. P&T tell you upfront that they're using trickery to achieve their effects, and so does Meech. The difference is, the trickery that Meech claims to be using is time travel. Over an hour, he shows us a series of illusions that he's carefully planned by going back in time and rigging them up beforehand, using techniques he's learned while searching for his girlfriend who's gone missing somewhere... or somewhen.

If the background story doesn't quite hold up to intense scrutiny, at least the tricks are entertaining. And I even get to go on stage and help Meech: he uses the throwing of a rubber brick into the audience to pick four people at random, and I end up being the third. (When I throw the brick to select the fourth one, I accidentally hit a girl in the face. Sorry.) It turns out we've been selected for a cold reading trick: each one of us secretly writes on a piece of card what we'd do on our last day on earth, and he tries to match up cards with people. The BBG suggests that my somewhat childish answer (see picture above) was an attempt to fool Meech into thinking that it had been written by one of the kids, but I don't think that was foremost in my mind. Still, the moment when he passes the card in front of me and detects something that proves it's mine is fun to be a part of.

And then we're off. Eve has already left Edinburgh by car: Nick and Charmian bump into us as they collect their bags from Waverley left luggage before taking the plane home. The rest of us have a relatively painless five-hour train journey back to London, notable for everyone being too tired to do anything much apart from stare at magazines or doze a little. I certainly don't have the energy to do much writing, which is why this particular piece is appearing online some three days after the event.

But it's all over now. (Apart from the traditional Postscript from Spank's Pals, which should be appearing here in a week or so.) Good or bad Edinburgh? Well, I'd have to say good, on the whole. There were disappointments, mainly down to people I left it too late to see (Kevin Eldon and Emo Philips are the two that spring immediately to mind.) I'm a little sad that I was behind the curve in terms of the Traverse season this year, and missed all the big hit productions - apart from Daniel Kitson's It's Always Right Now Until It's Later, which was an early highlight of the week that was never really surpassed. A few shows were hard work to watch, but like Ivor Dembina I think Edinburgh's more about the travelling than the destination.

And, of course, there's always my major publicity stunt at Collings and Herrin to look back on. Even though it hasn't resulted in a single sale for my book yet. Still, the video above proves that on Sunday August 22nd, I was responsible for a pretty big audience reaction at a Fringe show. True, to anyone unfamiliar with the various running gags that the C&H podcast is structured around, it just sounds like a straightforward bit of crude obscenity. But I'll take my laughs however I can get them. Being a monkey, and all.

Look out for their final thoughts in the 2010 Postscript, coming some time in early September.