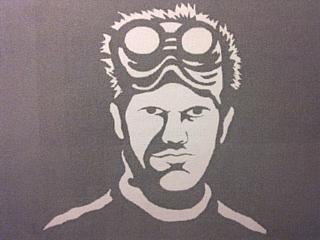 Here's a direct quote from the programme for our first show of the day. "For those of you who have not seen Joss Wheadon's internet phenomenon, Dr Horrible's Sing-Along Blog, it is a musical tragic comedy about a super villain who's main goal is to become a member of the Evil League of Evil. He falls in love with a girl named Penny and then accidentally introduces her the his arch nemesis, Capitan Hammer."

Doesn't it worry you that a school production has a programme note that's barely literate? (Plus, as The Belated Birthday Girl was inevitably swift to notice, they spell Joss Whedon's name wrong, and don't mention co-writers Maurissa Tancharoen and Zack and Jed Whedon at all.)

As you might have guessed from the throwaway reference above, we're back at the Church Hill Theatre for our regular appointment with the American High School Theatre Festival. This year, we're seeing the work of the Guilford High School Theatre Arts Program, and you have to admire their ambition on this one. Rather than take an existing stage musical, they've adapted a 45 minute internet short film themselves, on what are obviously limited resources. I'd expect they assumed that the legendarily rabid Whedon fanbase would flock to it regardless, although that doesn't seem to be the case at the 10.30am performance we attended.

As is always the case, there's a huge amount of enthusiasm visible in the performances, with David Galante in particular throwing himself into the arrogantly dorky role of Captain Hammer. But the production's bitten off a hell of a lot more than it can chew. I jokingly suggest each year that one of the advantages the American High School crew have is access to cheap labour: the last couple of shows of theirs I've seen have had dozens of people on stage. Dr Horrible has four lead parts and a four-woman chorus: things are looking very quiet on that stage for long periods of time, and give you the space to realise what isn't working.

Dr Horrible was a very low-budget film, but it was still a film: and there are a couple of sequences here that completely fail to transfer to stage, making them totally incomprehensible to anyone who doesn't already know the story. Any stage show with no money whose plot-initiating incident is a road accident is always going to have the odds stacked against it. And without wishing to give anything away for anyone who doesn't know the story, for that final scene to work you really need to see a horse. You can't fault this production's ambition and enthusiasm, but unfortunately you can fault quite a few other things. (Including their shameful decision to cut Captain Hammer's best line, where he carefully explains the thinking behind his superhero name: "The hammer is my penis." It's my school production of Under Milk Wood all over again.) 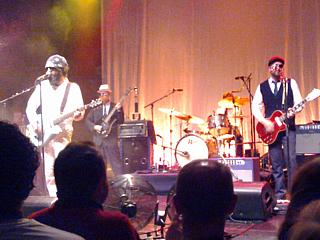 Lunch is held at The Apartment, a rather niftily refurbished restaurant from the makers of our regular Edinburgh haunt The Outsider. And while we're eating, we ponder one of the major complaints that a few of Spank's Pals have made this year: why can't you pick up a free copy of the Fringe Daily Guide any more? Sure, there are PDFs available for download, and trees are nicer when they're alive, but you need a hard copy in your bag for those occasions when you're trying to find a show that fits a specific timeslot. The only alternative you've got is to fork out 80p for The Scotsman and use the hour-by-hour listings from that.

So over lunch, we find something in the Scotsman daily listings that'll fit neatly into a small gap in our afternoon, in between various admin tasks (mainly managing the changeover as Old Lag leaves our party and Anne joins it). It's a slightly grim-sounding play called David about the London nail bombings of 1999, but it's part of the Free Fringe and so therefore worth taking a punt on. By then we've left it a little close to the start time, so we hop into a taxi and pay it £8 to speed us across town to the Omni Centre. Where we find out that, contrary to the information in the Scotsman listings and the Fringe programme, David isn't being performed today.

Bird's Eye View Theatre's production of David is, without a shadow of a doubt, the single worst thing to be seen on the Fringe this year. Audiences should stay well away from it: in fact, if you do go and see it, you'd be advised to take money out of the collection bucket at the end. Around eight quid should cover it.

Dinner at Illegal Jack's - a Mexican fast food joint that's such a brilliantly realised concept you wonder why it isn't a full-blown franchise yet - and then it's off down Lothian Road to the HMV Picture House. I'm assuming from the name that it used to be a cinema, but for all the years I've been coming to Edinburgh it's been one of those Saturday night meat market discos with flocks of women in tiny dresses smoking outside. In the last couple of years it's been repurposed for live music, and we're seeing Eels there tonight as part of the Edge sub-festival.

Support act Alice Gold makes for a terrific preamble to the main event: a ballsy singer-songwriter who wins over the crowd within seconds of appearing on stage. Mind you, The BBG suggests that the audience just warmed to Gold because she wasn't the act who came on before her, a truly terrible ventriloquist whose name escapes me. It appears that Eels have been opening with ventriloquism throughout their current world tour, so this isn't just a special treat for Edinburgh. Still, this is the sort of thing they do: last time I saw Eels live in 2008, they opened with a screening of a BBC documentary about Mark "E" Everett's dad.

The other thing about that 2008 gig was that it was a lot quieter. On that tour, it was just E and The Chet, and the focus was on the ballad end of their impressive back catalogue. Since then, the band's output has become a little more bipolar: the most recent album I've heard is 2009's Hombre Lobo, which literally swings from delicate to ear-shattering on a track-by-track basis. Tonight's gig has a similar sort of structure, but with a little more subtlety to it: so we start off as we did in 2008, with E and Chet collaborating on a couple of pretty little tunes. All of a sudden Eels becomes a five-piece band, four of whom are playing guitars, and we're rocking out like a (slightly) less hairy ZZ Top.

The gig ebbs and flows beautifully from that point onwards, a couple of slow songs alternating with a couple of balls-out rockers. Even the more mid-tempo hits get taken up a notch or two, with Mr E's Beautiful Blues getting mashed up into Twist And Shout with entertaining effect. It's a very different show from the one I saw in 2008, but the increased energy level suits these songs just fine. It'd be a perfect show if it wasn't for the audience, which seems to pack every available species of Gig Wanker into the small area of dancefloor we're occupying: seven foot tall genetic freaks standing in front of you, fat people insisting on their right to dance, airheads who've paid £20 to talk loudly to their mates for the entire show, and a woman that I'm pretty sure smelt of actual human faeces. 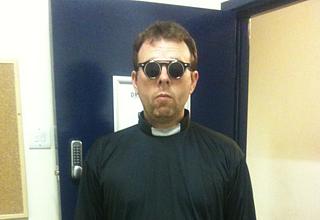 It's been a bit of a grumpy old day for me, hasn't it? And there's one more bit of grumpiness to come with the last show of the day, as I pick up my pre-booked tickets for Gutted: A Revenger's Musical from the Assembly box office only to find that they've been doing a 2-for-1 deal for personal bookings all day. Still, you may have noticed that today's been notable for things that start off promisingly but have turned to shit by the end. Pleasingly, Gutted turns out to be the exact opposite.

Danielle Ward and Martin White have written a new musical, and assembled a fun cast of Fringe comedians and pop stars to turn it into a full-blown late night romp. It opens with the wedding of Sorrow (Helen George) and Bewley (Colin Hoult). She's a quiet young girl, he's a rich obnoxious bloke: it's hard to see where the attraction lies. But we quickly discover that Bewley killed Sorrow's parents when she was young, and this wedding is just the first stage in her terrible revenge.

There are a couple of rough edges in the production - as with Dr Horrible earlier, even though everyone's miked up, they still can't quite get the sound balance right. But unlike Dr Horrible, the enthusiasm of all concerned actually does get you over the rough edges. There are some great performances in here - Colin Hoult pulls off several quick change miracles as he plays multiple members of the Bewley family, Michael Legge overacts just enough as the vicar, and Jim Bob from Carter USM contributes a one-scene cameo.

The songs, surprisingly, are pretty damn good too: a lot better than you'd expect from a musical put together by a group of comedians. It's possible that the Edinburgh late-night atmosphere is part of what's made Gutted such an instant hit at this year's Fringe, and that it may not quite work as well in the cold light of day. But I'd be happy to see it get some sort of transfer so we can be sure about that once and for all.

The Belated Birthday Girl - It had to be done. When Spank told me that there was an American High School production of Dr. Horrible's Sing-Along Blog, we had to go see it. As a nicely self-contained 45 minutes, it would seem tailor-made for an Edinburgh fringe production, so you can see why the idea would appeal to a group to perform it. But sadly, the constraints of cast, budget and technology meant that this performance didn't quite work. There were several scenes which I would think made no sense at all to anyone who hadn't already seen the internet series, and that seems a major failing. But the two central performances - Penny, played by Emma McCabe, and especially Dr. Horrible, played by Michael Sullivan - were good, and most of the musical numbers were performed well (although having the Bad Horse songs on a muffled video projection was another problem). So although I'd give credit to the Guilford High School for wanting to do this, and to the performances overall, I think the shortcomings in the production showed this needs a bit more effort to adapt it for stage.