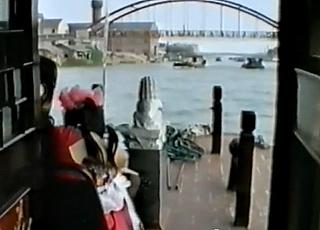 So far in this collection of Retubing posts (see the first one for an introduction), all the videos you've seen have been assembled digitally. Camcorder footage was converted by one means or another into video files, and then edited on a PC using Corel VideoStudio or some equivalent bit of software.

But decades before I was playing around with video, I was doing similar things with audio. And generally, that involved lots of tape-to-tape copying with judicious use of the pause button.

Well, before I picked up my first computer in 1997, my initial experiments in video editing worked in exactly the same way. So it amused me last year to post up some videos I'd made back in 1993 on my China trip, using two VHS decks, a basic audio mixer and (if the end credits of the final feature are to be believed) a preposterous 40 days of editing time.

The production history of Waiting For The Great Leap Forwards has been fully documented here before, and I don't intend to repeat myself. But there are two important factors to note: the China 1993 tour was my first ever holiday outside of Europe, and the first one where I was carrying a camcorder with me. It's no wonder I went a little nuts with the video, although to be fair there were at least four other guys on the tour party who were as bad as me.

Still, just thinking about how I assembled that rough footage into a hundred-minute-long feature gives me the screaming abdabs today. Record from the original VHS-C camcorder tape onto a full-size VHS, using the pause button to cut and rearrange the footage. (See all those irritating black and white frames that pop up during shot transitions? That's where they come from.) Then record the result from that VHS onto another VHS, with an audio mixer in between the two decks to allow the live addition of voiceover and music. (Which had to be done one section at a time, and if anything went wrong I'd have to start the section again.)

Then, sixteen years later, it was even more of a palaver converting it into YouTube form. Record the entire VHS film onto a DVD with the aid of The Belated Birthday Girl's DVD recorder: extract the video file from the DVD: run it through VideoStudio to cut it into a dozen or so short films: redub the films to remove the embarrassing narration that took so much effort back in 1993: export the results to MPEG files for upload to YouTube: and then, most recently, take those MPEG files and re-render them again because I'd accidentally stretched them into 16:9 first time round.

With all the processing steps this material's been through, it's a wonder anything's visible on screen at all. And yet, somehow, it still seems to just about work. This one in particular, shot on a dragon boat cruise along the Grand Canal, has a rather dreamy atmosphere to it, helped in no small measure by the music (part of Carter Burwell's score for an obscure 1992 movie called Storyville). The less sedate section at the end shows what rush hour on a Chinese canal looks like: and bear in mind, this was on a Sunday.

There's another one from the same period that I shot on the Li River, with music by Ryuichi Sakamoto. However, I'm a bit loath to highlight that one, because last time I posted it up on YouTube, the commenters decided that using a Japanese composer on a Chinese film makes me a BIG RACIST. Maybe losing all my old YouTube stats and comments wasn't such a bad thing after all...