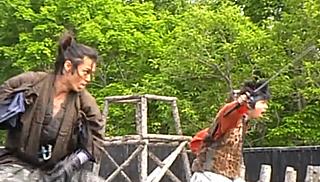 As I slowly continue re-uploading the videos that used to be in my old YouTube account before The Great YouTubeocalypse, I'm now up to the films we made on our Japan 2008 holiday.

That year probably counts as the peak of our YouTube activity in terms of holiday movies, I think. By the time we'd finished, we had a collection of 15 short films - some of them were shorts we'd made, some of them were other people's, and a couple were things I'd filmed off the telly just to show you the sort of stuff we were watching in our spare time. I put them all into one big playlist, and even rounded it off with a compilation of clips hacked into an end credit roll with an Anna Tsuchiya soundtrack.

Unfortunately, those two things I filmed off the telly ended up being 66.66667% of the reason why my YouTube account was shut down. So you won't be seeing those again, or the playlist end credits which quote them. But there are a few films that I think it's safe to repost, and this is one of them.

Ninja! was filmed over the course of the day we spent at Edo Wonderland, the theme park in Noboribetsu. If you're not concentrating very hard, you could come away from there thinking that all Japanese people are either ninjas or whores. This video, as you'd expect, focusses primarily on the former. It includes footage from four different attractions in the park - the exhibition of costumes and weapons, the moodily-lit (and therefore fuzzy as hell) indoor ninja show, the spectacular outdoor show where all the best bits come from, and a sort of haunted house affair with hidden traps and wonky floors (which is where I shot the post-credits demonstration of ninja shitting techniques).

As I was shooting it, I was already half-editing it to the 7 Seconds Of Love song in my head.  A slightly risky proposition, given that one year earlier the band had pocketed an unspecified amount of money from Coca-Cola following the unauthorised use of a suspiciously similar song in a Coke advert. Still, at least I gave them a credit, and will continue to do so. (Not to mention a plug for the excellent Danger Is Dangerous

album it came from. Can we have another one soon, please, Joel?)