Simian Substitute Site for September 2010: Where The Monkey Sleeps 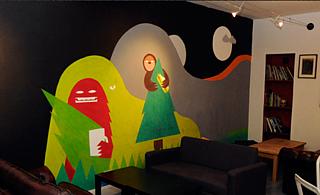 Internet: This August, as noted in comments, was the month when one of my YouTube videos finally hit a quarter of a million views. I'm not going to link to it here, because this August was also the month when my YouTube account was terminated with no warning, and all the videos in it were taken away. It's a three-strikes-and-you're-out deal, and over a period of four years I'd managed to accumulate three copyright violations, all related to Japanese-owned material. Operations are slowly being migrated over to new user account TheSpankTM, but The Felix Project will probably need to be put on ice for now. Which is a pity.

Music: Bloody hell, Propaganda. You only made one album worth a damn - 1985's A Secret Wish - and now I own three separate copies of it. I bought it on cassette when it first came out, and loved how the bombast of the ZTT sound was made even more fabulous by the simple idea of adding foxy German ladies to it. When the time came a few years later to replace it on CD, imagine my frustration when I discovered that they'd decided to remix most of the songs for the digital medium, and not always for the better. And now we have the 25th anniversary reissue, featuring both versions of the album plus a selection of outtakes and bonus tracks. I'd be moderately cross if it wasn't for the fact that it still sounds magnificent.

Telly: I appear to be one of the last people in the world watching Mad Men from the beginning, thanks to the current set of repeats on BBC2. I'm nearly halfway through season one, and liking it quite a bit. I started off thinking that it's incredibly strong on character and period atmosphere, but a little light on plot. However, I'm just getting to the point where hints are being dropped that there's more plot than first meets the eye. So all the rest of you who've watched this already are not allowed to talk to me for the next few months. It's probably safest.

In the meantime, your Simian Substitute Site for September 2010 is Where The Monkey Sleeps. I found this one via the scenic route, I must admit. I don't know if you've noticed that we were in Edinburgh recently? Inevitably, The Belated Birthday Girl used this as an excuse to explore the city's restaurants, and to cut a long story short we ended up hitting The List Eating And Drinking Guide like it owed us money. I've already mentioned a few of the places where we ate: The BBG may go into more detail in the forthcoming Edinburgh Postscript.

But one of the few drawbacks of The List's guide is that it covers both Edinburgh and Glasgow. And every so often we'd come across a place with an interesting-sounding name - to take an example purely at random, let's say Where The Monkey Sleeps - only to find that it wasn't in Edinburgh at all. Still, we have been known to visit Glasgow every so often, so we'll keep this West Regent Street caff in mind for the future.

We've had a surprisingly good run of non-spammy comments recently. How long can we keep that up? Let's find out.