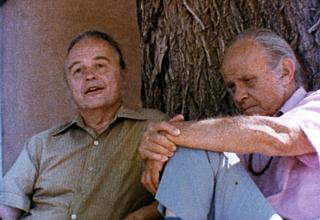 It just seems weird seeing Clyde Jeavons on a Friday. As boss of the Archive section of the LFF, he seems more naturally suited to weekends, possibly appealing to that primitive part of our brains that associates old movies with Saturday and Sunday afternoons on telly. Rest assured, you've got a couple of Sunday afternoon reviews on the way. But the Archive programme is big enough to span the entire duration of the Festival, and this year it includes - unusually, I think - a couple of archive documentaries like this one.

Made in 1977, Word Is Out is heavily influenced by the radical politics of the seventies. To conform completely to stereotype, it was even made by a collective, the six-strong Maraposa Film Group out of San Francisco. (Some of them are still going strong - one member, Rob Epstein, even has a high-profile new movie we'll be looking at later in the Festival.) The title and location should have given you a hint by now: Word Is Out covers the up-and-coming gay liberation movement, looking at where gays have come from and where they think they're going to.

In what was apparently a radical step for the time, it's little more than a collection of on-camera talking head interviews, in which 26 gays and lesbians talk candidly and unemotionally about their lives. They're all very different from each other, which was probably the point of the movie: a couple of the interviewees play up to the queer stereotypes of the times (and freely admit they're doing so), but these are all real people with all the differences you'd expect. Interesting, though, to see how many of their stories involve them going through a painful period of loveless straight marriage before they realised where they were going wrong.

It's a film whose meaning has changed a little since it was first made. Back in 1977, it was the first time that gays and lesbians had told their own stories on the big screen, which must have been one hell of a revelation to the viewer back then. (Possibly more to some viewers than others - a couple of interviewees took this as their opportunity to finally come out.) And time and again, the point is made that there's no single party line that all of them toe. The interviewees are obviously a carefully picked sample, but the message that comes across from all of them is crystal clear - they're all making it though life and are happy with their choices. How about you?

It's still possible to appreciate the film's historical impact today, but now it's also a fascinating time capsule of mid-seventies attitudes, as the interviewees wonder out loud what the future holds for homosexuals in American society. When one suggests that it would take at least two generations for gays to be widely accepted, you realise with a jolt that two generations from 1977 takes us up to round about now, and wonder just how far we've come. Hence the DVD re-release, perhaps? 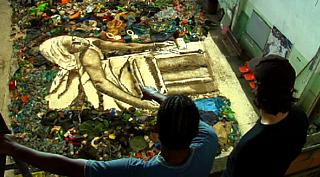 Lucy Walker was last at the LFF four years ago, with her blind-kids-climbing-Everest documentary Blindsight. Apparently producer Angus Aynsley was in the audience that night, and after the screening ended up introducing Walker to artist Vik Muniz, the subject of her LFF entry this year. It's always nice when that sort of thing happens, a filmmaker's career being given continuity by the LFF itself. (The last one like that I can remember was Patrice Leconte hiring Michael Nyman to write the score for The Hairdresser's Husband during his Q&A for Monsieur Hire.)

Muniz is the most famous modern artist in Brazil, notorious for making art out of recycled garbage. At the start of Waste Land, he sets his sights on a major source of artistic materials - Jardim Gramancho in Rio, the largest landfill site in the world. But he isn't just looking to use the garbage: he also wants to involve the catadores,  the garbage-sorting staff, people whose position in society isn't considered much higher than that of the crap they handle.

There are some interesting parallels with Blindsight - both films follow the progress of a social project aimed at the disadvantaged. Blindsight's narrative took an interesting third act turn when it became apparent that different people were involved in the project for different, sometimes conflicting, motives. Does the same thing happen here? Not exactly, although it's fascinating to see the motives of some participants change as the project progresses.

Walker's film is a staggering artistic achievement in its own right, though. I initially found myself comparing it with Workingman's Death, the Sutherland Award winner from 2005. Like that documentary, it shows you sights on a scale you've never seen before, particularly in the scenes of giant stacks of garbage being dumped and immediately swarmed over by the catadores. But Walker is careful to contrast this with the very human stories of the workers - and to synthesise the two approaches into her portrayal of the artwork Muniz eventually creates, building intimate portraits that take up the entire floor of a studio.

There's a concern early on that Muniz could be seen as exploiting the workers: not to mention the risk that they're being exposed to a high-end lifestyle that they're simply not ready for. But the sheer joy experienced by everyone as these artworks come together stomps over all your qualms on that score. And there are one or two gratifying surprises in the where-are-they-now captions right at the end. This is one of those documentaries that absolutely demands a cinematic outing beyond festivals, so it's good to hear that it'll be in UK cinemas some time in 2011. You should see it. 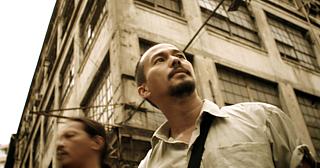 Two documentaries so far today: my final movie of the day isn't a documentary, but it does claim to be inspired by true events, as the buzzphrase has it. At this point in the proceedings, I'm trying to avoid looking up how based on truth this story is...

...so let's stick with the plot of the film for now. A short prologue leads us into the adult life of Raul (Raul Arellano), stuggling to get by in crippling poverty in Manila. Ripped off by a succession of employers, he runs through a series of increasingly desperate schemes to raise the money to return home to his dying father. He battles against bureaucracy to apply for an overseas job: when that fails, he turns to crime: and when that fails...

...well, I'd be curious to find out if the story really panned out the way writer/director Raymond Red tells it here. (The programme notes say that Red was 'inspired' by a newspaper clipping, a word that could basically mean anything.) But the film version is a shaggy dog story at heart: full of rambling digressions, with a curious attitude to its female characters and a peculiar mixture of grim pessimism with black humour.

It's held together by a twitchily brilliant performance from Raul Arellano, who keeps your sympathy throughout even in the sections where he's obviously being a bit of a dick. Red's own digital cinematography (using the cameras he shares a name with) also keeps the whole thing watchable as hell. But the big thing is this: I can forgive Manila Skies all manner of structural flaws, including a couple of howling plot holes towards the end, because of the lovely trick it pulls off in the closing minutes. And that's why I'm not too desperate to find out how much of a true story it really is.

The Belated Birthday Girl - when we first meet Betty Anne Waters (Hilary Swank), she is a mature student in law school: a working-class mother of two, she is clearly not the same as the rest of her classmates. We soon learn that she is there to try to get her brother Kenny out of jail, where he has been since being convicted of a brutal murder in 1983. Never for a moment doubting his innocence, Betty Anne has spent the intervening years trying everything to get Kenny released, and not having the money for lawyers, or finding the lawyers willing to help, she has put herself through college and into law school. Based on a true-life case, Conviction follows Betty Anne, with flashbacks to her and Kenny's early life, and Kenny's arrest and trial, as she fights to find the evidence to free him.

This is very much the sort of stuff shown on cable "true life drama" channels, lifted by higher production values, and especially by a first rate cast. Hilary Swank is terrific as Betty Anne, showing an unwavering faith in her brother, almost oblivious to the personal cost to herself. Sam Rockwell as Kenny and Minnie Driver as Abra Rice, the one other mature student from her class who befriends Betty Anne, also give excellent performances at the head of a very strong supporting cast. The direction and writing are mostly solid, although the script includes the obligatory clunky "eureka" moment where Betty realises just what she needs to find as the crucial exonerating evidence. As an "uplifting" drama, the final outcome is perhaps never in doubt (and being based on true events, would be easy to find out and may be widely known in the US) - although as the focus is on Betty Anne's determination and transformation, it could be almost besides the point - and Conviction is hardly ground-breaking. But the performances make it worth watching and keep you interested throughout.