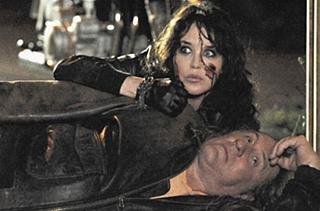 My first ever visit to Ciné Lumière in Kensington was in 2003, to see The Missing Half. Seven years later, I'm back for my second visit. I'm pleased to see that in the interim, they've persuaded the staff to not talk French at you while they're tearing your tickets.

Mammuth is the fourth film from writer/director team Benoît Delépine and Gustave Kervern, and the third of theirs to be shown at the London Film Festival. Aaltra was a road movie in which two men crossed Belgium to confront the manufacturer of the tractor which put them both in wheelchairs. Louise-Michel was the story of a woman who hires an amateur hitman to assassinate the boss that laid her off. You can detect a certain sensibility coming through in Delépine and Kervern's work, and Mammuth is basically more of the same.

We first meet Serge 'Mammuth' Pilardosse (Gerard Depardieu) on his last day at work at a pork processing plant. He's retiring: he should be relaxing and having the time of his life. But his wife Catherine (Yolande Moreau) quickly gets fed up of him mooching around the house all day. Soon, it's no longer a problem, because Mammuth has a project: he needs to track down ten of his former employers to get the paperwork which will allow him to claim his pension. He drags his Munch Mammut motorbike out of the garage, and sets out on a great adventure.

So, we're back in Aaltra road movie territory, only this time shot in super-saturated colour rather than the Scope black and white of the earlier film. And the economic downturn that drove the plot in Louise-Michel is quietly alluded to throughout - Mammuth's journey is a trail scattered with dead businesses and workplaces that have changed completely in the last 30 years. ("You'll have to visit our site for information," says one receptionist. "But I'm at the site!" yells Mammuth.)

The difference this time is the loss of Delépine and Kervern's childish desire to shock audiences. Unfortunately, that was one of the things I used to like most about them. That's not to say that the duo have completely gone mainstream, not when the story they're telling contains at least one unexplained corpse and the most unexpected masturbation scene in modern cinema. But for a large part, this is a gentle tale of one man struggling to keep his dignity in retirement in the face of a world he finds increasingly surreal, and I want to bagsy the alternative title Un Pied Dans La Tombe before anyone else does.

Still, it has to be said, Gerard Depardieu makes for one hell of a Victor Meldrew. His performance is a fearless one, parading his bière gut and lank hair without a shred of self-consciousness. Yolande Moreau does terrific work as his missus (particularly in a very D&K-esque subplot which sadly fizzles out before it reaches their usual levels of wrong), and there are a couple of excellent cameos from Isabelle Adjani and Benoît Poelvoorde. Mammuth is a little bit of a step down from Delépine and Kervern's earlier films, but it replaces their OTT humour with something approaching charm, and that wasn't a word I was ever expecting to use about them. 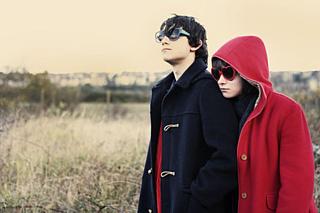 One more disappointment to come out of Mammuth: in the past, D&K's LFF Q&A sessions have become the stuff of legend, as they drunkenly take to the stage and ramble like crazy. Sadly, it would appear that they don't do afternoons. Still, the introduction to Submarine makes for a comparatively civilised alternative. Producer Mark Herbert tells the story of how virtually every person who's ever passed through a Warp Films production in the last decade came to be involved in this one: and then writer/director Richard Ayoade steals the show with a precision-tooled couple of minutes of incoherent babble.

His film, based on the novel by Joe Dunthorne, is a coming-of-age story set in Swansea. Oliver Tate (Craig Roberts) is the son of a marine scientist, who can only get through the boredom of school by imagining how his death would bring the whole of Wales to a standstill. He has his eye set on classmate Jordana (Yasmin Paige), and sets up a complex plan to win her heart, or at least fool her into sleeping with him. But there are more pressing matters to deal with closer to home, as his mum is expressing an unhealthy interest in next-door neighbour Graham (Paddy Considine).

You probably already know Richard Ayoade: the guy who plays Moss in The IT Crowd, and in his spare time directs other TV comedy shows and makes music videos for the likes of Arctic Monkeys and Vampire Weekend. If you think that Vampire Weekend video there makes him look like a bit of a Wes Anderson fan, you should see his debut feature. Bold face chapter headings, even bolder camera moves, digressions into mini films-within-the-film, first person teenage narration with no sense of self-awareness - people have been calling Submarine the Welsh Rushmore, and with good reason.

But for all the precision of Anderson's work, there's rarely a sense of joy in there, except for those times when he gets his cast to start dancing just before the end credits. And I think Submarine has joy bursting out of it, even though its main character spends a large amount of screentime thinking about his own death. Part of that has to be down to Joe Dunthorne's source material, which sympathetically covers one of my favourite topics in coming-of-age literature: the way that every setback you encounter in your teenage years, no matter how minor, feels like the end of the world. (Don't tell me it was just me.)

Nevertheless, it's Ayoade's baby: he may wear his influences on its sleeve, but the film is an utterly charming entertainment in its own right. His script keeps the whole thing bubbling along at a great pace, with a knowing verbal and visual wit throughout. The cast is terrific, with Craig Roberts and Yasmin Paige completely convincing as the odd couple at its centre, and Paddy Considine enjoying himself far too much with his supporting role. As a sheer piece of Friday night fun, it's hard to imagine this being beaten this Festival: it's one of those films where right now I can't come up with anything more coherent that 'just see it, you buggers,' and that's normally a good sign.

Lesley - Why oh why have I picked so much third world conflict zone cinema? Because of this!!! Quite, quite outstanding. Set in contemporary Indian Kashmir, a poignant tale of life under harsh security restrictions. What was so impressive was the fully rounded portrayal of the characters caught up in this situation. At the Q & A after Aamir Bashir, the director spoke of his respect for the people he worked with, and the political sophistication of their understanding, plus of course the difficulties of filming in the area. Highly recommended, but not likely to challenge the shoot em up multiplex offerings.

I Wish I Knew [trailer]

Old Lag - A documentary about the Chinese city of Shanghai, although perhaps as the BFI describes it, an essay.

Essentially it is the stories of a generation of people originating from Shanghai that is about to pass on and which has a unique view. The Chinese revere the older generation more so than we do in the West. It is not surprising therefore that we hear in the film extensively from this group before it is too late. Their unique view is that they experienced Shanghai and its life styles in the pre-communist era, the communist era and the capitalist-communist era. This view encompassed the Shanghai Diaspora in Taiwan and Hong Kong caused by the Communist era and the return to the mainland resulting from economic liberalization.

These talking head stories involve a wide range of topics such as tales of a notorious gangster by his daughter, the war with Japan, commercial life in the 1930s, married life and concubines, the rise of communism and escaping to Hong Kong. The stories are interspersed with film of an awe inspiring great and massive city which seems to be in a permanent and universal state of re-construction.

The film though is too long at 2hrs 18minutes. There are probably too many stories; there is film of nondescript areas of the city being wandered through by the famous actress Zhao Tao, beautiful but not really adding to this documentary. There is a diversion into the Shang-ollywood film production of the 1930s which outside the Chinese and film buff communities will be lost on everyone. The stories from the capitalist communist era by comparison are few and short. By their strangeness though the stories illustrate well the twisting of people and society by the new economic growth. Left feeling the film was a missed rare opportunity to portray the recent history and life of this great Chinese city.

Lesley - Gerard Depardieu challenges Mickey Rourke for most interesting aged long hair retiree. I can picture the French audiences howling with laughter in their seats. We'll show you, USA. I think the tragedy of Depardieu's son Guillaume was shadowing this contribution, but for me, some you win.........................!