Reviewed today: I Wish I Knew, The Light Thief, Mars. 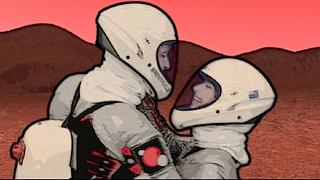 Why did I see this one? The main reason has to be the picture on the left. You can come up with all sorts of reasons as to why a film leaps out of the LFF programme when you first browse through it, but sometimes just a nice image can do it for you. Particularly when it indicates that the film isn't going to look like anything you've ever seen before.

It's the year 2015, and the world's space agencies are in a battle to be the first one to make it to Mars. Europe & Russia have sent up a series of robots, and watched them all vanish: President Kinky Friedman of the USA therefore thinks it's time to get a manned spaceship out there. NASA assembles a crew of three for the mission. Hank Morrison (Paul Gordon) is an ace pilot: Dr Casey Cook (Zoe Simpson) is a top scientist: and Charlie Brownsville (Mark Duplass) is, not to put too fine a point on it, the spare. He's good at dealing with the media during the long journey out there, but at best he's "the getaway driver," the one who'll be stuck in the ship while the other two get to explore Mars. There is, of course, no way that this arrangement could change during the course of the movie.

This is writer/director Geoff Marslett's first feature: his previous work includes an animated video for James Kochalka Superstar's excellent song Monkey Versus Robot (sadly no longer available online, though Nate Pommer's alternative video is still out there). Inevitably, it's the look of Mars that's the initial talking point, a low-budget mashup of green screen, rotoscoping, wonky digital filters and pure animation. Marslett freely admits that the result has some visual resemblance to Waking Life: but where Richard Linklater used the technique to produce a crazy array of differing styles,  here it's used to create a complete coherent environment. "There isn't a single character based on me, there's a universe based on me," he suggests.

But there's more to Mars than just the way it looks. There are plenty of laughs derived from the deadpan-verging-on-stoned attitude of the main characters to the wonders of space. (For some reason, really underplayed voice acting works hilariously with animation: it's something to do with your awareness that the images took a long time to create, and the contrast against the apparently slapdash audio. See The Life And Times Of Tim for another example.) There's some smart satire on how the media coverage of a Mars mission today would end up being a lot more lightweight and frivolous than the way the Moon landings were covered forty years ago. And you can have fun spotting all the hip musos who appear in cameos, including Kinky Friedman, James Kochalka and Howe Gelb (who also provides a lovely soundtrack). No distributor has expressed an interest in Mars yet, but that should change, I hope. 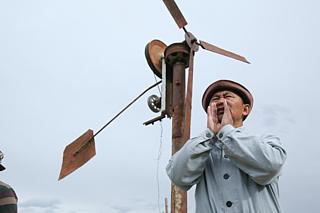 Why did I see this one? Well, this time it's down to bargaining. When the Pals and I make our plans for the LFF, there's always an element of "I'll see this one with you, if you'll see this one with me." So The Light Thief was The Belated Birthday Girl's choice. In exchange for me going to this with her, she had to go to Tabloid with me, which probably says something horrible about me that I don't want to think about too hard right now.

This, I believe, is the first time I've ever seen a film from Kyrgyzstan, which I've only really known in the past as being the best country in the atlas that you can use in a game of Scrabble. If nothing else, it's certainly the best hatted film in this year's LFF, thanks to the traditional kalpaks worn by most of the male characters, and even by a couple of Kyrgyz men in tonight's audience. (I thought you might like to see that my first attempt at Googling 'Kyrgyzstan hats' wasn't quite so successful.)

Mr Light (Aktan Arym Kubat) is the local electrician in a small Kyrgyz village. He's well-liked by the people in the town, mainly because he's good at nobbling their electric meters to save them money: a sideline that nearly gets him into serious trouble with the authorities, until the Tulip Revolution of 2005 saves his bacon. As is usually the case in these situations, the resulting power vacuum brings all sorts of dodgy characters into the village, and Mr Light needs to decide if he's on their side or not. He has a dream to bring cheap power to the town, and they could help - if he can trust them.

The Light Thief is a curious little film: in its short 80 minutes it mixes up poetic imagery, broad comedy, sentimental drama, and a bit of political satire that probably means more to a local audience. (I had to look up the details of the revolution afterwards to work out what was going on.) At its heart is writer/director/star Aktan Arym Kubat, who just about holds the whole thing together with his quiet charisma. He reminds me a little of Takeshi Kitano in the way he's frequently happy to just be a still centre around which many scenes revolve, but without the promise/threat of the occasional explosion of emotion that Takeshi would give you. The film he holds together is a patchy old thing, but those patches are enjoyable enough to watch. 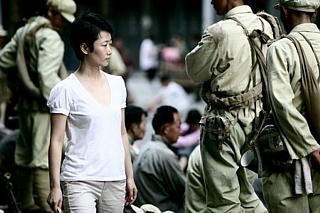 Why did I see this one? Well, I've always been fascinated by Shanghai as a city, and Jia Zhangke's film is a documentary about its last 80 years or so. I've been there twice, in 1993 and 2009, and it was completely different each time: it's obviously one of those cities that's in a permanent state of flux. (It turns out that Jia was actually filming there in 2009, but I'm afraid you can't see us wandering around in the background of any of his shots.)

I Wish I Knew is an oral history of Shanghai from the mid-30s Chiang Kai-shek era to the present day, told in the words of people who are still alive today to tell the tales. Some of them suffered badly in the Cultural Revolution: some of them had it so tough they moved away, to Taiwan and Hong Kong: some of them stayed and prospered. And several of them were in the movies, so there's a parallel set of interviews where actors and directors talk about their work in the great Shanghai films, from 1948's Spring In A Small Town to 1998's Flowers Of Shanghai.

It's a little rambly (running for two hours 20), but there's plenty to keep your interest. Jia shoots the interviews imaginatively, and uses the Shanghai locations well - the iconic Bund skyline features a lot, as you'd expect, but we see plenty of the city outside of the usual tourist sites. The only real throughline is the chronological passage of time, but small clumps of interviews based around key historical events give the film a solid structure. The stories told by the interviewees are funny, moving and entertaining by turns.

There's a half-hearted attempt at trying to convert a set of disjointed interviews into a single unit with a linking device: a series of shots of actress Zhao Tao wandering round Shanghai looking wistful. These sort of work on a poetic level, and it's a shame that Jia felt he had to top them with a final scene that attempts to impose some sort of sentimental narrative. The film doesn't really need it: the witnesses and the city stand up by themselves. That quibble aside, that makes it yet another fine documentary I've seen at this year's Festival. Any more?