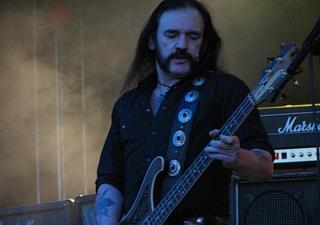 '#LFF audiences! The alphanumeric code on your ticket indicates the seat you should be sitting in. IT'S NOT THAT FUCKING DIFFICULT.'
posted on Twitter by SpankTM at 12.11pm

12.15pm on a Monday? It's not a particularly rock and roll timeslot, is it? You'd hardly expect the subject of Greg Olliver and Wes Orshoski's documentary to be out of bed by that time, I'm sure. Ian 'Lemmy' Kilmister lives in LA these days, in a poky little apartment crammed with war memorabilia. When he's not propping up the trivia machine at the nearby Rainbow Bar And Grill, he's out on tour with Motorhead, as he has been for the last three and a half decades.

It's hard to know what to make of this documentary: it's the sort of film people would make about an artist who was already dead. Fellow musicians line up to testify to his influence: this is the second documentary this Festival where I've heard Mick Jones talk about the bands he used to see live when he was a kid (in this case, Lemmy's preceding stint in Hawkwind). People who've played with him tell their stories, revealing how badly a band like Hawkwind copes when different members are on incompatible drugs. Others try to describe his appeal: I like Jarvis Cocker's suggestion that he's the audio equivalent of a sandstorm hitting you in the face.

But Lemmy's still here, and a large part of this film is about following him through his life of touring the world and chilling in LA. There's not much historical context in there: we hear a little about him growing up in an all-female household, early experiences that kept him well away from heroin and its users, and his days in The Rockin' Vickers, Hawkwind and Motorhead. We also get to meet his son, or at least the one he still wants to talk about. But he seems to have come to peace with the idea of choosing rock 'n' roll life over romance and domesticity. "Making love lasts half an hour tops, but a rock show can go on over 90 minutes. So that's that one sorted out."

All this is all well and good, and Lemmy seems like an utterly charming bloke under the rock god trappings: but the film doesn't really have any point to it, other than that Lemmy is an utterly charming bloke. Nobody has a bad word to say about him (the directors say they couldn't find anyone that would), and there are a couple of scenes that seem designed specifically to address the iffier bits of his personality (mainly the speed abuse and the love of Nazi imagery). The result is the movie equivalent of one of those cash-in picture-heavy books that's published about a pop star within a month of their first hit. Which is fine as far as it goes, but a character as fascinating and contradictory as Lemmy deserves something more than this attempt to file some of the rough edges off him. 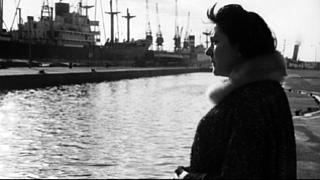 In what seems from a distance like some sort of act of cosmic re-ordering, last night's visit to the Greenwich Picturehouse in Sarf Landan is now being balanced out by tonight's visit to the East Finchley Phoenix in the North. And this time, it really is part of the Festival - in fact, it's the gala of the Film In The City strand, where the LFF is taken out of the centre of the capital and into the suburbs. In the absence of the usual collection of archive material shown for free in Trafalgar Square (and what happened to that this year, anyway?), we have three post-war documentary shorts, intended as a lead-in into a major BFI restoration project called Boom Britain.

The first short is Festival from 1951, in which Derek York tries to find an interesting way of presenting the Festival of Britain which took place that year. He ends up with a narrative about a poor kid who picks up a complimentary ticket for the event, and spends the day blagging food and entry to sideshows in a variety of morally dubious ways. It's nice to see the way the South Bank was transformed in 1951, but the social context is possibly more interesting these days, all the way down to the kid blithely picking up a lift home from a passing stranger.

Festival is fairly blatant about the manipulation of its images, to the extent of structuring itself around a fictional character. Bow Bells takes a more impressionistic view of its 1954 East End scenery, using a collection of old music-hall songs to tie its various vignettes together: Daddy Wouldn't Buy Me A Bow-Wow accompanying shots of kids with their pets, and so on. It's got a more poetic sensibility than the earlier film: whereas Festival was presumably made to a brief to showcase the event, Anthony Simmons has produced something closer to a pure art film.

Finally, Portrait Of Queenie narrows its focus to Poplar, and one pub in particular: the Iron Bridge Tavern, run by singer Queenie Watts and her trumpet-playing husbad, Slim. Michael Orrom's film takes the form of a night in the pub, mixing conversations with the clientele and live music from various turns, interspersed with Queenie and Slim walking and talking through their neighbourhood. (Queenie pulls these scenes off a lot more convincingly than her old man, it has to be said.)

Portrait of Queenie is the longest of the three films at 45 minutes, and easily the best. Some of the framing material seems a little stilted (two girls ordering sweet Martinis all night get bigger and bigger laughs from the audience with each round), but the music at its core is glorious. Queenie's got a great blues voice (around the same time, she showed it off in a cameo in Sparrows Can't Sing), and one hell of a band to back her up. At the same time, the film shows how music was in a state of transition back in 1964: there's a traditional East End knees-up going on in the snug at the same time, and pretty boys with guitars waiting to take over the main room. The film's crammed with period and sociological detail that makes you eager to find out more, like just how a black musician like Mike McKenzie went down in an early 60's East End boozer when the cameras weren't rolling.

As an added bonus for this gala screening, we get two special guests for a Q&A: Anthony Simmons (director of Bow Bells) and James Stevens (musical director of Portrait For Queenie). They're both getting on a bit now, and Stevens can't even make it up the steps to the stage. So it comes as an entertaining shock when Simmons has to look on dumbly while Stevens totally takes over the show: plugging his recordings (complete with catalogue numbers), and blaming his lack of success on a conspiracy between the movie industry, the music industry and the BBC. "Have you heard who's Composer Of The Week this week? Steve Reich. What a load of shit." Sometimes these post-screening discussions can get a little too polite, and it's fun once in a while when they're not.

Suzanne Vega Fanclub - It's quite amazing to think that documentaries were a relative rarity at the LFF before Bowling for Columbine, whereas nowadays you are literally tripping over them. Anyway this was an interesting piece, about how a community in Ireland, Rossport, have come together to try and fight Shell's plan to run a gas pipeline through their land. A dispute that has been ongoing for the last 8 or 9 years.

Now the arguments against the pipeline are fairly compelling: environmental damage to the land, loss of natural habitat, loss of access to the land for locals, plus destruction/contamination of fishing waters. However one of the more compelling reasons against it, is that the locals don't want what is an experimental pipeline, carrying raw untreated gas past their houses, lest the bloody thing blows up.

So a new concept in this whole dispute is discovered known as 'Shell's Law'. Thus the Irish government of Bertie Ahern, with a combination of compulsory purchase and the forces of the Garda, seem determined to override all European environmental legislation and civil liberties to get this pipeline laid. Thus we even get five local residents being given indefinite prison sentences, which in the event went to three months in maximum security, for trespassing on Shell's land. For their part Shell's employees seem able to ignore court orders at will, such as not to carry out land surveys, or lay pipes across fishing habitats. As for their Garda, their function seems to be not to protect the community from outsiders, but the other way round.

Naturally Shell are old hands at this sort of game, and are good at dividing communties. So we have some of the community wanting a fight to the finish with Shell, whilst others are looking to make an accommodation by suggesting an alternative route for the pipe. Shell for their part do their best to suggest an even more environmentally damaging alternative pipe route than the original. Meanwhile some of the fishermen, most notably 'The Chief', are prepared to take the fight to right under the pipe laying ship itself, whilst other fishermen are happy to take 20,000 euros from Shell to go along.

This is an important film for all of us, and features some highly entertaining as well as strongly principled locals in it. The one criticism I would make is that it stops at a moment in 2009, where Shell's pipe laying vessel is calling off work for the winter to effect repairs. This is treated as a victory by the locals, when of course it can only be a postponement. Thus with the credits rolling we get a quickfire caption fest saying: Shell are back, no they're not, yes they are, no they're not. All of this leaving one wondering has this finally been resolved against Shell or is this still ongoing. So perhaps this is one documentary that still needs a little more filming before it and this story is complete.

Thankfully this film started on time, but it still only left 20 minutes to get from NFT2 to Vue7. Did I make it ? The answer will come tomorrow..........

Lesley - A fab film, which could so easily gone wrong, what with simple farmers in rural Ireland, horny adolescents etc. But this is a tale told by a master storyteller, Tom Hall (nice Q & A at the end), deftly handled by a strong cast. As the lead Domhnall Gleeson is beyond belief, talk about nailing a character. A wonderful fluid performance, chameleon like in evoking both winsome attractiveness and ferret featured ferality (which the director was a bit naughty about in the Q & A, given that Domhnall wasn't there).  I'm sure these remarks will be like water off a duck's back, as he is so, so good. A must see when it gets a release, which it surely will.