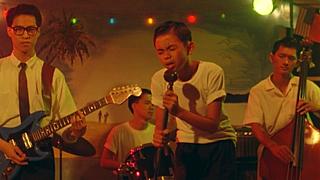 ...at the very least, it suggests that film preservation is in a bad way. Because A Brighter Summer Day was made less than two decades ago, and was even shown at the 1991 LFF. Back then it was three hours long, and rumours abounded that a more complete four hour cut was doing the rounds in certain Asian territories. On at least one occasion, a screening of the four-hour version was announced in London and then cruelly cancelled at the last minute.

I reviewed that version in 2007, shortly after the death of director Edward Yang: I'd picked up a tatty VCD of the film in Hong Kong in 2001, but hadn't got around to watching it till then. As I mention in the piece, it's a film that The Belated Birthday Girl and I are very fond of for a number of reasons. I said back then that it needed a restoration and re-release as a matter of urgency, and now we finally have one, courtesy of Martin Scorsese's World Cinema Foundation. It's terrifying to hear just how difficult a job it was to restore a film made in 1991: large chunks of the original negatives have been lost, and had to be replaced with second-generation materials.

Even now, the opening scene looks rather ropey: unless that's a cunning ruse by the WCF to show us how much work they've done, of course. Once we're past the prologue, the scratches and fuzziness vanish almost completely. The rest of the film has a rather soft image quality, but somehow that seems in keeping with the early 1960s period it's trying to evoke. It certainly looks a lot better than my VCD, which was pixellated to buggery and largely obscured by etched-in English and Chinese subtitles that took up half the screen. (On a side note, why do people still persist with laser-etched subtitles in this day and age? They're still using them on this print. We've had at least one film this year - Oki's Movie - where using the old technology rather than digital methods has made some scenes almost incomprehensible, what with the appearance of white subtitles against a white background.)

As for the film itself: well, my 2007 review still stands. After several viewings, the story of Chinese teenager Xiao Si'r (Zhang Zhen) growing up in 1960s Taipei hasn't lost any of its power. The setting may be unfamiliar, but Xiao Si'r's obsessions - girls, gang fights, rock 'n' roll - are universal. Yang structures his story beautifully over the four hours, juggling a large cast of similarly-uniformed kids (sometimes only distinguishable by their amusing nicknames) and keeping us interested in all of them. And thanks to this restored print, this time I've got a greater appreciation of his visual style: the long takes, the subtly repeated visual motifs, the unsettling devices used during the subplot concerning Si'r's dad and his encounter with the secret police. It's a shame there won't be any new Edward Yang films to look forward to, but finally his masterpiece is getting the treatment it deserves. 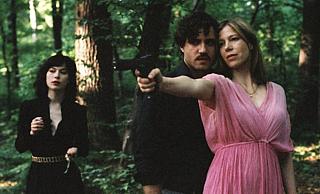 You know on most other occasions, if I saw a 237 minute film, that would end up being the longest movie I'd seen that day. But not today.

The last Sunday of the LFF is Surprise Film Day: and, as ever, tickets for it are as rare as rocking-horse shit. In the last couple of years, we've been lucky and managed to hit the box office at the precise time the day before when press tickets have been released to the public. Not this year, though: so we had to decide if we were going to take our chances in the returns queue on the night, or see something else instead. We reluctantly went for the latter option.

The rest of the LFF programme for Sunday night looked a bit weak, unfortunately, so we looked around to see if there was anything on general release that could fit the bill instead. And that's when our appalling plan came together: a one-off chance to see a film that was actually in this year's Festival (it had a single screening at the Vue last Saturday), in a venue that's being used in this year's LFF (the Greenwich Picturehouse showed a couple of Festival films last Monday), but just not, you know, actually part of the LFF itself. Plus, it gave us the chance to construct a timetable for the day that looked like this:

I think you can see the attraction. (For the record, the Surprise Film we missed turned out to be Rowan Joffe's new remake of Brighton Rock [clip]. By all accounts, it's a bit crap. We win.)

Oliver Assayas' biopic of one of the world's most notorious terrorists comes in two forms. There's a two-and-three-quarter hour edit that opened in UK cinemas last Friday, and may well be playing at an arthouse near you as I write this. But that version is cut down from a three-part, 335 minute miniseries made for French TV: and several cinemas are running one-day-only engagements of what I'm choosing to call Big Carlos, as the Picturehouse is doing here. (And in those 335 minutes, the word 'Jackal' is never used once.)

I'm not sure what Assayas has removed to get this down to under three hours. As it stands, the three-part structure actually suits the arc of Carlos (Edgar Ramirez) perfectly. In part one, we see Carlos' shaky beginnings as a terrorist for hire, working under the supervision of Wadie Haddad (Ahmad Kaabour) to destabilise international capitalism. In part two, we concentrate on the act that gave him global notoriety, the 1975 attack on an OPEC conference in Vienna. Part three is the dying fall, as he throws in his lot with the Syrians only to find that history is changing too fast for him to keep up.

There's a lot of ground covered here, and the screenplay by Assayas and Dan Franck does an admirable job of mashing up complex geopolitics into a nicely digestible form. There's a risk, of course, that the focus on Carlos and his spectacular plans will make terrorism look glamorous, but I think Assayas avoids that. The action is filmed in an edgy modern style, with frequent use of jumpcuts even in the full version to remove any dull frames in the middle of a shot. But he's careful to point out that a lot of the operations Carlos supervised failed to go to plan, despite his reputation, and gets some brilliant moments of black comedy from that. (Somehow the schadenfreude that comes out of failed terrorist attacks is the funniest of all. Chris Morris knew exactly what he was doing.)

Edgar Martinez's powerhouse performance is at the centre of the whole affair, to the extent that the energy level of Carlos drops perceptibly during the few scenes when he's not on screen. With his weight rising and falling like Jake la Motta on fast forward, and his confident handling of dialogue in a huge number of languages, you suspect that the film wouldn't work as well with anyone else in the lead. His performance is very reminiscent of Vincent Cassel in last year's Mesrine movies, and Carlos follows a similar narrative arc to that diptych: in both cases, the protagonist falls apart once they start to believe their own myth.

Carlos the movie is every bit as good as it thinks it is, unlike Carlos the man. I'd imagine he could still beat the snot out of Pinkie in Brighton Rock, though.