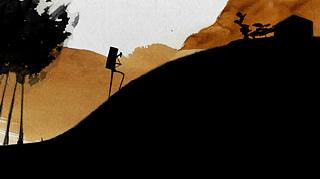 I'm 15 seconds into my first screening of LFF 2010 and I'm already confused. That can't be a good start, can it? The thing is, I was expecting the show to start with that trailer I pointed you at yesterday, the one that's highlighted on the front of the LFF site. But they started with an entirely different one - a brief timelapse film showing the construction of this year's programme image. So what's that other film, then? A promo to advertise the Festival? And if that's the case, shouldn't it have the Festival URL in there somewhere?

Anyway, enough of that for now. Let's focus on how, for the first time I can recall in 22 of these things, my first slot of the year is taken up with one of Jayne Pilling's fine roundups of the year's animated shorts. I always enjoy these collections as a useful snapshot of the state of the medium in any given year. This year is notable for being one that can support two separate animation showcases: but the average length of the individual films appears to be increasing, with only six shorts in each 70 minute programme.

Of the six directors involved, only Magali Charrier is present this afternoon, and I'd imagine it'd be a disappointment to her that 12 Sketches On The Impossibility Of Being Still [clip] gets the most subdued reaction of the lot. Mind you, this sort of hybrid abstract film - an awkward mishmash of dance, animation, image distortion and aggressive editing - never really goes down well at these events, as audiences get all restless waiting to see some 'proper' animation. They get it in the early highlight of Jose Miguel Ribeiro's Journey To Cape Verde [trailer], a vibrantly shot and illustrated journal of a walking holiday, with fine use of sound design getting across his reaction to the alien feel of the place.

We don't get a separate British Animation programme this year - there are just two representatives from the home country across both programmes. 12 Sketches is one of them, and Alois Di Leo's more successful The Boy Who Wanted To Be A Lion [official site] is the other. Again distinguished by excellent sound design (arising from the eponymous Boy's hearing disorder), it quietly but surely maps a journey into obsession. Hearty boos are in order to those audience members who found the final twist of the plot funny - it's unexpected, sure, but it's chillingly predictable at the same time.

The next two shorts are perfectly fine without being outstanding. Marie-Helene Turcotte's The Formation Of Clouds [official site] is a very pretty depiction of childhood, using changes in background texture and half-glimpsed imagery to produce a dreamily unsettling atmosphere. Shaun Tan and Andrew Ruhemann's The Lost Thing [official site] is precisely the opposite of dreamy with its gaudily realised CGI creature, but it does a good job of creating a surreal world where that creature is just an irritating problem to be solved rather than anything more threatening. (Tim Minchin's distracted narration helps a lot on that score.)

But it's the final film of the six - Shinsaku Hidaka's Love Mouse [part 1, part 2, part 3] - which wins the day for its sheer berserk originality. It takes what's already a barmy premise - a mouse falls in love with a piece of cheese, and a renegade animal assists their romance - and then ramps up the crazy by taking what was presumably Japanese dialogue, and using a computer to both translate it into English and read it out. The deadpan line readings that emerge teeter hilariously on the verge of sense, but somehow manage to make the wild emotions of the story more believable. It's a delightful piece of work unlike anything I've ever seen or heard before, and I hope there's more like it soon. I should point out that I was laughing at this one harder than anyone else in the room, though. 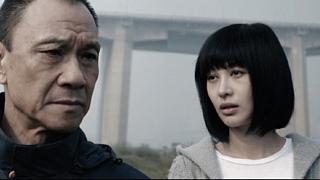 As Suze noted in comments yesterday, a lot of films are selling out in advance this year. But it doesn't mean that you've missed out if you're coming to the Festival late. Additional tickets are always released in the days leading up to the screening, as well as on the day itself. Both of my screenings today, for example, were marked as being sold out as recently as Wednesday afternoon. I felt really pleased with myself when I grabbed the single seat for Chongqing Blues that became available late Wednesday night: less so when it was joined by another dozen or so spares the following morning, most of which were still empty by the time the film started.

Chongqing Blues is the story of Lin Quanhai (Wang Xueqi), a sailor who's become estranged from his wife and son. He's come home after several years away at sea to discover that his son Bo is dead, shot by the police during a siege. Lin takes it upon himself to investigate, but finds that both his ex-wife and his son's friends are reluctant to tell him the truth about how Bo got into this mess.

This is the work of Chinese writer/director Wang Xiaoshuai, who made a big splash at the 1997 LFF with his film Frozen, which enraged the authorities so much he had to release it under a pseudonym. He's had international success on a number of occasions since, most notably with Beijing Bicycle in 2001. It's a common complaint of mine that the bulk of the Chinese cinema that gets released in the West consists of pretty period pieces and costume dramas, with very little evidence that filmmakers are talking about the problems people face in China today: and I've always admired Wang as a director who can talk about those problems in film language that translates internationally.

Having said all that, Chongqing Blues is a little bit of a disappointment, possibly because it feels less of a Chinese film than the ones I've seen before. Its theme of the breakdown of family life, and the problems that leads to in society as a whole, is one that could apply anywhere in the world. The only variation this film gives us is setting the debate in that peculiarly Chinese style of argument where two people take opposing sides and Will. Not. Budge. Ever. It's well-acted and shot, but once you've worked out the story that the investigation plot is trying to distract you from, it rambles an awful lot on its way to the end. It may well be a story that needs to be told to a Chinese audience, but there's less interest in it for an international audience than there was in Wang's previous work.