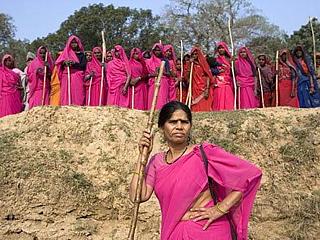 Today's going to be a day of directors I primarily associate with the LFF - in all three cases, it was a Festival screening which introduced me to them, and I've seen several of their films here since. The LFF programmers all have their favourites, and I'm happy to agree with them here.

Kim Longinotto was The Belated Birthday Girl's discovery, if you could call it that - Longinotto has been making documentary films for decades now, but it wasn't until The BBG came back raving after Sisters In Law that I started paying attention. We've seen quite a few of her films since. If there's a common link, it's that all of her films focus on women at work, frequently in the sort of occupations that most people would shy away from. (Hold Me Tight Let Me Go is the most recent example covered in these pages.)

Here, her subject is Sampat Pal, self-styled commander-in-chief of The Pink Gang, a brightly-attired organisation dedicated to the rights of lower-caste women in Uttar Pradesh, North India. To be honest, Pal isn't so much C-in-C as the whole operation on her own: she uses her personal charisma and enormous yelling voice to beat men into submission. And it always is men who are the problem: boys who get girls into trouble and then run off, guys who get married and then dump the wife on a sexually predatory father-in-law, families who cast out their daughters for daring to cross the caste barrier.

As always with Longinotto, her camera appears to completely vanish into the background, and a clear narrative path gives us full access to around half a dozen of Pal's cases. It's fascinating to watch her at work: she realises her main job isn't just to solve individual problems, but to get them out in the open for wider discussion. So whenever she arbitrates on a family problem, she does it outdoors, ensuring that a crowd of onlookers is there to witness what's happening.

Longinotto tried to warn us at the start of this screening that we might feel ambivalent about Pal's work by the end, but I don't really get that. Sure, she isn't the 'messiah for women' she claims to be: towards the end, she's forced to make compromises when the family problems get a little too close to home. But she's doing what needs to be done, and doing it in the loudest possible voice to prevent it from happening again. At the very least, she's a force of nature: and compared against every other Indian woman in Pink Saris, she's utterly one of a kind. A perfect subject for a Kim Longinotto film, then. 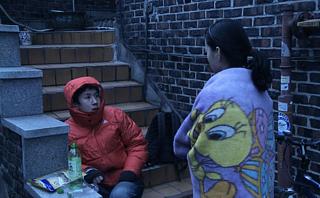 Kim Longinotto's films are relatively easy to see in the UK - most of them either get a theatrical or DVD release, or turn up on telly. (Pink Saris, for example, was made for Channel 4.) Korean director Hong Sangsoo isn't as lucky: the London Film Festival is more or less the only way you'll get to see his work. Unless you were at BFI Southbank last September, where they held a useful retrospective of his movies. I unfortunately missed most of that, with the exception of a screening of Hahaha, one of the two films he's released in 2010. This is the other one.

On paper, it's a very simple story. It follows three people at a film school - Professor Song (Moon Sungkeun), and his students Jingu (Lee Sunkyun) and Oki (Jung Yumi). Over the space of a few years, Oki dates each of the men in turn. It would seem like the simplest story in the world. But that's because you're not Hong Sangsoo.

Hong takes this straightforward arrangement, and shoves it through a blender. The narrative is just fractured enough to give you hours of fun reassembling it in your head afterwards, but not so fractured as to scare you off completely while you're watching it. He mixes in some of the motifs I've come to recognise from his earlier films - parallel mirrored narratives, unexpected jumps in time, confusing the act of making a film with the act of being in a film.

Plus, in another Hong motif, there's lots and lots of drinking, mainly on the part of Jingu. This is the source of much bigger laughs than, say, last year's Like You Know It All, where the lead character's drunken indiscretions were quietly hidden in the gaps between scenes. Here, their full embarrassing potential is on display to the viewer, most notably in a toe-curling Q&A session that Jingu takes while pissed.

Oki's Movie is one of those films where you'll just have to go along with the ride and see where it takes you. Some viewers will get annoyed at its deliberate attempts to wrongfoot you, especially in the way some juicy loose ends are still left dangling at the end. But Hong's movies are all part of his own unique universe, and it's fun to visit there once a year or so. Not sure I could live there, though. Couldn't take the hangovers. 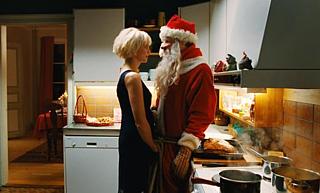 And so on to Bent Hamer from Norway, who I discovered when his second feature Kitchen Stories played at the LFF in 2003. Come to think of it, I've not seen his films at the LFF since, mainly because he's been fortunate enough to get regular UK distribution for English language movies like Factotum or Norwegian product like O'Horten. Hopefully, Home For Christmas will get a similar deal soon, though distributors should note that it really needs to be in cinemas in the next 2 months or so.

Here, Hamer's adapted a short story collection by Levi Henriksen, skilfully weaving six or seven Christmas Eve tales into a single narrative. A wino accidentally bumps into an old friend. Muslim and Jewish kids find alternative ways to celebrate the holiday. Marital problems abound: one couple is breaking up too fast, another is breaking up too slow. And it wouldn't be a proper Christmas without an unexpected birth, would it?

Hamer insists that these aren't necessarily Christmas stories, just human stories that are intensified by taking place over Christmas. And as Hamer's style is slightly downbeat, surreal comedy, what we get is a more melancholy and more hilarious version of that. It's pitched almost perfectly, the stories slowly unfolding a little at a time to draw us in, the balance between sadness and humour maintained throughout. Even what could have been the most sentimental story (the Christmas Eve birth) is given an interesting core of grit by Hamer's rewrite. The result is as warm, charming and pleasantly sad as a Christmas should be - or at least a Scandinavian one.

Just a side note to finish for the day. In 2007, the LFF had two entirely different films - one called Substitute, the other called The Substitute - showing on consecutive days. This year, as well as Home For Christmas, there's also a film called Home By Christmas in the programme. If anyone from the BFI is reading, do you do this on purpose or what?

Old Lag - A modern day, French Canadian, young people’s love triangle. But shallow, shallow and shallow, in behaviour, thought and speech. Maybe though when you fancy someone there is not a lot to be said. You just do.

Gay Francis (writer/director Xavier Dolan himself) and his best friend Marie (Monia Chokri) both fall for Nicolas (Niels Schneider). The film is inter-cut with talks about sexual behaviour by real people including dating, falling in love and the sexual gradient between straight and gay. Nicolas himself is attracted to both Francis and Marie as ‘friends’ but is not saying where he really stands. The result is a slight and shallow dance of attraction, hardly one of high emotions, rather high cool. The tension is caused by the lack of communication between all three. I will leave the result of this bit of fluff for you to find out.

Xavier Dolan covers a lot of the production of this film. He is credited with Directing, Writing, Lead Acting, Editing, Art Direction and Costume Design (loved Marie’s gowns, but Francis does bitch in the film that some vintage styles should not be revived). But maybe you have to do all that when the estimated budget is Canadian $600,000. Dialogue in French and distributed also in France.

Films by Kim Longinotto as video on demand streams

groove68> shouldn't there be a link in there somewhere?

(I suspect it won't work outside of the US, though.)