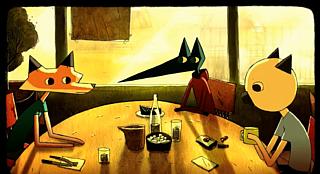 We're in one of those years where the state of world animation is considered strong enough to support not one, but two separate LFF programmes. I started off LFF 2010 with the first one, and now here comes the second: but animation programmer Jayne Pilling hasn't made it along to either of them. Doesn't she do afternoons, or something? No matter: whether she's present or not, it's another fine collection, possibly even better than the first one. It was an absolute sod tracking down sites and video clips for this set of six, so please be sure to follow the links.

We start off with Anna Shepilova's The One Who Was Different [film]: we haven't had many fairy tales in this year's programmes, and this graduation film has to count as one. The story of an abandoned child with a mysterious past and her love affair with a roofbound fiddler, its black and white woodcut style makes it very pretty to look at. It's followed up by Atsushi Wada's In A Pig's Eye [director's site], which we've actually seen before: it was one of the shorts we caught in Tokyo last May at the Image Forum Festival (although I didn't review it at the time). It still doesn't actually make any sense second time round, but the surreal situations that come out of a family being trapped in their house by a giant pig provide plenty of random giggles.

If the programme could be said to have any weaker bits, they probably came with those first two films: it's all pretty solid from here. Michaela Muller's Miramare [official site] is a vibrantly painted story of a family holiday, although the programme note suggests at a political subtext that completely passed me by at the time. It's drawn in huge swirls of paint on glass, so bold they almost verge on the incomprehensible, but they never quite degenerate into pure stylisation. That's certainly not the case with Theodore Ushev's Lipsett Diaries [official site], which is the one film out of this year's twelve that really attacks the audience with sound and visuals. For someone like me who isn't that familiar with Canadian animators, it's a film with two surprises. Firstly, there's the discovery halfway through that it's based on the diaries of real-life avant-garde filmmaker Arthur Lipsett (whose Very Nice, Very Nice was greatly admired by no less an authority than Stanley Kubrick): then there's the disclaimer at the end that Lipsett didn't leave any diaries, so Ushev had to make them up. Still, it appears that Lipsett had a somewhat tormented life, and Diaries is an impressive attempt at getting inside his head.

Pedro Serrazina is the only one of the animators who's made it out of bed for this afternoon screening, and for my money The Eyes Of The Lighthouse [trailer] is the highlight of this collection. It tells the story of the fractious relationship between a father and daughter living in a lighthouse, using a clever mix of styles - a cartoony look for the characters, and photorealistic rendering for the sea - but harnessing them to some first-class visual storytelling. Finally, there's more family trauma in Adrien Merigeau's Old Fangs [film], which plays off the visual cliches of the Funny Animal Cartoon against the bleak story of a father/son reunion. All in all, a pretty great collection of films, but I'd be curious to hear from Pilling why nearly all the animations in this year's programmes are in the ten-minutes-and-over range - weren't there any really short ones of interest this year? 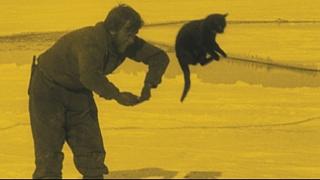 Finally, I get to go to a Gala this year. I had some interest in the Closing Gala, Danny Boyle's 127 Hours: but at thirty quid a pop, I actually found myself relieved when it turned out my ticket application had been unsuccessful. This one sold out almost as quickly, but I managed to pick up a pair of seats when a few were released to the public last Saturday. You don't get much for your twenty pound ticket, though: a bottle of water, a small bar of Green & Black's chocolate, and a one-sheet programme. We didn't get any guests from the film, but that's not really surprising - because this is the Archive Gala, a presentation of a 1924 film that's notorious for none of the cast surviving the production, never mind beyond that. Though I liked The Belated Birthday Girl's suggestion that Captain Oates might suddenly appear on the red carpet saying "well, I'm back."

The Great White Silence is the official record of Captain Robert Scott's doomed 1910 expedition to be the first man on the South Pole. Filmmaker Herbert Ponting accompanied Scott and his party as far as he could - from their departure by boat from New Zealand, across the icy wastelands, and up to the point when the Polar Party set out on their final assault. The resulting footage appeared in a variety of forms: clips within newsreels, illustrating lectures, and at least two feature films like this one.

Along the way, Ponting does something I wasn't expecting - he more or less invents the nature documentary. He's got a fondness for filming animals, starting with the ones that accompanied Scott on his voyage: the ponies and dogs used for transport, and a lively black ship's cat with a rather unfortunate name. And once he discovers the seals, whales and penguins of the polar region, he goes completely over the top, anthropomorphising them like crazy in his copious intertitles. People may have complained about March Of The Penguins and its pushing of a right-wing Christian viewpoint, but I don't believe Morgan Freeman ever attempted to marry off penguins like Ponting does here.

This BFI presentation - a premiere prior to a theatrical and DVD release in 2011 - is something pretty special. For an 86 year old film, it looks stunningly good, with beautifully cleaned-up images and bold use of coloured tints which change from shot to shot. The trailer I've linked to here gives you a hint of the quality of the restoration, and co-sponsors Discovery Channel have a short making-of documentary if you want to find out more. But the other attraction at this gala screening is the live score by Simon Fisher Turner for electronics, strings and vocals.

It's lovely when Neil Brand provides his traditional piano accompaniment at BFI silent screenings: however, Ponting's images are so utterly alien that you can see why a different approach would appeal. Turner has produced something that's more of an impressionistic soundscape than a traditional score, a piece in several movements which gently fade into each other. We get eerie electronic percussion during the shots of Scott's team crossing the ice, a charming Terry Rileyesque looping figure for the long sequence of fun with the penguins, and a surprising amount of silence - at one stage, even using the sound of the room tone in Scott's cabin.

Some of the music jars a little with the images, particularly in the early stages. But the last half hour has a power all of its own, regardless of what you do to it: and the brave decision Turner takes for the accompaniment to the last part of Scott's journey makes it astonishingly moving. Scott's fate may have become a corny cliche of British fortitude - and as The BBG pointed out, it's the sort of British fortitude that comes out of coming second - but I still had something in my eye at the end. Not bad for an 86 year old.

Old Lag - The average man or woman in the street might describe Mike Leigh’s films as dull, bleak, slow and musty. So found it very interesting that in the after film Q&A session Mike Leigh reminded everyone that he is in showbiz, and that if a film is not entertaining then there is no point in making it. Quite a surprising statement. Perhaps not. He obviously knows his business and an audience, as this is his 13th film and it had a budget of £10M. Quite a body of work.

The centre of the film is a deeply happily married late middle aged couple surrounded by a cast of single friends who are in the reverse rather unhappy. Between them are the strikingly common problems any middle aged person male or female will recognise. Men gone to seed with weight, smoking, drinking and gluttony problems. All that was needed for a doctor to rush on with the common high blood pressure treatments. Women who have lost their looks and feel the pain of men’s interest in younger women. The lust for toy boys and the competition from younger women. The problems of being single when life is passing you by. Alcohol problems including the drunk’s inherent self pity compounding the unhappiness of singledom.

Just a few ideas from a dramatic soup of many ideas. An age group not often covered in detail by conventional cinema. Very thought provoking without a lack of affection or humour. A superbly acted and utterly believable slice of real life done in a way that only Mike Leigh and his repertory company of actors can do.

This was a gala performance but anybody of note was well sealed off from the public. The only highly visible person, other than Mike Leigh himself and the stage-assembled actors, was Boris Johnson (this Centrepiece Gala was presented by him). He received a warm welcome and lavished praise on London’s creative community, who reciprocated with their applause.