Do The Funky Gibbon 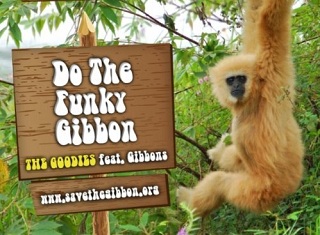 March 2010: I Put A Spell On You, by Shane MacGowan And Friends, released in aid of the survivors of the Haiti earthquake. Highest chart position: unknown, but outside the top 100.

Let's be honest: when it comes to joining in on campaigns to get charity singles to number one, this site has a shit track record. Nevertheless, shall we give it one more try before the end of the year? Because, you know, gibbons.

I've just checked in one of those boxes where I keep my old seven inch singles, and it's still there: the original version of The Funky Gibbon by The Goodies, released by Bradleys Records in 1975. (Featuring Sick Man Blues on the b-side.) It's the one time in their recording career where Bill Oddie's love of vintage funk meshed perfectly with the team's love of utter silliness. Even as a kid in '75, I can remember being taken aback by just how tight the backing track was, particularly when you heard it loud on record rather than squished through the tiny speaker of your telly.

35 years later, the song's been remixed and re-released, and this time it's in aid of the gibbons themselves. savethegibbon.org tells the full story: while the great apes like gorillas and orangutans have been getting all the press, funding and protection, gibbons have been missing out. Of the 16 species of gibbon on the planet, one is vulnerable, eleven are endangered, and four are critically endangered. In the case of the Hainan gibbon, extinction is a real possibility - with less than 25 left, it's the most critically endangered primate on the planet.

The gibbons need our support. Also, they need to be at number one in the singles charts. The International Primate Protection League is attempting to cover the first of those needs, and using the second as a means of raising funds and awareness. It's a worthwhile and noble cause, and it seems positively churlish in these circumstances to point out that the 2010 remix really doesn't do Funky Gibbon any favours, slapping a trebly four-four beat over the top which smothers all the complexity out of the original arrangement. So, I won't.

Buy the MP3 single from Amazon, and/or head over to IPPL's JustGiving page to give them a bit more cash. Strictly speaking, Funky Gibbon has already been out for a week or two, so I suspect that its window for chart success has already come and gone, despite the inevitable Facebook campaign to make it the Christmas number one. But feel free to prove me wrong.