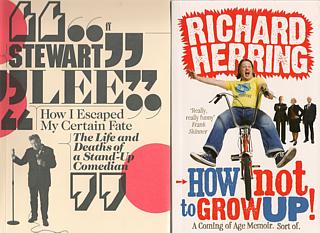 Stewart Lee was always the more analytical of the pair, and How I Escaped My Certain Fate is nothing less than a study of the very art of comedy itself. Taking 2004 as its starting point - at the tail end of an absence from the mic stand that was mainly taken up with the business of writing, directing and defending Jerry Springer: The Opera - it deconstructs the three stand-up shows which gradually made his name as one of the best comics in Britain. Stand-Up Comedian was an attempt at clearing the decks, getting all his old routines out of the way so he could start afresh. 90s Comedian took his anger at the abuse Springer received, and confronted the issues of blasphemy and offence in the most head-on fashion possible. And 41st Best Stand-Up Ever analysed his career following a pair of setbacks - the decommissioning of his BBC show, and his mediocre placing in the Channel 4 poll of the title.

The format is a simple transcription of all three shows - apparently taken from the commercially available DVDs, if YouTube clips are anything to go by - augmented by at least as much text again in the form of over-elaborate footnotes. In these, Lee pays tribute to his comedy heroes (Simon Munnery and Daniel Kitson loom especially large), points out the places where he frequently lost the audience (usually deliberately), and hurls out a slew of affectionately bitchy digs at his former partner ("Richard... has a great feel for the untapped comic value of such unusual words, as befits a man who spent most of the nineties playing Scrabble against himself and weeping").

It's not really the crash course in comedy that it's been received as in some quarters: rather, this is Lee justifying several years of work after the fact, showing how it took him from rotten underattended gigs in 2000 to the reactivated offer of a BBC show in 2009. And as justifications go, it's a very readable one. Lee's shows have always been carefully thought out - apart from Stand-Up Comedian, which he didn't realise had an overall theme until several years after its last performance - and it's interesting to hear his thinking behind the jokes. That's especially the case with 90s Comedian, one of the most brilliantly constructed hours of comedy I can recall, and one which requires 30 minutes of intricately crafted groundwork to prepare the audience for the spectacular horror of its second half. "It was too easy for critics of Jerry Springer: The Opera to use its language as a reason to attack its ideas. I would not be giving anyone that satisfaction."

If there's a fault with Certain Fate as a book, it's that it's as impersonal as Lee's standup itself. He always keeps his cards close to his chest when it comes to his home life, and the odd microscopic glimpse he lets slip - such as the way he and his wife Bridget Christie divvy up the events that happen to them both to see who gets to talk about them on stage - makes you hungry for more. Maybe he just doesn't do personal stuff very well: the slightly sentimental finale to 41st Best may well be a testament to that. Having said that, that one's the show which gains the most from transcription: I personally found it the least funny at the time, but on the page it doesn't suffer from the pressure to generate a laugh every few seconds.

Richard Herring, on the other hand, has no apparent problem with strip-mining his life for material. You could argue he's been doing it for at least eight years now, since he started writing a daily blog in November 2002. How Not To Grow Up is built around the immature, lascivious persona he's constructed around himself. As he approaches 40, is it possible that he can put aside childish things? It doesn't seem likely - on the eve of the big 4-0 itself, he's relishing the prospect of spending it "up to my plums in a 23-year-old." But let's face it, he wouldn't have written the book if there wasn't the prospect of a redemption of sorts at the end of it.

HNTGU (huntegoo!) isn't just a collection of blog entries - without wishing to spunk away the ending too dramatically, he'd been seeing his steady girlfriend for well over a year before he decided to mention her online. But it feels as messy as a collection of unrelated articles, with several different structural devices being used as various points - conversations with children, a countdown to the big birthday, a list of things he has to achieve before he can move on (and top of the list is a threesome...). It's a wonder the book has any coherence at all: what it does have is down to Herring's cheeky chappy persona, and his writerly eye for a telling image. Whether it's Chris Martin cheerily posing for a photo with a fan at an airport baggage carousel, or Herring himself being anally violated with a champagne bottle, he always manages to find the tiny detail in the situation that shows off his narrative skills.

For all that Herring's catchphrase over the last couple of years has been 'I just wanna be on the telly, please let me be on the telly,' it's amusing to discover that ultimately, that's the theme of Lee's book. Herring starts off by recycling the themes (and several gags) from his 2007 show Oh Fuck, I'm 40!, but the book slowly mutates into a rather sweet love letter to the girlfriend he picked up a few months later and is still seeing. Herring never gives Catherine's full name, so I won't either - but anyone with a copy of this book and the most rudimentary online research tools could probably track her down in a few minutes. And if you do, you can look forward to hours of fun playing He Said She Said by comparing her blog against Herring's to see where they match up.

So no surprises, really. Stewart Lee's book is terribly analytical, planned to within an inch of its life, and funny. Richard Herring's book is charmingly obscene, ramblingly digressive, and funny. Reading the two of them back to back, with their wildly differing personalities and occasional surprising intersections, makes you nostalgic for their old double act. Maybe Bridget Christie and Catherine should consider going on the road performing old Lee and Herring material? It'd be an act that could appeal to both comedy nerds and fans of attractive but unattainable women. There might be a considerable overlap between those two groups, though.

Congratulations to Richard Herring on his just-announced engagement to the mysterious Catherine. (Actually, she's not that mysterious at all. But this page still gets half a dozen hits a week from people Googling "richard herring girlfriend catherine" in an attempt to find out her full name. TRY HARDER.)