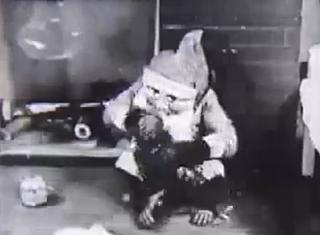 Books: Jim Bob from Carter USM has written a novel, and it's great. Storage Stories has a vaguely autobiographical bent to it, given that its protagonist is a pop star who isn't quite as famous as he used to be. In a series of short vignettes, we meet the various people he encounters in his job as the manager of a self-storage facility. Plenty of jokes and smart wordplay as you'd expect from Jim Bob, but there's a real heart in there as well, along with some charmingly slapdash illustrations which bring to mind Kurt Vonnegut's doodles in Breakfast Of Champions. Alternatively, you can get my own best-selling* book Monkey Round The World at a 10% discount if you buy it before December 15th 2010, by entering coupon code GIFT305 at the checkout.

Telly: I've been rewatching old episodes of the 1982 TV show Police Squad, following this week's news of the death of Leslie Nielsen. It just might be his best work, I think. Made by the Airplane! team a couple of years after their cinema hit, it tried to apply the same scattergun gag-a-second approach to the cop show format, and died on its arse after a mere six episodes. These days, of course, we know it better as the early development stage of what became the Naked Gun movie franchise. Except Police Squad does it better, because it shows Nielsen doing the thing that all the obituaries have praised him for: playing his role completely straight no matter how ridiculous the comedy gets. By the time of The Naked Gun, he's become convinced that he's a Comedy Actor, and spends all his time gurning and pratfalling like there's no tomorrow. The deadpan approach suited him better, and it's a shame he gave it up at the tail end of his career. Seeing as everyone else has been quoting Nielsen lines all week as if he wrote the bloody things, here's my favourite exchange from Police Squad.

Travel: As I mentioned back in the LFF Wrap Party, I spent a week in Gibraltar recently. Aside from the monkey pictures that I quietly hid inside the article, what else is there to recommend? Well, I stayed at the Eliott Hotel, having picked up a spectacularly good deal online from MyGibraltar - six nights for three hundred quid, the only downside being that I would have had to pay over a third of that again to use their wi-fi. (Happily, there are plenty of bars and restaurants which offer it for free.) Most of the social activity is based around the King's Bastion Leisure Centre, which includes a perfectly fine pair of cinemas that only cost a fiver to get into. Nice places to eat include Cafe Rojo (a rare bit of class in Irish Town - who would have thought a street full of badly-lit fake Irish pubs would be so dispiriting?), the quayside delights of Waterfront (although The Belated Birthday Girl was horrified by my tales of chicken stuffed with black pudding and wrapped in ham), and the cheerful little pizzeria Mamma Mia which you pass on the way to the fabulous cable car ride up to the Barbary Apes. Most mind-blowing discovery of the trip: Gibraltar is so small that the approach road to the airport and the runway are on a level crossing.

In the meantime, your Simian Substitute Site for December 2010 is a short film called Santa Claus' Story. Obviously, I've chosen it for the festive season, although you'll have to watch it for a few minutes to see where the alternative title comes from. It's a very peculiar experience all round, with the early shot of an apparently dead mouse being your first warning. It might be best if you just dive straight in without knowing anything else about it in advance. Enjoy. Or something.

* Well, it's the best-selling of all of my books. Shut up.