Home Archives/Categories About Me RSS Feed Mailing List Email
"this is up my arse for an oscar"
Back To The Future: Japanese Cinema Since The Mid-90s 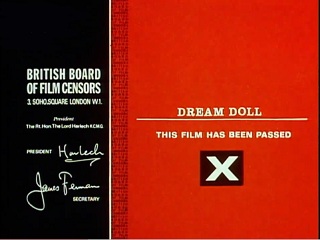 What's your favourite animated short film? Because I think this might be mine. It's about a man trying to have sex with an inflatable woman. Wait! Come back!

In twenty-odd years of going to animation programmes at assorted film festivals, I don't think I've ever seen anyone put on a retrospective of the work of Bob Godfrey, and that's appalling. Godfrey's one of the greats, and he's as close to a household name as you can get in British animation. Anyone who was paying attention to children's television in the 1970s should already be thinking of classics like Roobarb and Noah And Nelly, and getting a warm fuzzy feeling of nostalgia as they recall the wobbly-edged style of his artwork.

But kids like me didn't realise that Godfrey had a whole parallel career going on, one in which he made films where the edges weren't the only things that wobbled. I eventually found that out in 1982, during the brief run of O.T.T., the late night telly show by the Tiswas crew. They wanted to keep the format of a children's programme, but ruder: so that meant they needed to include bits of cartoon filler along the same lines. They showed Dream Doll by Godfrey (in collaboration with Zlatko Grgić) on the first episode, and you could tell from Chris Tarrant's reaction afterwards that he realised it was just that little bit too classy to fit in alongside the end-of-the-pier tat that filled the rest of the programme.

They showed a number of Godfrey cartoons in the following weeks, and I was astonished to discover that he'd been making dirty films for years, sending them out as supporting shorts to grown-up cinema features. In a way, I was kind of spoilt by seeing Dream Doll first - the rest of his adult work is closer to seaside postcard smut, but much funnier as a result. It started with Henry 9 Til 5 in 1970, which took the same route as Russ Meyer's The Immoral Mr Teas in depicting an ordinary man finding escape in sexual fantasy. Most of his films take what can only be described as a very British approach to sex, whether it's the domestic experimentation of Kama Sutra Rides Again, the agony aunt conundrums of Dear Margery Boobs, or the hidden dangers behind the promise of Instant Sex. And astonishingly, while Godfrey was making all this filth, he was also winning an Oscar for his biography of Isambard Kingdom Brunel.

Although Bob Godfrey's kiddy toons like Roobarb and Henry's Cat have made it out onto DVD, his adult films have become harder to track down. Five of them snuck out on a VHS compilation called Instant Sex in the late 90s. Several years later, I bought the DVD release of the collection, only to find that the cheapskates at Pickwick Video appeared to have literally mastered it from a copy of the VHS. A talent like Godfrey's deserves better treatment, frankly.

Well, now he's got it, thanks to his grandsons Tom and Jack Lowe, who've set up The Bob Godfrey Collection Channel on YouTube. It's a small but perfectly formed collection of the man's work, frequently prefaced with his own introductions to the films. It goes back as far as the 1959 Do It Yourself Cartoon Kit, a wild piece of Goonish surrealism that effectively invents Terry Gilliam before your astonished eyes: it goes all the way up to the present day with a teaser for Bob's War, a new short based around Godfrey's experiences in WW2. Unlike most of the unofficial clips I've linked to above, the Collection has been uploaded in HD for the best possible picture quality.

And the delightful Dream Doll is in there as well, meaning I no longer have to rely on that shitty quality DVD whenever I want to show it to people. Like you lot, for example. Embedding's been disabled for the YouTube video, so just follow this link, crank it up from 360p to 720p if your processor can take it, and enjoy.