Home Archives/Categories About Me RSS Feed Mailing List Email
On Your Way To Somewhere Else: Pick Of The Year 2010
Simian Substitute Site for March 2011: Monkey Truck 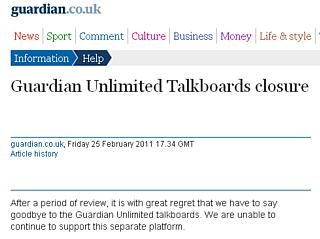 Looking at it one way: you can't deny that Film Unlimited had a good innings. When The Guardian's film talkboard finally shut up shop on February 25th 2011, it had been in operation for coming up to thirteen years, and had been in a virtually unchanged format for the last twelve of those. How many other websites do you know that have stayed that stable for that long? If you accept my previously stated hypothesis that internet years are the same as dog years, then 13x7 adds up to a long and venerable lifespan. We should all stand in admiration of its longevity.

Looking at it another way: imagine Guardian editor Alan Rusbridger stabbing your 91-year-old granny in the throat with a broken chianti bottle until she dies. Because that's what it actually feels like.

To begin at the beginning - it's late 1998, and The Unpleasant Lair Of Spank The Monkey has been on the web for about three months. I have plans to cover the London Film Festival on a daily basis, and I feel I should somehow be publicising this. Happily, I can: because for the first year ever, the LFF has its own official website. After a couple of years worth of amateur efforts, they've passed the job on to the Guardian newspaper, who have gleefully seized the opportunity to use it as a testbed for their own web development plans. They're asking for users to contribute film reviews, so I send them half a dozen or so and make sure my URL's included in each one. Everyone's happy.

Tucked away in a corner of the site, however, is a talkboard. During the Festival itself, a small group of regulars (including yours truly) begins to assemble there regularly to discuss the films they've seen. The interesting thing is, after the Festival finishes, the talkboard keeps going. The LFF site slowly mutates into Film Unlimited, the first in a series of specialist sites run under the Guardian Unlimited banner. At the end of the transitional period, the talkboard suddenly becomes Talking Film, part of a Guardian network of full-blown forum sites with threads and folders and all sorts of other cool stuff. Nevertheless, people will keep calling it FU for the next eleven years, long after the Guardian Unlimited brand has been retired.

FU was (he says, ominously moving to the past tense) a gathering place for film fans of all kinds. By the end of 1999, its membership had grown to include people outside London, and even the odd few outside the UK. By the middle of 2000, some of the London regulars had started meeting up on a regular basis, to see films, get drunk, or both (hence the FU catchphrase "then beer"). I'd become a serious fan of the site, and started dragging in people from the real world too. Old Lag came along to one of the post-film beers and enjoyed himself so much, he joined the talkboard. Meanwhile, work colleague Sergeant Todd was looking over my shoulder at what I was up to on my PC at lunchtimes, and we ended up in the peculiar situation of swapping mild insults with each other online while sitting at adjacent desks.

I've been on a few talkboard environments before and since, and FU was easily the most friendly of them all. Sure, you had the odd person who'd come along and try to spoil it. The BNP-loving sex pest who was banned several times but kept coming back under different names: the pretentious tool who insisted no worthwhile cinema had ever been made in the United States: the guy who pretended he was a civilian filmgoer, even though we all knew he was really a Guardian journalist who'd written an article for the paper about how he might once have been sexually abused by Richard Wattis. But the boards were carefully moderated: not in a heavy-handed way, just the odd deletion or written warning to keep things on the right track. (I'm the proud owner of one of those written warnings, dating back to an allegation I made once about Guardian film critic Peter Bradshaw and the size of his genitals.)

If you're looking for an example of a less friendly web discussion environment, you don't have to wander very far. A few years ago, The Guardian introduced an initiative known as Comment is Free, where effectively every news article and opinion piece was opened up for user comments at the bottom. (Although that comment privilege is quickly revoked when it becomes apparent that the article in question is demonstrably stupid.) When I suggested the other day that newspaper comments sections are the media equivalent of testicular cancer, it's CiF that I was thinking of.

FU's forum layout encourages a conversation - a back-and-forth between people who you get to know over a period of time, flexible enough to encompass anything from one-line snark to 800-word essays. CiF is all about the hit-and-run approach, with people rushing in, spraying their piss all over the previous few comments, and rushing out. With that peculiar sense of entitlement that people seem to only have on the internet, most articles will be followed with several comments complaining about the very existence of the article, as if the user had somehow been forced to read it. Losing the dividing line between newspaper content and user content ends up corrupting them both.

With two competing user input schemes in operation on The Guardian, it was inevitable that one of them would have to be closed down eventually. And inevitably, the bastards picked the wrong one.

I'm far enough away from my old job now to safely confess that FU was my prime timewaster of choice for several years in the early 21st century - at least, until that time around 2004 when they noticed, and blocked the site on the office network. I still kept visiting at evenings and weekends, but my usage of the site started dropping off around that period. But even though I was contributing less and less, I still popped in every so often to see what people were up to. My most recent visit was on Thursday February 24th, shortly after the end of the BBC2 run of Mad Men season 4: it was several months after most of the world had seen it, but I knew there was a place on the internet where people whose opinions I trusted were talking about it. And I knew that there was an archive of stuff like that dating back as far as 1999.

One day later, that archive was destroyed without any warning whatsoever, and all the Guardian talkboards were replaced with a derisory message announcing they were closed with immediate effect. A lot of the FU regulars are on Twitter: examining the timeline of FilmFan's FU list from 5.30pm on 25/02/2011 onwards, you can see the shock pass over them like a tidal wave, as people realise what's happened. (How cynical is that, to kill the site at going-home time on a Friday night?) Over the last day or so, the reaction has been a mixture of sadness, confusion and raw anger. A couple of hashtags have been set up to focus that rage (#guardiantalk for the boards generally, #ripfu for the film board in particular): a couple of replacement boards have been set up on public forum sites, Big Society-style. But given the lack of subsequent comment from The Guardian themselves, I think we have to assume the talkboards are now gone forever.

I've thrown in a few links to The Wayback Machine above, but this archive here is all that's left of FU online - a series of subject headings that now all point to that same "talkboard closed" page. Which is shit, frankly. It's a cliche to refer to a software application and a few megabytes of storage as a "community", but FU really was one. It had births, deaths and marriages: there were several couples that came out of the board and its real-life meetings, and The Belated Birthday Girl and I are proud to count ourselves among that number. So of course I'm sorry to see it go. Sure, FU had its ups and downs - back in 2004, I said "some days, they're still the sharpest and most entertaining film discussion forum on the interweb: other days, they're a highly intensive twat farm." But it was our twat farm: and taking it away from us is one of the dumbest things The Guardian may have ever done.

Nice work, Spank. Plans are afoot to do something to preserve the small legacy of FU. If someone already hasn't done it, you're bound to get an e-mail soon from someone telling you where it's being discussed...

Damn straight. Never posted on FU but I feel pretty much the same about FATGUT.

You took me to meet them once after some film at the festival. Sadly it was just an empty room, with you pretending there was people there. Ahhh such is the way with imaginary friends............ !

If you want a monument, look at this list I managed:

more than eighteen hundred movies argued over for all those years. Some films have 2,500 posts.

It's a sad loss. And given 24 hours notice we could have saved it all.

"When I suggested the other day that newspaper comments sections are the media equivalent of testicular cancer, it's CiF that I was thinking of."

Though not specifically speaking of the confederacy of dunces that is CiF, Maureen Dowd (of a paper whose talkboards have NOT been shut down) would certainly agree with you there. And so would I. The morons will not be missed, but FU as a whole will.

Here's the crimson one rightly complaining about said twits:

Hi Spank, there's an alternative board to the ones you may have seen, set up and written by an FUer, that you may be interested in. Could you please email me or find me on Twitter under the same name? Thanks.

sparafucile> The above piece was bashed out fairly quickly while I was still surfing my emotional reaction to the closure. If I'd had more time to think about it, I probably would have talked a bit more about the other Guardian talkboards aside from Film, all of which were killed off on the same day. There was a fair degree of rivalry between the boards, with everyone generally considering NewsUnlimited to be the biggest hotbed of mentalism. (Max Fischer's parting shot on its closure sums it up best: "Israel/Palestine will now never be solved.") But I always thought the Footy board had a friendliness on a par with what I'd encountered in FU: we even had a couple of joint football/film drinks sessions with them.

Suze> Which is funny, because they said exactly the same thing about you.

Yea but I was your invisible friend.