Home Archives/Categories About Me RSS Feed Mailing List Email
Simian Substitute Site for February 2011: The Monkeys You Ordered
"this is up my arse for an oscar" 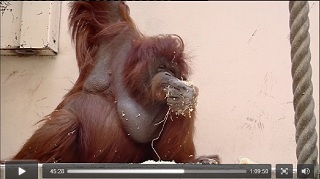 We've just passed the eleventh anniversary of the launch of digital film distribution in the UK - Toy Story 2 came out on February 4th 2000, and appeared in digital form in a grand total of three cinemas. I remember the scare stories about how they had to keep a 35mm copy of the film in the projection booth at the Odeon Leicester Square, for those occasions when the hard disk version crashed. But, as a distribution technology, it's matured: a large number of upcoming UK releases have that tell-tale (D) next to their title, and the absence of physical prints has subtly skewed the way in which film distribution works. More and more big films are getting UK releases on the same day as the rest of the world: more and more small films are able to get a reasonable showing across the arthouse circuit, without the crippling expense of making copies and shipping them from town to town.

But all of this counts for nothing if you don't actually have an arthouse cinema close to you. Which is why I think that Curzon On Demand is a major step forward.

There are video rental services out there which will stream old movies to your PC. There are also lots of dubious methods by which new movies can be downloaded. What Curzon On Demand does is give you the best of both approaches: new movies, streamed legally to your PC, on the same day that they come out in cinemas.

Obviously, there are limitations. This is a service run by the Curzon cinema chain, and it only applies to movies released through their Artificial Eye distribution network. True Grit may well be opening at the Curzon Soho this Friday, but you can be sure that it won't be appearing on Curzon On Demand: rather, it's being used to broaden the release of some comparatively niche interest arthouse flicks. The service has been running for about two months so far, and I'm only writing about it now because it's taken them this long to come up with a movie that piqued my interest.

Inevitably, it was Nénette, Nicolas Philibert's documentary about the orang-utan of the same name who's been residing in a Paris zoo for nearly forty years. It was released in a tiny number of UK cinemas last Friday: coincidentally, eleven years to the day after that first digital screening of Toy Story 2. It seemed like a good time to try this new technology out. So that evening, rather than travelling to the Curzon Soho for Nénette's opening night, The Belated Birthday Girl and I made ourselves a themed dinner of banana curry* and settled down for a night in front of my laptop to watch the film there.

A few facts to start. The service itself is based around weekly rentals - once you've picked a film, you've got unlimited opportunities to watch it for seven days. It only works in the UK and Ireland, and typically movies from their catalogue cost £8 for new releases or £4 for older ones. They recommend using the latest IE or Firefox as your browser, but it doesn't seem to object to Chrome if that's your bag. Amusingly, using Firefox gave me a bit of a fright shortly after I'd paid my £8: it initially refused to show me the film on the grounds that I was living outside the UK. It turned out that I still had my naughty plugin enabled, the one that allows my browser to pretend to be American so I can still watch The Daily Show. Once I'd turned that off, everything was just fine.

The quality, it has to be said, is pretty damn good. Obviously, it's going to be dependent on the speed of your internet connection and the speed of your computer. (In my case, the former worked well on both cabled and wireless connections: as for the latter, my teeny netbook struggled a bit, but my main machine coped just fine.) Image-wise, it's better than the BBC iPlayer in standard mode, not quite as good as the iPlayer in HD mode. The image blows up very nicely to full screen size, and apart from one tiny freezeup roughly halfway through the film, Nénette played more or less flawlessly.

[As for the film itself, I think I'd have been a little peeved at paying £25 for two tickets to see Nénette in a cinema, given its short running time (70 minutes) and televisual reliance on closeups. £8 to watch it at home on a PC screen seems about right. It's a rigorously experimental film, refusing to show any human beings on screen (except as reflections in the glass of Nénette's enclosure), limiting itself to shots of the orang-utans and the offscreen voices of zoo visitors and workers. Aside from some unnerving insights into orang-utan sexuality, it's a film that mainly exists as an opportunity to quietly observe and reflect on our relationship to these creatures, and if you're in the mood for that sort of thing it works quite nicely on that level.]

I realise that as a London-based cinemagoer, I'm massively spoiled: any film that gets a UK release will appear in a cinema somewhere in this town. In many other parts of the country, people see these films being reviewed in the papers, and then have to wait months for a DVD release before they can watch them. Curzon On Demand could be a first step in changing all that, and that can only be a good thing.

* Four unripe bananas, one mango, one papaya, one tin of chopped tomatoes, garlic, chillies, ginger, turmeric, coriander, cumin seeds, whole cardomoms, a handful each of roughly chopped almonds and hazelnuts, work it out for yourselves from there