Simian Substitute Site for February 2011: The Monkeys You Ordered 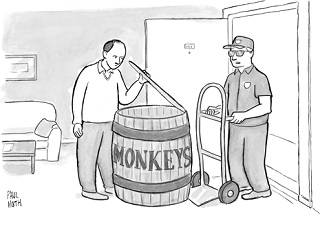 Internet: Hooray for The Lonely Island, the people mostly responsible for the one bit of interesting content I published on this site in January (more on that in a minute). Most of their best video work has been done on Saturday Night Live: unfortunately NBC, like many US networks, block all of their video to international users (although dubious workarounds are available). Nevertheless, Andy, Akiva and Jorma know that any fame they have outside of the US is due to people watching their SNL Digital Shorts on the internet. So they've done a deal which allows just their bits of SNL to be globally available (barring the odd occasional glitch). You can now go to the Lonely Island video page and take your pick from a hundred or so of their excellent sketches and songs. Their recent-ish single I Just Had Sex will burrow its way into your brain after a single listen, and bodes well for their new album coming in the spring.

Movies: I've been mostly seeing the same movies as the rest of you this month. Tron: Legacy never really recovers from the opening caption that effectively reads "only half of this movie is in 3D, but we've got your money now, so fuck you. Love, Disney." The King's Speech is as delightful as everyone says it is, although fans of Charlie Brooker's Newswipe will freak out when the actual speech of the title turns out to be accompanied by Beethoven's Theme For Doug Stanhope Swearing About America, leading you to assume there'll be even more effing and jeffing than there is already. But the best film I saw in January doesn't open here properly till February: Confessions, Tetsuya Nakashima's intense take on the Asian vengeance movie, more psychological and less stabby than its Korean counterparts. It opens at the ICA and elsewhere on February 18th, and should be seen with as little foreknowledge as you can muster.

Travel: "I'm a man of the world," as Australian cultural attache Sir Les Patterson once said, "never two shits in the same toilet." And two highly contrasting business trips have kept me away from updating this site for virtually the whole of January. First to Dubai, where all traces of beer and pork were barred from my diet: then to Munich, where beer and pork are two of the four basic food groups (the other two being more beer and more pork). Dubai's actually quite pleasant at this time of year, its winter being close to a temperate English summer. Lotus Hotel Apartments & Spa are a good place to stay in the Marina area, but don't expect to be able to walk anywhere from there: the whole city is in a permanent state of construction, and frequently pavements just vanish while you're halfway down the street. But the Metro system is stylish, cheap, and can take you to most of the places of interest, including the Dubai Mall and the nearby surrogate penis that is Burj Khalifa. It was a bit of a shock just a week after walking around Dubai in shirt sleeves to find myself snowed in in Munich, and hardly able to leave the Suite Novotel except to make the short daily walk to the office. On the final night I managed to make it out to Marienplatz and grab a bite at a tourist steakhouse, but I'm a little disappointed that the weather didn't clear up early enough for me to do a bit more exploring on the U-Bahn. Maybe next time.

In the meantime, your Simian Substitute Site for February 2011 is The Monkeys You Ordered. The New Yorker is more of an American cultural icon than a global one, but there's one cliche about the magazine that most people know: its cartoons are useless. All too often, they're just a depiction of a banal everyday situation with one tiny unexpected quirk buried in the picture or the caption. It's incredibly rare that one will ever make you laugh, or anything like that. The Monkeys You Ordered has a stab at improving these cartoons by the simplest of means: replacing the published caption with an incredibly literal one. Like this, for example. Or this. Or this. Or, inevitably, this.

It's a nice idea, but something similar's been done before, and that didn't end well. A few years ago, there was a piece on a site called Modern Arthur which proposed that the caption of every single New Yorker cartoon could be replaced by the words "Christ, what an asshole." It was picked up belatedly by the blogosphere last year, and got itself linked to repeatedly. But here's the thing: aside from the archive copy I've linked to above, the Modern Arthur website appears to have vanished from the web. I can't be sure, but I suspect that lawyers from Condé Nast, the publishers of The New Yorker, may have had something to do with that.

It comes as no surprise to discover that the most recent entry on The Monkeys You Ordered, dated January 22nd of this year, concludes with an announcement that the site is on hiatus following initial cease-and-desist enquiries from Condé Nast. Boo! Hiss! Everything's at a standstill while Condé Nast look up 'fair use' in their dictionary (perhaps they should try looking up 'funny' after that), and there's a risk that TMYO could end up going the same way as Modern Arthur, so you should probably visit there now while you have the chance.

The first person to send me "Christ, what an asshole" as a comment this month will get growled at by me. [waits]