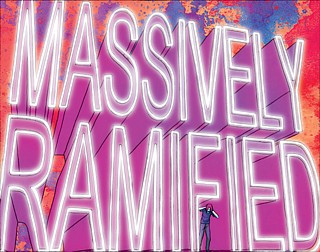 23 years ago, twelve strange children were born in England at exactly the same moment. 6 years ago, the world ended. This is the story of what happened next.

The opening three sentences of FreakAngels are printed as a caption over a picture of the Houses of Parliament half submerged under water. That, I believe, is what you call an opening. And from there, we're slowly introduced to those twelve strange children - or at least, initially, to eleven of them, the ones who are currently holed up in Whitechapel, one of the few bits of London that isn't totally flooded.

The twelfth FreakAngel, Mark, has gone missing: we discover this early on in the story, when a shouty Manc girl called Alice starts stomping through Whitechapel with a shotgun, looking to blow Mark's head off as revenge for him killing her brothers. As an outsider, Alice is our route into the backstory of the FreakAngels. We meet KK, the home-made helicopter pilot: Karl, the gardener: Arkady, the space case: Kaitlyn, the cop: Luke, the rapist: and all the rest. We begin to find out the connection between the FreakAngels and the current state of the world. And we wait for the inevitable moment when Mark comes back to Whitechapel.

The structure of FreakAngels makes that one hell of a wait. Because - and I probably should have mentioned this earlier - FreakAngels is a weekly webcomic. And it's free. Every Friday at noon UK time, a button is pushed somewhere at Avatar Press, and another six pages of story roll out onto the internet for everyone to read. (Except for the occasional weeks when they can't pull it off, of course. FreakAngels is produced to incredibly tight timescales - for instance, Ellis tweeted on March 29th that he'd just finished the script for the episode due for publication on April 8th. When people are working that close to the wire, you can understand when the ball gets dropped once every couple of months.)

Rather like Daytripper, it's interesting to consider the different ways that FreakAngels can be experienced by its readers. For the early adopters, it's a series of weekly six-page episodes - a format which, to those of us of a certain age, brings to mind the way stories were serialised in British weekly comics all the way up to 2000 AD, with a cliffhanger at the end of each episode. Sure, they're being presented as web pages rather than as images on paper, but the principle's the same. And it's delightful to see that Ellis and Duffield have really thought about how the comic page will look on a screen. They use a simple 2x2 grid to keep the panels as simple as possible: you only need to scroll down once to get the full impact of a page, and on some occasions they've even used the scroll function as a method of generating suspense. (Like here, for example.)

Now, here's the bit that really seems to confuse people. You can read all of FreakAngels for free right now on the web, starting at page one and going all the way through to the most recently published issue. (It's backed up by a discussion board called Whitechapel, another one of those web communities that Ellis likes so much.) But every 24 episodes, Avatar have been gathering up these web pages and publishing them as 144 page graphic novel collections. Books that you have to get from a shop, and pay money for. And - here comes the confusing bit - those books are selling really well. While the actual pages remain viewable on the internet for free.

What Ellis and Duffield have done is to combine the best of both worlds in a truly fiendish fashion. The webcomic version gives you a quick, regular hit of narrative: but for long-term pleasure, you really need to have these pages in front of you on paper. And the story flows beautifully at graphic novel length: Ellis may be writing the individual episodes at the last possible minute, but you can tell that his overarching plot has been carefully in place from page one. His usual trademarks of hard science fiction, smart characters and inventively rude dialogue are all present and correct, coupled with an almost audible delight at the torment he can cause in readers with the prospect of those cliffhangers every six pages. (One particular transition from the end of one printed volume to the beginning of the next is the single funniest moment in the whole saga, purely because it's so utterly frustrating.)

It's artist Paul Duffield who possibly has the more tricky task here. He's got to give individual personalities to a large ensemble cast, and he's got to make sure that the spectacular post-apocalyptic settings don't overwhelm the very human stories taking place within them. He completely nails it: he establishes the characters of the dozen FreakAngels pretty much instantly, and (with the aid of colourists Alana Yuen and Kate Brown) he can provide the show-stopping moments when they happen. He's got a deceptively simple style, but when you read enough of FreakAngels in one sitting you realise he's performing artistic miracles with it.

At the time of writing, there are fifteen or so weekly episodes of FreakAngels left to run. And 129 of them still out there on the web to read for nowt. You can look at the first page via the link at the end of this paragraph, but be warned you'll probably end up wanting to go onto the next page after that. Then the next, and the next. And eventually you'll buy all five paperback collections and have to wait for the sixth. So, you know, no pressure. Click here.