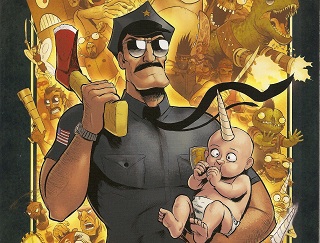 Here’s how the story goes. It’s Christmas 2009. Malachai Nicolle is a five-year-old boy: Ethan Nicolle is his 29-year-old stepbrother, visiting for the holidays. The two of them are playing cops and robbers together, with Malachai taking on the role of Axe Cop, a policeman whose approach to law enforcement is driven by his ownership of “the perfect fireman axe”. As Malachai comes up with increasingly daft scenarios for the two brothers to act out, Ethan – a cartoonist by trade – thinks it would be fun to draw some strips based on Malachai’s stories. A month or so later, Ethan tentatively posts the first of those stories onto the internet. And a jillion people visit the site.

One year on, and things have gone even more nuts. Malachai and Ethan are still producing webcomics on a regular basis at axecop.com. Proper publishers Dark Horse have just brought out a book of the first year’s worth of web strips, and are in the middle of serialising a new three-part adventure – Bad Guy Earth – as actual monthly comics. Meanwhile, official motion comics are already being made out of the strips, while fans are putting their own films on YouTube, raising the tantalising possibility of Axe Cop: The Motion Picture hitting cinemas in the future. So that’s what a child born in 2004 has achieved over the past twelve months. How about you?

As with the last two comics reviews I've posted up here, I suspect Axe Cop plays very differently as a collected book than it did as a set of webcomics - although in this particular case, I didn't really get to read it properly until the book came out. Either way, it's a comic with a guaranteed big laugh every few pages, because Malachai devises his plots in exactly the way you'd expect a kid to. It's a perfect example of 'and then...' storytelling, where he leaps without warning from one incident to the next, and the only connection between them is that the second incident is something way cooler than the first one. Whenever there's a risk that things may get dull, he throws in space aliens, or ninjas, or a duck that lays exploding eggs. Only Chris Sims has tried to cram as much awesomeness into a single comic, and you can tell he has to work at it.

Also, it has to be said that the level of wanton cruelty that takes place in these stories would have made absolute perfect sense to me as a five-year-old. (The sentimental ending of the 2010 Xmas Special is possibly my favourite example of this.) The only place I've found any criticism of Axe Cop is on a parenting site complaining about the level of violence that Malachai must have been exposed to in order to come up with these stories. It's called play, people. Try to remember it. For those of us who do, it's a glorious reminder of the sorts of moral rules that kids arbitrarily impose on their personal fictional universes - in Malachai's case, most of them involve characters being clearly on a Good Team or a Bad Team, and the way that getting Evil Blood on you can instantly cause you to shift from one team to the other. Furthermore, that there is no problem which can't be solved by decapitation, poisoning or explosions.

The reason why I've been looking for criticism is because of a complaint that someone (who shall remain nameless) has made to me about Axe Cop, which nobody else out there seems to have thought of: that it's fake. That Ethan Nicolle has come up with a series of surreal comedy cartoons by himself, and assigned authorship to his younger brother as a gimmick to get people's attention. I don't think that's true, except in the most literal sense: if you're expecting Malachai to have sat down at a typewriter and come up with a full script for Ethan to draw, then you'd be sadly disappointed. But Ethan's copious notes in the book version explain that a typical Axe Cop story comes out of a play session between the brothers: Malachai says "I'll be Axe Cop, and you be... [looks around for suitable weapon] ...Flute Cop," the two of them mess around in their characters, and then Ethan adapts the results into a comic. As he says in the site FAQ, "if you wanted to get technical, you could say Malachai comes up with the stories, then I write it and illustrate it... but I just feel lame trying to cling to my writing credit next to a five year old."

Ethan's notes in the book, as far as I'm concerned, are what take the collected edition to another level entirely. Because they're along the lines of a director's commentary to a movie: and given that the creative process is one of the things that initially attracts people to Axe Cop, it makes sense to include as much detail as he can in there. As the strip gets more and more ambitious, climaxing in an epic 45-page explodeathon called The Ultimate Battle, Ethan spends more time in these notes thinking out loud about why he's doing this. At the start, he's just having fun with his little brother: once the internet gets involved, he realises he has to up his game a bit, and you can see his art developing over the course of the year. The sheer dynamic power he brings to The Ultimate Battle's subplot - which he accurately describes as "Die Hard in a baby suit" - is something you feel he couldn't have drawn as effectively at the start of the year.

But halfway through, he realises a hugely important thing: what people love most about Axe Cop is the sense of innocence. This genuinely feels like a young boy's imagination let loose without any restraints, to the extent that every so often a line comes through that feels just a little bit too knowing ("just then, a truck full of ninjas showed up"), and you can tell it's more Ethan's doing than Malachai's. And it's about then that Ethan discovers what his real job is - it's to document the way that young Malachai's storytelling brain works, before teenage snark and post-modern irony start getting in the way. "A race with puberty," as one chapter heading puts it.

So far, they appear to be winning the race: but there's something desperately poignant in the knowledge that Axe Cop's creators will only have a limited amount of time before they're literally unable to write any more stories in quite the same way. But for now, we've got at least one published book of comics to enjoy, plus (presumably) a collected edition of Bad Guy Earth to follow soon. Read Axe Cop now, before Malachai realises exactly what he's doing: it won't be as good once he does.