Home Archives/Categories About Me RSS Feed Mailing List Email
MOSTLY FILM: On The Outside, Hacking In
SS/EE 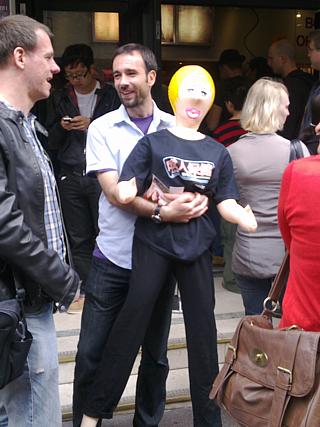 Anyhoo: Terracotta. We were there in 2009. We wanted to be there in 2010, but we were in Japan at the time. So I was very keen to do the 2011 Festival, and the chance to create a big chunky article for Mostly Film out of it was appealing. As you can see from the article itself, though, things didn't go exactly to plan at the start. (This was also my excuse for the lateness of this month's Simian Substitute Site, as well as its focus on Austin, Texas. There's not much I can tell you about my few days in Austin, except that the Sichuan Garden is indeed a rather fine restaurant, though I'd have to quibble at that "top 100 in the US" tagline: it's just a strip mall Chinese diner, but with a great kitchen. Definitely worth a visit if you like your Chinese food spicy, as The BBG does.)

I'm quite pleased with how quickly this review came together - I was taking notes on my phone at the end of each day, and was able to deliver a first draft of the piece by 11am the day after the festival finished. A few bits and pieces have come to light since then, and rather than confuse the Mostly Film editing process with them, I've decided to share them with you lot. Think of them as DVD-style Special Features, or maybe Bonus Beats if 80s dance records are a better cultural reference point...

Everything else you need to know is in Terracottadammerung, published on Mostly Film today. I shouldn't be hitting you with another one of these for at least three weeks now, promise.

Perfectly happy with the outcome of the audience award vote, although in the end Milocrorze just pipped it in my vote. Deliberate quirk can go one way or the other with me, but in this case it just took me along with it. I keep finding myself trying to say "Ovreneli Vreneligare" - which is even harder to say for Japanese pronunciation, although there's a kind of poetry to it if you try it enough times.

Also up there with Red Light Revolution for me just behind Milocrorze was Petty Romance. So it seems that the lighter and funnier films did it best for me this year.

As we only saw 11 films, I could probably produce a complete listing in order - but I won't go that far.