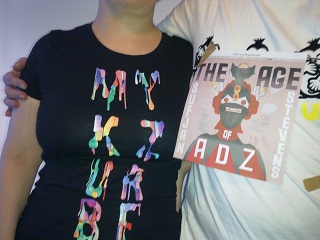 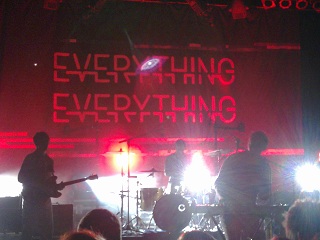 “Yes with better haircuts.” It’s a phrase I use whenever I want to wind up The BBG on the subject of Everything Everything, and she’ll be expecting it to turn up in here somewhere, so let’s get it out of the way now. The wonky changes in tempo, the incomprehensible lyrics, the falsetto vocals – although to be fair, it’s a very limited subset of Yes’ repertoire I’m thinking of, and it may only actually be one song. Going For The One was the best thing Jon Anderson’s geriatric prog army ever recorded, for my money: ludicrously complicated in parts, but with a real pop sensibility at its core. And I think that’s what Everything Everything do.

The last time we saw them live was in the autumn of 2010, when they’d had a couple of minor hit singles and the Man Alive album had just come out. You could already tell they were heading for bigger things. For one thing, their lighting rig was far too big for the Camden Barfly: for another, they had a loyal collection of fans who already knew all the words to an album that had only been released three days earlier.

They seemed more comfortable here on the stage of the Shepherd’s Bush Empire, even as they kept on boasting about how it was their biggest show to date. And it’s interesting to compare the audiences at those two gigs. The BBG made her way down to the front of the stage, and then started to worry that the crowd might get a bit rowdy. I thought that wasn’t likely based on our earlier experience at the Barfly, where the audience was too busy factorialising the time signatures to cause any trouble.

And for part of the gig, things were fairly similar. But I started noticing something around the time they launched into MY KZ YR BF, which I guess we have to think of as The Hit. (Certainly it’s the only one that has a t-shirt dedicated to it on the merch stand.) There was a noticeable rise in energy in the room whenever one of their singles was played: and crucially, the level didn’t drop down again by much afterwards. (Unlike, say, the time I saw Nizlopi play this room, and watched them play their big hit JCB halfway through the gig, after which roughly one third of the audience went home.)

That’s when I realised that for all the complexity of some of Everything Everything’s songs, they always have a tight whistleable hook buried in there. (Literally, in the case of Schoolin’.) By the time of the encore of Photoshop Handsome, those hooks were creating perfect 16 bar moshpits: everyone leaping around like nutters for the yellalong chorus, and falling back to comparatively sensible chin-stroking for the verses. I suspect it’s that tension between their art rock trappings and their desire to have Big Pop Fun that keeps them interesting for me.

So, yeah, Everything Everything make for a good night out overall. Isn’t it time they wrote some new songs, though? 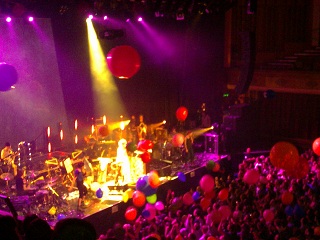 The BBG on Sufjan Stevens

I quite liked Sufjan Stevens when I first heard him. But when I'd seen him once or twice, I'd started to become aware of a few things I wasn't so sure about. First, there was the religious side to him which occasionally popped up. And then there was his idea to do albums themed on each of the US states, which somehow came across to me as a rather pretentious project. And then there was him giving up on that idea so soon, which for some reason annoyed me even more. Still, I would never actually say I disliked him, so when Spank wanted to go and see him, I was happy to go along. And when we couldn't get into the London show, and it turned into a day trip to Brighton, well, there are nice places to eat in Brighton, so that was fine too.

If, as Spank insists, Everything Everything are Yes with better haircuts (I don't see it myself - I'd say it's more Jazz influenced than Prog), Sufjan Stevens is maybe an American Peter Gabriel-era Genesis with a better haircut and added God-bothering. At the Brighton Dome gig, that comparison definitely comes across, with the big costumes and impressive visuals, songs changing time signatures, and a general avoidance of the 3-minute pop song format - the most extreme example of the last being the 32 minute version of Impossible Soul.

Now, I own The Lamb Lies Down on Broadway and a couple of other Genesis albums from the early 70s, so I can't really complain about any of that in principle: but since then we've had punk, so there's less excuse for that kind of behaviour now. But I will admit that some of the songs are quite fine - for me, the pick of the crop was Too Much, which pulls off the trick of being a proper danceable pop song (albeit nearly 7 minutes long on the night) in spite of its 7/4 time signature. Seven Swans was a very pretty, almost folksy at times, introduction (reminiscent in some ways of Genesis's Musical Box), setting the visual tone for the evening with the huge angel wings and the dramatic lighting on the heavier sections, which were nicely enhanced by the use of a horn section. Other highlights include the rather dream-like Enchanting Ghost and the big encore finish of Chicago, accompanied by huge balloons dropping down onto the main dance-floor below us.

For me, as a non-fan, the low point was probably the indulgence of Impossible Soul. At 32 minutes, this beats even Genesis's similarly extended and multi-sectioned Supper’s Ready by nearly 10 minutes (and that's the last Genesis comparison I'll make!). Of the other songs, the main one which stands out to me was I Walked, which there's something about which reminds me a lot of some other song, which I am struggling to bring to mind, so I'm actually finding a bit annoying. The song itself is fine, though!

The one final peculiarity I want to mention, nothing to do with Sufjan Stevens himself, but which added a strangeness to the evening, was the grinning picture of Prince Harry which for some unknown reason adorned a stand on the stage.