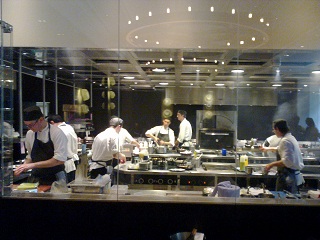 We had a lovely time in San Sebastian, thanks for asking. We'll get around to writing about it eventually, I guess. And while we're on the subject of anniversaries, it's now over two months since Will and Kate tied the knot while we were in New York, and that still hasn't been written up yet either. Hopefully, I can get something posted in time for their one-quarter anniversary.

Meanwhile, I'm putting all that on the back burner to tell you about what happened the day after The Belated Birthday Girl and I came back from Spain, when we were invited to lunch at London's hottest new restaurant with no more than 90 minutes notice.

The sum total of our experience of Heston Blumenthal's cuisine, up until now, has been a couple of ice creams from his tent at the 2007 Manchester International Festival. Heston being Heston, these were of course incredibly wonky ice creams. The BBG had a chocolate wine slushie, a combination that in her eyes could only possibly be improved by putting a scallop on the top and having Joss Whedon personally serve it to her. Meanwhile, I ended up with a strawberry and vanilla sundae that had been spiked with leather essence, which I said at the time "does make you feel like you're eating it in a shoe shop". It was a little bit of silliness in the middle of a festival day, and we assumed that unless we battled against the booking system at The Fat Duck, that was probably the closest we'd ever get to eating anything the Gooner-loving slaphead had cooked.

That still may well be the case, as you'll see. But when it was announced that Blumenthal was about to open up his first London restaurant - Dinner by Heston Blumenthal, at the Mandarin Oriental hotel in Kensington - our interest was piqued, particularly when we discovered that its opening few months included the week of our tenth anniversary celebrations. So when we booked the hols in San Sebastian, we also made enquiries to see if we could grab a table for the weekend after we got back.

Dinner is doing its bit for diner democracy by taking online bookings on OpenTable, the restaurant site I've raved about here in the past. Sadly, it turned out that the opening booking period was pretty much scorched earth by the time we got in touch, and all the evenings in mid-June that we could do were fully allocated. But there was a glimpse of hope on the horizon - the Friday lunchtime (the day after our return from Spain) was also booked out, but taking applications for a waiting list. As we'd both be off work that day anyway, we decided to take a chance and put our names down.

We didn't know exactly when we'd find out if we'd got a table or not. I'd suggest that 10.45am on the morning of the proposed lunch is ludicrously short notice - when they phoned to tell us we were in, I was actually just on my way out to the corner shop to pick up a couple of things for a late breakfast. (Hey, we'd just come back from holiday, remember?) That breakfast became a cup of tea, two mouthfuls of muesli and a burst of adrenalin: and ninety minutes after the call, we were in the bar of the Mandarin Oriental, sipping on non-alcoholic cocktails and waiting to be shown to our table. The room itself is rather lovely - if you end up at one of the tables near the back, you can position yourselves so that one of you gets to look directly into the glass-walled kitchen in the centre of the room, while the other gets to peek through floor-to-ceiling windows onto the rain-sodden tramps in Hyde Park. (Guess how the split worked out on the day.)

So, what's on the menu? You know how Blumenthal rolls, so you're probably imagining some sort of amuse-bouche made out of wallpaper paste and dreams. Well, it's not quite that simple. Blumenthal - or, more accurately, his head chef Ashley Palmer-Watts, who appears to have done most of the work while Heston negotiated his name into the title - anyway, between them they've come up with a list of dishes purloined from several centuries worth of old English cookbooks. This is the first menu I've ever read that's had a full bibliography on the reverse side, providing references for all the recipes. And if you can negotiate your way through the website to the non-hotlinkable menus, you'll see that those dishes are a little on the pricey side, particularly for someone who's just come back from a few days in Spain that appeared to be all about eating stuff that was lying around on bars. (More on that soon, promise.)

However, the set lunch menu - £28 for three courses - gives you a handy way into the restaurant without completely breaking the bank. So we knocked back our non-alkie cocktails, replaced them with a decent bottle of Albarino (which thankfully cost less than all of the whites on the website's sample wine list), and proceeded to make our way through all of the options on the menu, splitting the difference between the two choices for each course. Given The BBG's non-carnivorous nature, it was pretty easy to work out who was having what for at least the first two courses.

For starters, she had the Lemon Salad: she found it sharp and lemony, with an effective combination of goats curd and raisins along with interesting leaves (and it's not often that you hear her describe leaves as 'interesting', I can tell you). This means that I ended up with the Ragoo of Pigs Ears, which worried me a little because it's impossible to read those four words without imagining actual pig ears sticking out of the plate. Not the case, of course: carefully rendered down with anchovy, onions and parsley, it had an interesting delicate pork flavour without the eariness I'd been dreading.

The main course was a similarly obvious choice between meat and fish. The BBG's Cured Salmon was perfectly cooked, soft and pink inside, with a happy bonus of little baby artichokes thrown in. Meanwhile, my Roast Quail (served with smoked parsnips and thyme) had quite a delicate flavour which balanced beautifully with my companion's usual excellent choice in wine. However, both dishes were a little low in carbs for our liking - but a beautifully cooked single portion of Jersey Royals sorted that out between us.

And so to the puds, where The BBG was drawn to a repeat of her Manchester 2007 experience. The Chocolate Wine at Dinner is of the hot variety, as opposed to the cold slushy she had four years ago. It was accompanied by a similarly chocolately millionaire tart, but she felt it was almost superfluous given how good her winey hot chocolate was. As for me, I had the less-interesting sounding Orange Buttered Loaf, which turned out to be sponge in a crispy orange butter coating, enhanced quite a bit by the mandarin and thyme sorbet on the side.

Not bad for £28, is it? Of course, there were extras on top - £39 for the wine, £4 for a bottle of mineral water, £4.50 for those Jersey Royals. The biggest shock on the bill was discovering that the latte I'd casually asked for at the end of the meal cost a whacking £5.50 (it wasn't listed on the menu). But aside from that, it made for a very lovely Friday lunch, leaving us both pleasantly stuffed and pretty much incapable of doing anything else for the rest of the day. So God knows what the people who were there on business managed to achieve that afternoon.

The food wasn't as spectacularly different as you'd expect from the Blumenthal brand name, just very, very well done. However, you may encounter more of his trademark gastrosurrealism if you can stump up the cash to go a la carte, as opposed to the cheaper - and easier to get into - set lunch. It's your choice. Still, at least Heston's finally made it into London: all he needs to do now is get himself a hit record like the Masterchef guys.