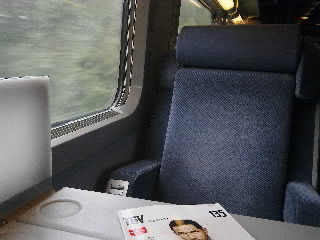 Mark Smith - the one without a middle initial - is better known on the internet as The Man In Seat 61. For several years, that's pretty much all anyone knew about him. He was the anonymous owner of a website whose purpose was simple: if you wanted to travel from the UK to somewhere else in Europe and do it all by train, he'd tell you how.

It's weird to think how isolated a nation Britain was two decades ago (physically, at least - we'll leave the more psychological aspects of that comment to one side this time). If you wanted to get off this island and see what else was out there, you either took a plane or a boat: either way, it was a lot of palaver for what was really a comparatively short journey. Back then, we kept hearing reports about how the Channel Tunnel was hitting yet another delay, and assumed it would never happen. But here we are now, able to get from the centre of London to the centre of Paris in a little over two hours, and all without seeing any water apart from the overpriced bottled stuff on sale in the Eurostar buffet car.

Suddenly, the whole of Europe was opened up to us. Combine that with the wide acceptance of the Euro as a standard currency (present company excepted) and the availability of European train information over the internet, and that's a whole new level of exploration opened up to us. But that train information was scattered over various national railway websites, in a bewildering variety of languages, and you know that's the sort of thing we Brits have problems with.

Enter The Man In Seat 61. Since 2001, his website has acted as a portal to the world's railway systems. Give him a destination, and he'll tell you how to book tickets, where to find timetables, and which are the most efficient changes to make to get where you want to go. All those little hints and tips that experienced travellers pick up over the years are scattered throughout his site, symbolised by his own nom de web: if you're travelling on the Eurostar, seat 61 is the best one to aim for in terms of position and isolation from other passengers.

What kind of trainspotter gathers this sort of information? Well, a former National Rail employee, as it turns out. The Man had to lose some of his anonymity in 2008, when he published the first Seat 61 book under his real name of Mark Smith. (He´ll lose even more of his anonymity if his online TV pilot makes it to a series.) In his introduction, it became apparent that his love of railways as a form of transport bled into both his work and his personal life. For Smith, part of the joy of train travel comes from the fact that it's appreciably slower than flying, giving you the chance to relax and appreciate your surroundings. And if avoiding the use of planes cuts down your carbon footprint, so much the better.

This applies even more to his 2011 followup book, The Man In Seat 61 Worldwide: whereas the first book focussed on European destinations, this one covers the whole damn planet. Obviously, he has to bend the brief slightly here to cover other non-air methods of transport, so we get a hair-raising insight into the time and money which would have been involved if I'd chosen to sail to the US and Oz last month. But once you're there, Smith breaks down the global rail system on a country-by-country basis, with his usual attention to detail. And if you fancy an epic cross-continental railway adventure, the early chapters look at some of the great rail routes like the Trans-Siberian Railway, and what to expect if you take them.

Both books are adaptations of material from the website: what's there to encourage people to pay money for a hard copy? (It's a common question, I know.) The raw data itself will drift out of date as time goes on - the first Seat 61 is already in its second edition. But the book version builds on the raw data of the website, with tons of local detail from Smith and the network of correspondents he's built up since the site started. And books are much better for random access - just diving in and looking for ideas of where you may want to go next. If you're the sort of people who like that sort of thing, that is.

I'm writing this on June 14th, 2011. Exactly ten years ago today, The Belated Birthday Girl and I went on our first date. We already knew we had a love of films in common, so we decided on a non-movie option and went to an Ed Harcourt gig instead. It turned out that we had a love of music in common too, as well as lots of other things. One of those things was travel: and although we've frequently whizzed out to various locations by plane, some of our best journeys have been done by train, most notably our cross-Europe adventure in 2007.

Today, we're in San Sebastian in Spain, celebrating our tenth anniversary. Eurostar to Paris, TGV to Hendaye, Euskotren to San Sebastian. We wouldn't have thought of doing any of that without The Man In Seat 61. So although today's a day for selfishly celebrating what we've done over the last ten years, at some point we'll raise a glass of Spanish plonk and toast Mark Smith for the amount of travelling fun he's contributed to over the same ten years. And here's to many more of them.

Just came across this post and am thrilled that The Man in Seat 61 tempted you away from planes and on to trains. It's true that when you're flying, if you think about it too much, being shot through the air in a floating capsule with wings is kinda unnatural!

I'm biased since I work for a rail startup but I think there is no better way to see a country than to go by train which lets you see the lie of the land and get a feel for how the people go about life. We know Mark personally, who is helping us do what we do better - so hopefully together we can sew up the problems with booking European rail.

Anyway, great read and I hope that you have been able to explore even more of Europe and the romance of the rails since you penned this!

Title of the article is soo strange..!