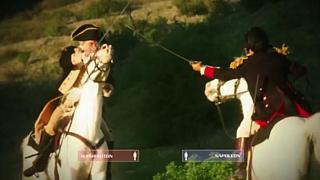 Deadliest Warrior’s premise is ruthlessly simple. Remember when you were at school and had all sorts of arguments along the lines of “if [historical figure X] got into a fight with [historical figure Y], who would win?” Well, each week this show spends an hour conducting an exhaustive amount of research into that very question. Tactics are discussed, weapons are demonstrated, computer simulations are programmed. And in the final four minutes, the results of those simulations are re-enacted as we get to watch – to take a classic example from the first season – a Spartan and a ninja beat the crap out of each other until one of them dies.

A show like this lives or dies by the quality of its frontmen. (Yes, of course they’re men.) It’s fun to look back at Deadliest Warrior’s first season and see how desperate they were to assign Hard Bastard credentials to a bunch of guys who turned out to be complete pussycats really. Geoff Desmoulin, biomedical engineer AND KARATE BLACK BELT, gathers raw data on the speed and power of the weapons being used. Armand Dorian, ER doctor AND ULTIMATE FIGHTING PHYSICIAN, analyses the damage they can cause to the human body. And Max Geiger, computer whiz AND UM THAT’S IT REALLY, does a lot of typing and pushes the big button at the end which decides who! is! deadliest!

The first time many people in the UK heard about Deadliest Warrior was when it was discussed on Charlie Brooker’s TV-based gameshow You Have Been Watching. A lot of mock outrage was puffed up over the slightly queasy premise of DW’s season one finale, in which the IRA went into battle against the Taliban. Yes, it’s fun to pit historical figures against each other, but it gets a little more worrying when you’re dealing with present-day combatants who require a disclaimer that “the producers do not endorse, sanction or condone any of the described activities or opinions.”

But Brooker seemed to ignore one key point in all of this: Deadliest Warrior is fun. It’s a very wrong sort of fun, and gets wronger as the contestants get more modern, but it’s still played with its tongue firmly in its cheek. The most obvious indicator of that is the show’s secret weapon – its massively overripe voiceover narration. They’ve cunningly stolen the narrator from the movie 300, Australian actor David Wenham (he’s ashamed enough of the gig to do it under the pseudonym Drew Skye, but it’s generally accepted it’s really him). Wenham’s voiceover pumped up the mythic aspects of 300 to ludicrous extremes, and he’s performing exactly the same role here, audibly relishing the nonsense he has to read out. "The gladiator: proud, thrilling killer of ancient Rome. An Apache: fierce, scalp-taking master of death. WHO! IS! DEADLIEST!" Meanwhile, the laddish interplay between the three hosts turns the show into Top Gear with a body count, as their enthusiasm for the acts of mayhem on display is thoroughly infectious. (A Deadliest Warrior drinking game would require you to take a swig whenever anyone reacts to a violent injury with the word “nice!”, but such a game would leave you paralytic by the end of the episode.)

As I mentioned earlier, Deadliest Warrior has just started its third season, and it’s interesting to see how the show’s been retooled from year to year. Season two didn’t deviate much from the initial template, except in terms of its gore: the ballistics gel torsos and pig carcasses used for weapons demonstrations (“with the same consistency as human flesh”) have been ludicrously overstuffed with blood, giving you the impression that you’re watching the most violent TV show ever made. That seems to have been dialled back down again for the new season, but we have a couple of cast changes. The big news is that Max Geiger is out – although you could tell in season two that having the team nerd trying to contribute to the weapons demos wasn’t really working. (Mind you, Armand Dorian doesn’t bring much to the table in those sequences either: he looks at a gel torso with its head hanging off and says “this man would be dead”, and you don’t really need medical qualifications to do that.)

Geiger’s role has been sort of split between two people. Our new computer guy is Robert Daly, but he’s conspicuously kept chained to his terminal and doesn’t get to do any of the fun shooting/stabbing/exploding stuff with the rest of the team. That part of the job has gone to weapons/tactics specialist AND FORMER NAVY SEAL Richard "Mack" Machowicz. It’s early days with Mack as yet, but his discussions of the planning that goes into warfare are an interesting addition to the format. Combine that with Dave Baker’s more detailed analysis of the weapons being used, and you start to get the feeling that season three’s brief has been to pump up the educational content.

Which is interesting, because that kind of ties in with Charlie Brooker’s most recent rant about the show. In his series How TV Ruined Your Life, he bemoaned the state of factual television, and came to a somewhat fatuous conclusion: forty years ago we had Kenneth Clark’s Civilisation, and now instead of that we have Deadliest Warrior. It’s like comparing apples with Orange mobile phones: the two are doing entirely different things. Deadliest Warrior has no real aim other than to entertain, and it’s amusing watching its makers pretend it's an educational show when it’s obvious that everyone’s just there for the OTT action sequences.

The most ironic thing about all this? I suspect that nobody in the UK gave a damn about Deadliest Warrior until Brooker started complaining about it. Shortly after that first discussion on You Have Been Watching, it was announced that the show had been picked up for British transmission, and you suspect that wouldn’t have happened without Brooker’s pre-publicity. The first two seasons were shown by Bravo, with repeat runs for Freeview paupers on Channel One (although, hilariously, that infamous IRA v Taliban episode has never been shown here in full, as apparently we’re a little sensitive about seeing the British army’s two most recent opponents fighting each other). However, that leads us to the current problem: since the conclusion of season two, both Bravo and Channel One have been taken off the air, and there’s no indication as to who – if anyone – will show season three in the UK.

So, the best you can do for now is watch this video, and then go to the Spike TV website and stream the episodes from there – the US TV run of season three started July 20th at 10pm on Wednesday nights (9pm Central), and episodes appear online shortly after that. The first one pits George Washington against Napoleon Bonaparte, and has all the entertainment value that you can imagine: although as this is a US show, it’s probably not a spoiler to suggest that the outcome may be a little one-sided. Future episodes promise to tweak the formula a little further – including at least one match from recent history that’ll probably stir up more trouble, and a silly-sounding final episode that uses fictional combatants for the first time. Charlie Brooker is wrong – you can watch Deadliest Warrior and still enjoy Civilisation, trust me.