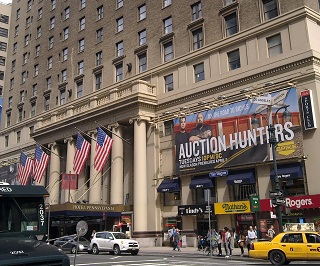 The alarm bells should have gone off when we arrived at New York Newark Airport on the Tuesday before the wedding, only to see Piers Morgan’s gurning criminal face leering at us from all the monitors in Homeland Security. They were tuned to CNN, and Morgan was boasting that they’d have the best coverage of the event, “starting at 4am Eastern on Friday.” It looked like our best course of action for avoiding the wedding was to take advantage of our current timezone and simply be in bed all the way through it. All we needed to do was somehow keep out of the way of the buildup, but that was already proving to be easier said than done.

Once we’d worked out the arrangement with the AirTrain from Newark Airport and its connection to the NJ Transit service, we were at Penn Station in no time, with the delightful sight of the Hotel Pennsylvania literally over the road. The Hotel Penn is famous for two things: it has the most famous phone number on the planet, and it provides dirt cheap accommodation right in the centre of the Big Apple, allowing them to style themselves as The World’s Most Popular Hotel. But trawl the web for reviews and you’ll find all sorts of horror stories about bedbugs, cockroaches, and fresh brain spatter on bedroom walls. It’s a cheap hotel that’s obviously seen better days, sure, but we found it to be lived-in rather than actually squalid.

The building’s currently under threat of demolition, and you suspect that there’s a stratum of society that’s enraged at the idea of a piece of prime NY real estate being used by thousands of happy tourists daily, when it could be yet another symbolic penis for a corporation or two. Stuff the begrudgers: if you’ve ever travelled on a New York subway rather than pay for a cab, you have no business complaining about the cleanliness of the Penn. Having said that, we thought we saw a cockroach running around the ground floor coffee shop, although that might just have been the afterimage of Piers Morgan still burned onto our retinas. 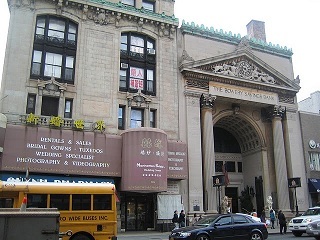 So: four full days in New York. What to do? Well, unusually for us, shopping was high on the list of priorities this time. Our requirements were simple: I wanted a jacket, and The BBG wanted an entire wardrobe. As I mentioned last year when we were in Tokyo, her clothes retailer of choice is Talbots, specifically their petites range: but they closed all their UK shops in 2008, and since then she’s been reduced to bulk-buying whenever we visit a country they haven’t pulled out of yet. Talbots has four branches in New York alone, and she walked out of the Madison Avenue branch with a huge smile on her face and blood pouring out of the chip on her credit card.

Small women like The BBG are lucky: there aren’t really specialist stores for normalish-sized-blokes-with-a-bit-of-a-beer-gut, so we took the opportunity to look around the big department stores to see what they had to offer. Saks turned out to be a mistake: when we saw one jacket selling for $5000, we ran out of the store giggling and screaming simultaneously. Macy's, on the other hand, did us proud - they were in the middle of a sale, so there was plenty of stock going at reasonable prices. I ended up buying a whole suit: a $400 Sean John affair that had been whittled down by a bewildering series of discounts to a measly seventy-five bucks. Sean John is, of course, P Diddy’s clothing label, and on close examination the suit turned out to be made up of bits of half a dozen other people’s suits held together with shouting.

Our clothes shopping was wildly successful, then: our other shopping, less so. I obviously didn’t spot the warning signs when we were in Shanghai two years ago, and found it virtually impossible to buy local CDs. I’ve had similar experiences in other cities since, and now it’s the turn of New York to shock me into this realisation: there is no longer a market for shops that sell any material that can be easily downloaded or bought off the internet. Okay, we happened to be staying across the road from one of the few bookshops apparently still standing – the Madison Square Garden branch of Borders, although even that’s met its doom since we were there – and I picked up a few bits of light reading from Tina Fey, Stephen Colbert and the Bureau Chiefs. (I feel guilty about putting Amazon links for them below, in the circumstances.)

But trying to get CDs and DVDs? Fuggedaboutit. And given that I’ve spent the last two decades of my life picking up my travel souvenirs from music and video shops, this is all rather terrifying. Thankfully, we still have one remaining branch of Kim’s Video in the Village. It’s always been the place to go for weird records and DVDs, but it appears that in the age of the download they’ve had to shut up shop like Virgin, HMV and Tower before them, and compress their business into smaller premises. Those smaller premises are still an Aladdin’s Cave of delights, though, particularly their huge range of foreign and cult DVDs. The cultiest thing I bought at Kim’s was the DVD of an animation I reviewed here two years ago: but The BBG outculted me with a box set of the Maiku Hama Trilogy, three films about Japan’s coolest private eye (mentioned here in passing during LFF 1994). 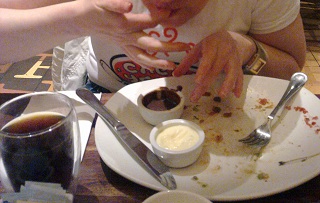 And speaking of The Belated Birthday Girl, here’s her roundup of what we ate this time.

All our breakfasts were excellent, all filling you too much to have two more meals in the day - which we nonetheless did. I would heartily recommend the following:

Lunch had to be relatively light, given the hearty breakfasts…

And as we've still got loads more New York stuff to tell you about - including, obviously, what we had for dinner - you'll have to go to Part Two and read the rest of it there.

(Here's an email I received relating to this article: probably worth passing on, I thought.)

I am a representative of the Save Hotel Pennsylvania Foundation. I read your article "Kill And Wait: A Royal Wedding Holiday in New York". I was wondering if you would like to stay in the loop of the preservation of Hotel Pennsylvania. Our goal is simple. We are trying to prevent the demolition of the hotel. If you would like, you can visit our website at http://www.savehotelpenn.org or go to our Facebook page at http://www.facebook.com/savehotelpenn. If you would like to help with our efforts please contact us either via email or on our Facebook page. Together we can help save this historic hotel.

Thanks for your support!

So cute! I already like you on FB and also get your posts on Google Reader. :)