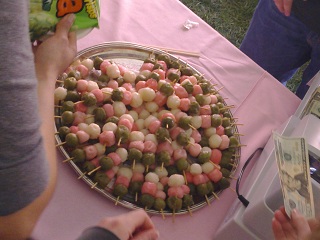 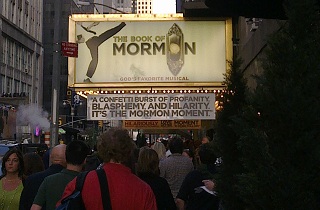 [Shit, I've only just discovered on the website that Klee has closed down since we were there. Sorry about that, love.]

I’m a creature of predictable habits, it would appear. In the weeks leading up to our New York trip, the one question people kept asking me was “so, are you seeing The Book Of Mormon?” Of course we bloody were. We actually booked our tickets back in January, well before its first preview: and that was a hell of a risk, when you think about it. Spider-Man: Turn Off The Dark was in the middle of its gigantic crash and burn of a preview run: just because the guys from South Park had written a Broadway musical, that was no guarantee it’d be any good, or even a guarantee that it’d still be running by the end of April.

How wrong can you be? As everyone knows by now, Trey Parker, Matt Stone and Robert Lopez have written a cast-iron Broadway hit, with 9 Tonys in the bag and sellout performances months into the future. (Useful tip: the Eugene O’Neill Theater is surprisingly intimate. Go for the cheapest seats at the back of the top level, and you’ll still have a perfectly excellent view.) Beyond the basic plot – two trainee Mormon missionaries are sent to darkest Africa, with hilarious consequences – there’s not much that can be said about what makes The Book Of Mormon so great. We knew the people involved could write pitch-perfect Broadway pastiches: we knew they’d have a suitably dark, unsentimental view of the current situation in Africa: and we knew that, as they often do in South Park, they’d find some way in the end of having their cake and eating it. It’s all stuff they’ve done before, but now they’re doing it all at the same time, live on stage, several times a week. See it when the inevitable London run happens: you will believe.

In other cultural news, it seemed like a happy coincidence that our visit overlapped neatly with the Tribeca Film Festival. In the end, though, there was only one film in the programme we could fit in, and even that one had to be a midnight show. Sint is a horror movie by Dutch schlockmeister Dick Maas, the man behind 1980s video unpleasanties like Amsterdamned and The Lift. This one is about that time that comes round every 33 years or so when St Nicolas goes on a killing spree, like he does. We’ve already had another European killer Santa movie in the last year, though: and Rare Exports was more interesting because it tried to create a mythology out of its silly story, whereas Sint is just a daft serial killer movie in a Father Christmas suit, admittedly made with Maas’ usual eye for gruesome black comedy.

(Outside of Tribeca, our other film outing was to the IFC Center to rewatch 13 Assassins as research for our Mostly Film piece. The IFC has a rather wonderful programme, the sort of eclectic rep cinema that London used to be full of but apparently can’t support any more. The lack of a café is deplorable, however.)

Our previous visit to New York included a visit to Brooklyn to catch some English theatre on tour, and it was the same this time. We were at Brooklyn Academy of Music because we missed out on the chance to see BBG favourite Derek Jacobi when his triumphant King Lear sold out its London run within seconds, and were delighted to discover that the play’s New York run didn’t sell out quite as quickly. It’s the latest in Jacobi’s series of collaborations with director Michael Grandage, and possibly the last: it’s hard to see how they can top this definitive reading of the play, performed with virtually no props on a distressed, white painted bare stage. Jacobi is in magnificent form, getting the King’s slow decline just right. We saw Greg Hicks play Lear for the RSC a few months earlier, and he could do the power but couldn’t quite pull off the fragility. Jacobi does it all. 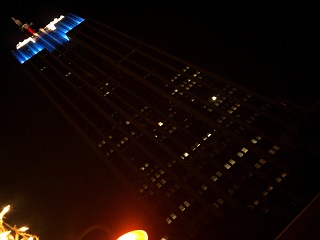 All our previous visits to New York have included a cultural meetup with our Philadelphia correspondent Carole, and this one was no exception. Starting with the aforementioned lunch at Katz’s Deli, we headed from there to the Lower East Side Tenement Museum, which we’d actually talked about doing last time we all met up but rejected in favour of Moscow Cats Theater. The museum is much, much better. There are several tenement buildings in the area with centuries of New York history behind them: the museum has kept a couple of them in their original state, and hosts regular guided tours of them. Our tour that day was The Moores, looking at the various perils a young Irish family would have faced in this block: overcrowding, poor sanitation, tainted milk on sale in the streets, and that’s before you factor in the racism. It was led by an enthusiastic and informed member of the museum staff, styled as an ‘educator’ rather than a ‘guide’: if he has a catchphrase throughout the tour, it’s “that’s a good question,” but he always has good answers for them too.

If this is the sightseeing section of the article, then let’s look at a sight which wasn’t available to see when we last visited: the New York High Line, the paved-over overhead railway that’s now an elevated park looking down on the city streets. We were actually fooled by The BBG’s newly-purchased Not For Tourists guide, which claimed the park was open from 32nd Street on down – that’s certainly the case now, but back in April 2011 it was only running south of 20th Street. Still, it’s a lovely peaceful atmosphere even on a sunny Saturday lunchtime, and it made for a relaxing spot where The BBG and I could sit down for half an hour and dictate what would eventually become our Miike piece for Mostly Film.

We couldn’t stay much longer than that, because my plan for the day was to spend as much time inside the BBG as possible. It was a plan she thoroughly approved of, too. Brooklyn Botanic Garden is a lovely park area at the best of times, but in that day’s temperatures (sunny but not insanely hot) and with a two day Japanese festival taking place, it was even better. The place was rammed as a result, with giant queues for tickets, which made us feel very smug when we just swanned in the gate with our pre-booked print-at-home tickets.

Sakura Matsuri is primarily a celebration of the Garden’s cherry blossom trees coming into bloom, something they celebrate to a similar degree back in Japan. There, it’s used as an excuse for boozy open-air picnics: but in Brooklyn, it’s the springboard for a huge range of Japan-related events - a cosplay parade, food stalls, Japanese music, martial arts displays, a book signing by the man who invented Sudoku, and so much more. We were a bit worried initially that the main tent was far too crowded to be able to see anything on stage, but once they’d persuaded everyone to sit down it was much easier to see, and our view of the cosplay parade was good enough for me to be able to do this.

But I’d like to wrap this up with one of those little New York secrets: pay attention and take notes. Pick yourself a decent late night slot – we managed to pull this off after midnight on the Friday night of the royal wedding itself, but other times may work out a little easier for you. Go to Koreatown, specifically to the La Quinta Inn on West 32nd St. Walk into it like you own the place, and take the incredibly slow lift to the top floor. Go into the tiny Mé Bar and buy a drink (we still approve of the Brooklyn Lager). Walk out onto the terrace. Look up. You’re in a rooftop bar right in the centre of New York, next door to the sodding Empire State Building (see picture above), and you didn’t need to argue with door staff or anything.

And if you’re really lucky like we were, on the way home you may get to see two girls having a thermonuclear yelling match in the street (“I will lay you the FUCK out RIGHT NOW”), to the amusement of several guys standing watching from a safe distance. I’d like to imagine that Kate Middleton’s hen party was exactly like this. Being a monkey, and all.