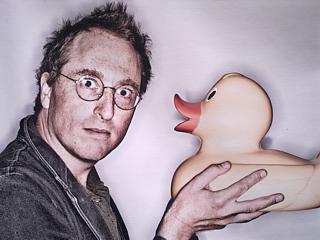 The final day of the Festival is always a tricky one, and not just in that hurry-up-the-flats-throw-us-out-at-ten-give-me-the-keys-get-out-get-out-NOW way that the Pals have come to expect. We're out on the streets at 10am, but most of us are travelling back to London on a train that doesn't leave Edinburgh until 5.30pm. What to do? Particularly when most of the comedy shows that you'd use to quickly fill a gap tend to only start in the early evening?

Well, The Belated Birthday Girl and I manage to pull off a few things - including two of the best bits of theatre I've seen all week - but the first one is kind of an accident. Having walked across town to pick up tickets for our shows later in the day, we're virtually at Charlotte Square, so we stop off at the Book Festival complex for a coffee. Our previous visit was a flying one on Wednesday, and we realised then that there was an interesting exhibition taking place around the Festival: today, we decide to give it a bit of quality time.

Chris Close has been the official photographer of the Book Festival since 2009, and he's working to a very simple brief: whenever a writer turns up to do a talk at the festival, take their portrait, print it off onto canvas, and have it on display in the festival complex within a day. Between The Lines 2011 is the exhibition of these portraits, which has been growing day by day as the festival's progressed: as we're now just two days away from its end, this has grown into a rather large collection of pictures.

Close's style is a very distinctive one: high in contrast, with an almost supernatural level of detail. When Nell Nelson yells directly into the camera for her portrait, you can virtually see what she's had for lunch. Generally, Close encourages his subjects to act up for the pictures, and the results can be a lot of fun, as in when Neil Gaiman and Audrey Niffenegger take on the traditional Dambusters pose for reasons best known to themselves.

As some of Close's 2009 and 2010 portraits also randomly appear in the lineup, it's interesting to see how his style has become even more contrasty as time has progressed. Most recently, he's added additional levels of stylisation to the portraits, with Steve Bell half-obscured by a sketch of the other half of his face, and Ian Rankin ripping his way out of one of his own pages. Whatever he does to his subjects, he's always careful to ensure that their personality bursts out of the image. Some of these pictures may be viewable on the web, but they're much more impressive reproduced at the size we see them here. Lunch at Holyrood 9A, which I remember when it used to be a seedy Goth pub called the Holyrood Tavern - now it's all posh and gastro-y with veggie haggis burgers and PRAISE THE LORD BrewDog on tap. It's ideally placed for a quick run to the Pleasance for the play Snap. Catch. Slam., which we caught a glimpse of at Mervyn Stutter last Sunday.

Written by Emma Jowett, it's a collection of three short plays, each one capturing a turning point in the lives of their protagonists. The teacher in Snap, driven to despair by an unruly pupil: the man in Catch, propelled from his usual Sunday morning comfort zone into a life-or-death situation: the housewife in Slam, waiting for her daughter to come home, not suspecting how long she may have to wait.

I think all of us who saw the extract from Catch at Sunday's Stutter were blown away by it: seeing the whole of Catch now lets you appreciate how brilliantly they cut it for a five minute slot. It was obvious that they'd picked the most unbearable cliffhanger moment to end it on. But what comes across in the full version is how they also lost a large part of the prologue, where the man describes what his life used to be like: which chimes beautifully with what happens at the end. The other stories are similar masterpieces of narrative construction - in particular, Slam, which was beautifully described at Stutter as being "like a German sentence: you don't really know what it's about until you get to the end of it."

The cast of five - Shian Denovan, Gareth Kieran Jones, Teresa Jennings, Jacek Wytrzymaly and Hannah Anderson - act their socks off. Ben Caplan directs superbly, building to a peak of unbearable tension, and then doing it again, and then doing it again. The resulting production should be knee-deep in awards. Why isn't it? You Fringe-award-handing-out bastards, you. 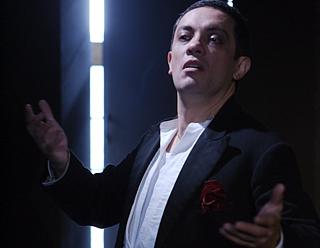 The age-old question: how do you pick what to see at the Fringe? Here's a story. We're in the Traverse Bar after seeing Last Orders on Thursday, and a chap comes up to our table and politely describes a show he's been hired to plug. He isn't hectoring, or aggressive, and he's very sorry for taking up our valuable time but he thinks it's something we would enjoy. Most importantly, his show has a monkey in it. Sold!

The facts are these. In 1906, the legendary tenor Enrico Caruso went on trial in New York, accused of touching the bottom of a woman in the monkey house at Central Park Zoo. Caruso himself, however, claims to be innocent. In Andrew G Marshall's play Caruso And The Monkey House Trial, the audience is placed in the role of the jury at the trial, while Ignacio Jarquin plays the singer, explaining to us how this apparent miscarriage of justice came about, interwoven with the odd aria or two.

It's a neat framework for a cheap one-man show - it uses a minimum of props, the music is performed a capella, and Jarquin pulls off the complex task of impersonating a dozen or so characters as if they were being impersonated by Caruso (and yes, that includes the monkey). He's a compelling narrator (the accent helps), and can pull off the opera sequences with notable skill. The 'trial' aspect of the story may not quite hold up, as we only ever get to hear Caruso's version of the story. But there's no denying that it's a thrilling theatrical moment when the lights go up and we all get to vote on whether we believe him or not. (And, if the vote turns out like today's does, you can feel the palpable contempt from the audience directed at the two people who voted the opposite way from everyone else in the room. No, it wasn't us.)

Caruso's verdict marks our last show of Edinburgh 2011. Within an hour, we're on the train back to London, slowly emerging out of that Festival bubble and just starting to realise what's happened to Colonel Gaddafi, Steve Jobs and Naoto Kan while we've been otherwise occupied. Overall, I think this counts as a very good Edinburgh: there was a stretch there on Tuesday, where Bridget Christie ran into The North Sea Scrolls and eventually into Political Animal, which was pure gold.

And, as I'm sure The Belated Birthday Girl will point out when Spank's Pals' Postscript appears online shortly, it was a pretty impressive festival for food and drink as well. 2012 is going to be one of my traditional staying-away-from-Edinburgh years, but I think I'll need to investigate bringing BrewDog on board as a sponsor for 2013. Being a monkey, and all.