More from Spank's Pals on their experiences at Edinburgh Festival 2011. You can read Part One here.

Being the first of two collections of reviews from some of the lovely people who attended Edinburgh Festival 2011 with me. You can read Part Two here. 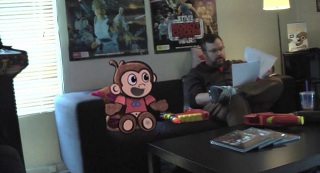 Books: In one of those classic coals-to-Newcastle deals that I frequently pull off while I'm out of the country, I was in Austin International Airport a few months ago looking to get rid of my last few bucks before leaving the US. And the only thing I could find in the shops that fit the bill was the paperback of Keith Richards' autobiography, Life. So I brought it all the way back to the UK, only to find that the British paperback is smaller and much more manageable. Never mind, it's an entertaining read. How much of it is Keef and how much is ghost writer James Fox is debatable, but doesn't really matter: between them, they've come up with a literary voice for Richards' stories that feels precisely right. What surprised me is how it's not just about the stories of rock 'n' roll excess, it's about the music too, with Richards getting into just enough technical detail about how he's developed his sound over five decades. You find yourself listening to Rolling Stones records in an entirely different way after reading Life.

Comedy: The big anecdote to come out of this year's Edinburgh trip, in my opinion, has to be The Belated Birthday Girl's triumphant competition win at Richard Herring's Edinburgh Fringe Podcast. It's made all the more amusing by one of the prizes being Herring's new DVD, As It Occurs To Me: The Complete Cumpkin... which I bought more or less on the day of release, meaning that our household now has two copies of a disk whose contents can be largely downloaded off the internet for nothing. Nevertheless, it's a rather fine package, produced with their usual care by the good people at Go Faster Stripe. You get all the episodes of Herring's seat-of-the-pants comedy podcast, plus two series worth of the warm-up sets he did before the shows, plus video of one complete show, plus PDFs of all the scripts. That's thirty-five and a half hours of audio (plus the other stuff) for a mere fifteen quid. There's no denying that AIOTM (aiotm) could be patchy - in fact, it positively revelled in its patchiness - but when it works, there's very little like it. Come to think of it, you could say the same about when it doesn't work, too.

Music: It's been out in Japan since the middle of July, but shipping delays and a general nervousness about just how much Japanese CDs cost nowadays mean that I only picked up a copy of Vanilla Beans II in August. It's actually the third album by the J-Pop duo that we first caught in Tokyo last year (they've released a greatest hits compilation in the interim, if that makes sense). It's a record as strange as their deadpan fan message videos, featuring a lead single with a Swedish title (älskar dig), a series of short jingles that consist of them just singing the band's name, and a totally straight cover of Stairway To Heaven. They're confusing me. I like that.