Being the first of two collections of reviews from some of the lovely people who attended Edinburgh Festival 2011 with me. You can read Part Two here. 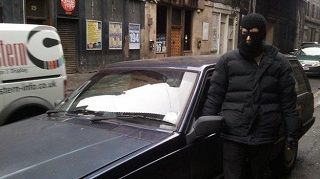 Why was our fave monkey unable to buy The Scotsman at KingsX? Answer: they have stopped distributing the paper outside Scotland, so I was unable to read the reviews like I usually do for the first 2 weeks of the fest. But by pure chance I happened to be seated opposite Rhian and Tomas on the train and they had loads of ideas for shows, there is even an official Android App this year where I can note all these down. But finding slots for all the shows meant we didn’t meet up again for drinkies until Friday, and never caught up with our fave monkey and The BBG all week, even when they were hanging out at the BrewDog pub.

So to the shows; top billing goes to the fabulous You Once Said Yes a one to one interactive show, keep saying “Yes” and the experiences come thick and fast, the show takes you so far out of your comfort zone that the brain is unsure at times if you are in some kind of dream state or having a virtual experience, I was a babbling wreck at the end of this show. But there were also some richly rewarding contemplative experiences amongst the more visceral heart thumping experiences. Being shown around St Giles cathedral by a waitress in her break or having a cup of tea with the gardener in Greyfriars churchyard were both touching, before you were thrust back into the melee of having to deal with the likes of a female vamp haranguing you underneath the head of the purple cow at the Udderbelly, for not returning her calls (everytime I tried to answer her calls the phone stopped).

I eventually had to say “No” to get to another show which coincidentally came in second on my list, The Strange Undoing of Prudencia Hart. I think it fair to say this show was aimed at the older audience, it was staged in the Ghille Dru, a neo gothic church converted into a pub, which this production exploited to the full. Several of the scenes took place on the very table we were seated at, which with a drink in hand was a thrilling way to spend an afternoon. The actors, all accomplished folk musicans, were playing on our arrival before we delved into the adventures of the sexy Prudencia Hart, a blue stocking academic having a fling with her fellow academic Colin, at a conference. The show was sponsored by a whisky company, so we had free whisky and sandwiches at the interval, which undoubtedly influenced my choosing this show.

Third on my list goes to Jus' Like That, the Tommy Cooper tribute show, a loving recreation of some of his best known stage routines. It was brought to life by a consummate performance by Clive Mantle, and a far cry from the tawdry TV specials and compilation shows that are rolled out on no budget TV. This really got to the heart of what made Tommy Cooper such a great comedian and as close as anyone is ever likely to get to paying homage to a near genius.

And finally (big sigh of relief from our fave monkey), a little gripe about the visual arts this year. From a paucity of shows, Tony Cragg had the biggest one man show but in my opinion will be consigned to the footnotes of art history. A bit of a one trick pony, his show (it must have been a lean year he won the Turner prize) had little that was new or original. It was left to the little gem that is Inverleith House in the Botanic Gardens to showcase some works by Robert Rauschenberg, before a major retrospective of his work at Tate Modern in 2014. The sculpture he fashioned from urban arcana has a choreographic quality and a vitality of movement, that was totally lacking in the Cragg show.

Well I could go on, but just to say this was the best Edinburgh for many a year. I still had a list of shows I wanted to see by the final day (not always the case), the new accommodation worked out brilliantly (we will be back there next year) and the sun shone most of the week. A big thanks to our fave monkey for not only organising the trip but also keeping us posted with hard copies of his blog, which came in very handy for entertainment when we had a several hour delay at the airport on our return journey (we are coming back by train next year!). 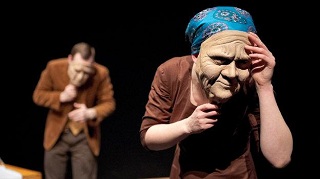 I thought I'd use this space to talk about a show which I don't think anyone has mentioned yet – Theatre Ad Infinitum's Translunar Paradise. Rhian and I went to see this following a mid-week booking frenzy, and by the time we got to the venue we couldn't remember why we had booked it, or what it was. Fortunately it turned out to be a brilliant piece of physical theatre.

The show told a love story across several time periods. We see a couple in old age, and in the youthful early days of their relationship. The show weaved between these different eras in a mixture of flashbacks and dream sequences. The story was told without words, through a combination of dance and mime. A third performer was on-stage providing a musical accompaniment, while simultaneously moving around and rearranging the small number of physical props needed by the other performers. All of this was done with a fairly mesmerising level of grace.

To my untrained eyes, the performances seemed flawless - there was never an inelegant moment during the hour, and the story came across as clear as could be. There was gentle humour and sadness throughout, and the expected emotional wallop was highly effective.

The show's best visual trick was the characters' transitions between their old and young variations. It was simple, but appeared almost magical in practice - I won't ruin it here with a description. That key presentational trick also gave rise to the handful of lovely visual metaphors which lingered in my mind afterwards, and probably represent the heart of the show.

I should probably point out that I don't know very much about dance or physical theatre. Anyone with more experience of this type of show would probably find more to criticise. It did it for me, though – and judging from the number of standing ovations, it appeared to do it for the packed audience in the Pleasance King Dome.

(A word of warning, however, for anyone who gets the chance to see it – make sure you get a good seat. As an almost entirely visual show, having half of your view blocked by someone's head is seriously frustrating. The bad view I had in the venue prevented this from being the surprise highlight of the week.)

Some other things I enjoyed during the week:

Dave Gorman's Powerpoint Presentation, which seemed to make an hour pass in about 20 minutes.

Russell Kane's hour of startlingly personal comedy. (I'm already eager to see next year's show, to find out how he survives his current set of personal crises.)

Daniel Kitson's explosive reaction to a cup of tea which had inadvertently been dosed with salt instead of sugar at the Forest Fringe.“Shit the bed!” (Kitson was performing his show Stories for the Starlit Sky as a benefit gig for the Forest Fringe. The quality of the show was predictably good - although the chaotic Forest venue wasn't really ideal for a show which requires focussed listening. The timing of the show was also slightly bonkers – we surrendered to knackeredness at 3.10 am, with one story left to be told.)

I think that'll do. Many thanks to Spank, as always, for organizing our week. 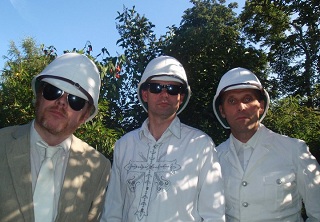 This year's Edinburgh was very good, but there was nothing which blew me away quite the way It’s Always Right Now Until It’s Later did last year. The nearest would be The North Sea Scrolls, with its combination of witty text and terrific music, and especially the wonderful sound of the mighty Cathal Coughlan's voice (I've been a fan ever since the Microdisney days).

Aside from that, the stand-outs were the very moving Snap. Catch. Slam, and the sense of being at a unique happening that was the Oliver-Zaltzman reunion of Political Animal. I was also impressed by Wireless Mystery Theatre Presents. Best stand-up would probably go to Phill Jupitus, with an honourable mention for Bridget Christie. While Dave Gorman was predictably good, it never quite got to the heights of the Googlewhack Adventure - although I enjoyed how, as with that earlier show, there was a little secret something shared with the audience, and I hope no-one buggers things up by blowing the secret in public.

On the negatives, Tony Bournemouth was dreadful (knowing you're not funny isn't enough to make that fact funny), and What Remains was really not for me (and I think I only chose it out of a mistaken assumption about what "Remains" referred to). Apart from that, Robin Ince was responsible for disappointing me twice: first time, because I didn't get to see him (his science show Carl Sagan Is My God), and second time because I did see him (Pointless Anger), and it didn't really live up to expectations. Still, I remain a fan, and look forward to more Godless Lessons later this year.

When it came to food, I did have an out-and-out winner this year, and that was the Market Menu at No 12 Picardy Place: really top class food, and astonishing value at £20 for 3 courses. Apart from that, the main new discoveries were sibling restaurants Red Squirrel and Holyrood 9A, which both provided top quality pub pood and a great range of beers. And talking of beer, BrewDog - most especially 5am Saint - is now amongst my favourite beers.