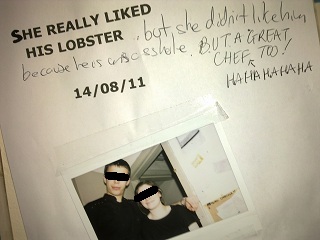 More from Spank's Pals on their experiences at Edinburgh Festival 2011. You can read Part One here. 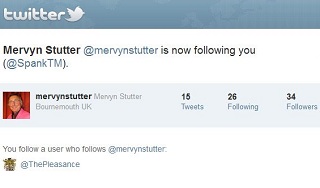 Edinburgh seems a long time ago now, but I've been busy working and theatregoing here in London since my return (try and see The Faith Machine at the Royal Court!), so am just sitting down to write my reviews.

As usual, I had a great time in Edinburgh, but for me it was not a vintage year show wise, which is possibly due to a few wrong choices - Fresher! The Musical and The Pajama Men to name two. I went to these on the strength of good reviews. They obviously appealed to all the younger members of the audience but as I sadly no longer fit into this category these two shows went totally over my head. However there were some highlights, so here are my top shows.

1. Snap. Catch. Slam.
I spotted this one in the Fringe programme as it was written by Emma Jowett, one of the writers responsible for Analogue's brilliant Mile End a couple of years ago. But it was the extract from Catch performed at Mervyn Stutter's Pick of the Fringe that persuaded me that this was a "must see". Simply staged with five actors sitting on chairs on three patches of carpet, Jowett's stunning drama consists of three stories where the main protagonists tell of life changing events.

We meet a teacher who is provoked into attacking a bullying pupil, a cockney lad who becomes an unlikely hero while going to buy the Sunday papers, and a mother awaiting the return of her daughter from a play date. Each story is built up to a crescendo and two of the tales have an unexpected twist at the end. The compelling performances were all excellent but I'd single out Shian Denovan as the schoolteacher as the most memorable. She was nominated for The Stage's Best Actress at the Festival Award and, although she didn't win, is definitely one to watch.

2. Futureproof
The idea of a play set in a Victorian freak show didn't appeal to many of our group members so maybe it says something about my twisted mind that the theme was one of the main reasons that I was attracted to Futureproof. Some of the Edinburgh drama seems a little formulaic in that there are certain themes that keep recurring, so it was good so see Lynda Radley selecting this novel setting for her play at the Traverse. Radley introduces us to an interesting selection of characters who perform in Riley's travelling sideshow - the "fattest man in the world", the conjoined twins, a bearded lady, a hermaphrodite and a "living mermaid".

We soon learn that Victorian tastes are changing, and in order to survive the acts must transform: so the fat man slims, the bearded lady shaves and, tragically, the conjoined twins are separated. Radley demonstrates how the changes effect each character, and in telling this story she is helped by some high quality performances. I was particularly taken with Lesley Hart as George/Georgina, the hermaphrodite who doesn't like what the changes are doing to her colleagues and to her once respected boss Riley. The ending of the play was satisfying, with George/Georgina deciding to go her own way and not follow the crowd.

At the Traverse they sell you a programme which contains a script, and I always find it interesting to read the script to discover if any changes have been made in production. I was interested to see that the ending where George/Georgina changes from her Victorian clothes to modern day jeans and feminine top accompanied by the strains of Chrissie Hynde's Brass in Pocket was obviously a directorial addition, but this really made a strong point about how this character would be accepted today and not treated as a freak. This added to Lynda Radley's strong message about integrity winning over greed and self interest.

Futureproof reminded me how good the quality of acting and production at the Traverse can be. I will definitely get my act together and pre book more Traverse shows next year.

These two shows were the best by far, but I also enjoyed Dave Gorman's PowerPoint Presentation (not as good as the Googlewhack Adventure but still extremely entertaining) , the ever reliable Fascinating Aida's Cheap Flights (soon to be seen at the Charing Cross Theatre in London), Allotment (a play set on an allotment), Soy de Cuba, and the energetic music of the Jive Aces. The Jive Aces' show was made more entertaining by some excellent 1950s tribute dancers in the audience, all dressed up in the clothes of the period.

I'll sign off with a special mention for Mervyn Stutter, celebrating the 20th year of his Pick of the Fringe show. Visitors to the festival could do a lot worse than attending this excellent compilation show on a daily basis. The acts vary each day and are usually of a high calibre. Mervyn's banter and warm rapport with audience and performers makes him the perfect host. 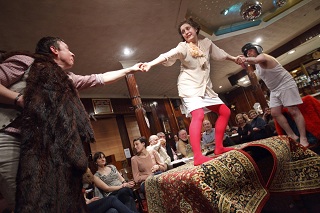 This year, my highlight was The Strange Undoing of Prudencia Hart at the Traverse Ghillie Dou on which Nick has already commented. It was certainly exciting to have the action taking place all around the pub (and, at one point, literally on the table at which we were sitting). I found the play vivid and engaging, and while it was anarchic and at times almost farcical, it sustained real warmth and feeling throughout. This was helped by the talented cast who showed their abilities as both actors and folk musicians, with Madeleine Worrall outstanding in the title role.

I also saw several other enjoyable plays, including The Dark Philosophers and I, Malvolio (both at the Traverse), and Rose at the Pleasance Courtyard (the latter a touching portrayal of a difficult father-daughter relationship that was sensitively performed by the real life father and daughter duo of Art and Keira Malik).

Once again, Charlotte Square Gardens provided the setting for some interesting events at the Book Festival. I went to hear Roy Hattersley for a second successive year, this time to talk about his new biography of Lloyd George — he spoke fluently for 40 minutes without notes, and answered questions with equal facility. At an equally well-attended event, Carol Ann Duffy read a selection from her poems, including extracts from her latest collection (unpublished at the time of writing), The Bees. However, the poem I enjoyed most was Mrs Midas, in which the good lady had to deal with the domestic consequences of her husband turning everything he touched to gold.

In one of those strange juxtapositions that makes Edinburgh a unique festival experience, I had to rush from Carol Anne Duffy’s event to the extra show performed by Fascinating Aida at the Pleasance Grand. It was the first time I had seen this trio (consisting of Dillie Keane, Adele Anderson and new recruit Sarah Louise Young). The show, part of the group’s Cheap Flights Tour, was wonderfully performed and the title song (in which, unsurprisingly, the flights turn out not to be so cheap after all) did not disappoint.

Of the three events I went to in the International Festival, the most enjoyable was the concert by the Scottish Chamber Orchestra at the Usher Hall, in which the main work was the Requiem by the French composer Maurice Duruflé. Composed in 1947, it was inspired by the better-known Requiem composed by Gabriel Fauré half a century earlier, but it is a much more modern setting. I had not heard the work before, but the wonderful singing by the National Youth Choir of Scotland and soloists Sophie Koch and Simon Keenleyside (together with some fine orchestral playing) brought out its power and lyricism. I also enjoyed the opening piece, Ravel’s Le Tombeau de Couperin.

Finally, many thanks to Spank for organising another enjoyable week in Edinburgh. 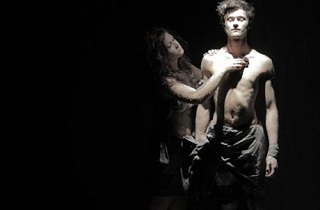 Back in (reasonably) sunny Bristol, time for reflection on my 17th trip to the Edinburgh Fringe in not that many more years. As Eve and I drew up outside our new accommodation in the trusty Musemobile (aptly named by Spank), the sun was shining, Arthur’s Seat loomed behind us, and this heralded the start of one of the best Festival weeks I can remember. The accommodation was great, and despite its proximity to a major Fringe venue was surprisingly quiet (thanks to the wonders of double-glazing). We were even treated to a light show from our kitchen window most nights.

The choice of the shows I saw was generally excellent, and even the weather stayed mainly kind to us. It was reassuring to see in particular this year such a wide range and high standard of theatre which, in recent years, I’ve moaned seemed to be taking second place to comedy. In fact, quite a bit of what I saw could have, in previous years, ranked among my “best of the Festival”. I wouldn’t say there was one stand-out show for me this year, but the following deserve particular mention:

... and talking of comics, a few words in praise of Andy Parsons, who concluded an excellent week on Friday evening (prior to what proved to be the restaurant discovery of the week – Namaste Kathmandu in Forrest Road) . I acknowledge I’m no expert on the comedy scene, and know there is a lot of comic talent out there I never experience; however I feel some of them can get a bit complacent, and rely on the goodwill of well-oiled punters. Andy Parsons still remains one of my favourites because:

The Saturday night jinx hasn’t completely gone away, since our first show, Bob Downe, who we thought would be a sure-fire winner, didn’t really live up to expectations this time (although he didn’t quite sink to the depths of our friends Frisky and Mannish last year). Oh well, not everything can go perfectly.

The only gap I felt this year was the lack of any real must-see art exhibitions, although this was redressed by what seemed a rather well-kept secret: an excellent Robert Rauschenburg show at the Inverleith House (Botanical Gardens). The building in itself is worth seeing, and was the perfect space for his wonderful creations, many from quite utilitarian objects, old pieces of metal etc.

Thanks once again to Spank for organising – you’ve done a grand job, and enjoy your year off.