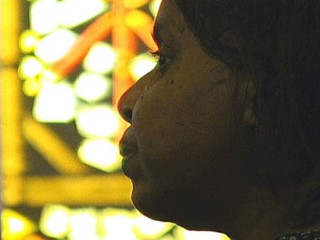 More bloody documentaries. It took me a while to realise that we won't be seeing another proper fictional film until Saturday. In the meantime, we have the new one by Jonathan Demme, playing in the curiously underpopulated Curzon Mayfair. When Demme's not making films like The Silence Of The Lambs or the more recent Rachel Getting Married, he's frequently dabbling in documentary, or at least non-fiction filmmaking: after all, does Stop Making Sense count as a documentary?

You get the impression that films like I'm Carolyn Parker are the sort of thing he does in his spare time, especially when you consider the episodic nature and five-year timespan of this particular example. Although Demme doesn't explicitly join the dots in his opening, you suspect this story all started in January 2006, when a meeting was held at the New Orleans Sheraton to discuss rebuilding plans following the devastation of Hurricane Katrina. Right there on CNN, footage was displayed of a resident of the Lower Ninth ward tearing the committee a new arsehole, articulately noting that her run-down area was being ignored in those plans, and that any attempt to move her out of her home would be "over my dead body." Three months later, Demme went to New Orleans to meet with that resident, Carolyn Parker. He'd be there on and off for the next few years, following the struggle to rebuild her life and that of her community.

If you've been watching Treme on telly, then a lot of Carolyn Parker's story will seem familiar: the hassle to get funding to rebuild, the problems of dealing with bent contractors, the way that certain districts in New Orleans were quietly left to rot after the levees broke. It comes as no surprise to learn that Parker's return to her home ends up taking the best part of four years (with Demme keeping a datestamp on screen throughout just to emphasise that). But through it all, she's a fantastically optimistic character, determined to see this through to the end. That speech she gave at the Sheraton might have been her one day of national glory, but it's just the most visible example of her attitude towards her city. She's not just focussed on her own situation - she's also part of the group working to keep her local Catholic church open, at a time when it looks like the funding will be going towards the other Catholic church in the area, the more affluent, less black one.

It feels like I'm Carolyn Parker is one of those documentaries that came about somewhat by accident: it's shot largely on cheap video, with dodgy sound and an aspect ratio that lurches from 4:3 to 16:9 in the same scene. Demme appears to have been filming Parker for some time before he realised there was a full-length feature to be made about this woman. But he's right - Parker is an inspirational character, and although her story may not be one of huge drama, it's one that's important to her, and one that you suspect is being repeated all over Nola even to this day. The rough and ready look of the film just adds to its urgency, and emphasises that five years on, the problems caused by Katrina are nowhere near being solved. 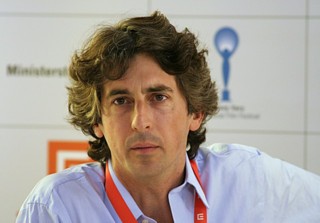 The Screen Talks are always one of the best reasons for being at the LFF. It took me a while to realise that. In the early days, the chance to see the big new movies before everyone else was the thing that drew me to the festival. But I gradually came to realise that there's not all that much benefit in getting an early look at films that'll be getting a regular release just months (or even weeks) later. That's become particularly apparent as the price of the huge gala screenings gets higher from year to year, and you'll notice that I'm giving those a miss this time round. But hour-long on-stage appearances by major names in film? Those aren't going to be happening at your local Cineworld at any time in the foreseeable future, and it's worth catching them here when you can.

Alexander Payne's Screen Talk is a pretty good example of how great these events can be. With just five features under his belt, he's established himself as a rather fine writer and director, making the sorts of human comedies that used to be a staple of the 1970s but are rarely seen now. Mike Goodridge of Screen International is hosting the interview, and finds Payne in an aggressively playful mood, to the extent that you sometimes feel that Goodridge is being picked on. Payne goes through spells of barking out one-word answers to questions that don't particularly interest him ("Sure!" "Yes!" "Good!"), but give him a topic that he's happy to expand on and he'll ramble away in a charming fashion.

Payne's in town with The Descendants, the latest in a series of book adaptations he's worked on, this one starring George Clooney. Payne insists that there isn't a challenge working with stars like Clooney or Jack Nicholson: "he may be filet, but he's still a piece of meat." He talks about the process of adaptation, and writing in general, and how writing his scripts (with or without regular collaborator Jim Taylor) is an important part of making the material his own. His approach as a director of comedies is to honour the characters, while keeping a light touch with them: "I reserve the right to make fun of these people, even when I love them."

From there it's a quick jump back to Payne's early days, and a chronological run through his oeuvre. His career had a charmed beginning - a student graduation film that attracted a huge amount of Hollywood interest, and a deal with Universal where he was given $125,000 to write the script of his choice. But after several years, that script showed no sign of being made, and Payne put it to one side to work on something else that would have a better chance of seeing the inside of a cinema. "An abortion comedy seemed to be an easier sell," he quips: that was his debut, Citizen Ruth. From there it was on to Election, the film that established his name with many people (including me): About Schmidt, where he finally got to use that script he'd been paid a fortune to write a decade earlier: and Sideways, the first real hit of his career. (But he doesn't mention the script doctoring work that Jay Roach let slip during his visit to LFF 2000.)

Payne's very forthcoming about the process he uses to make his films. He talks about the writing, where he and Taylor occupy an office with "one monitor and two keyboards": the importance of editing ("if films are successful, it's because they've taken the time to edit - many don't"): and what he feels his job is as a director. "You have to keep that thick bandwidth of tone... it's like Spanish painting: you start out by painting the canvas black, then put the colours on top." Typically, Screen Talks end with a final film clip, which gives the interviewee a couple of minutes to get out of the building before the audience leave their seats. Payne, however, cheerfully steals a front row seat to watch his contribution to the portmanteau film Paris Je T'Aime, and then spends several minutes chatting to anyone who approaches him. What a nice bloke. I'm still not paying gala prices to watch The Descendants, though. 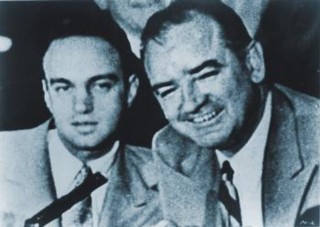 One more documentary to add to the list, and one more Treasure From The Archives too. Although there are some people who'd take issue with both of those statements. UCLA restorer Ross Lipman tells the story in his short but informative introduction. The 1954 Army-McCarthy hearings were a turning point in both American politics and American television: millions watched live as a Senate hearing regarding the special treatment of a soldier escalated into a major scandal that brought down Joe McCarthy's crusade against the Communist infiltration of the US. A decade later, Emile de Antonio and Dan Talbot took almost 200 hours of television coverage and edited it down into a 90 minute movie, with no voiceover narration and no contextualisation other than a couple of on-screen captions. Some people - most notoriously, the New York Film Festival - insisted that just putting 90 minutes of TV on a cinema screen didn't make it a 'real' film. Others thought that the lack of visible editorial interference made it the ultimate example of cinéma-vérité.

But as Lipman points out, of course there was editorial interference: any single cut made to those 200 hours of footage counts as an editorial choice. Talbot and de Antonio were radical filmmakers, and their aim was to present the hearings in a way that reflected their particular point of view. Nowadays, audiences are much more familiar with editing techniques, and you find yourself watching Point Of Order! and wondering where the reaction shots came from. Was that Senator really yawning at exactly the same time as McCarthy was speaking, or did the two events happen weeks apart? Back in 1963, though, people weren't asking those questions, and the fact that these directors were manipulating televised events for their own purposes must have appeared either incomprehensible or terrifying.

The directors weren't just trying to score political points: they were trying to make a piece of entertainment, constructed specifically to fill the screen of the New Yorker arthouse cinema. And Point Of Order! works splendidly on that level too. Everyone involved is aware that the hearings are being televised live, and is playing to the gallery like there's no tomorrow. There are some incredibly funny moments as the two sides bat insults at each other, under the guise of points of order in the proceedings. But there's a lot of unintentional comedy too, as the hearings get bogged down in tiny, surreal details. The colour of the bars in a chart supplied by the army as evidence: the eyelines and framing of a photo featuring two of the key personnel (or is it three?): the sudden appearance of a letter that may or may not be from J Edgar Hoover, and may or may not be too confidential for anyone in the room to read.

In the middle of all this is McCarthy, whose ultimate destruction is the theme - and possibly the purpose - of the film. He's astonishing to watch. If this was a drama, and McCarthy was an actor, you'd be praising the beautifully calibrated nature of his performance: starting out with bluster, self-confidence and a constant grin on his face, and slowly disintegrating as he realises he's on the losing side. The final scene would almost seem like a cliche if it hadn't actually happened: the hearings breaking for recess, with McCarthy still talking as everyone leaves the room, desperately hurling out accusation after accusation in an attempt to save his own skin. It's electrifying stuff, and one of the more unexpected audience-pleasers of this festival.