Apologies to regular readers, but I'm going to explain The Seafood Fallacy again. This is something I discovered several years ago, which only really affects people who go to film festivals far too much. It's the name I gave to the phenomenon of discovering a film in a festival programme, remembering that you've seen an earlier one by the same director, and deciding purely on the basis of that fact that you're going to see the new one. The new film turns out to be shit. Annoyed, you go to your website to look up what you wrote about the director's old film at the time, and you discover that you thought that one was shit too. (References; South Of The Clouds, Zhu Wen, 2004: Seafood, Zhu Wen, 2001.)

I think I've just encountered the first example of Reverse Seafood Fallacy. I've been avoiding the work of Dominik Moll ever since seeing Harry, He's Here To Help at the LFF in 2000. Today, with a couple of programme gaps to fill, it turned out that the most suitable candidate for the afternoon slot was Moll's latest, The Monk. I usually try to avoid holding long-term grudges in Festival circumstances, so I decided to give The Monk a go and found it to be fine. In preparation for this review, I then looked up what I said about Harry to find out why I disliked it so much. Aside from some predictability in the plotting, the main objection I seem to have had in 2000 was that it was getting a general release the following week, which meant I'd paid the monstrous sum of eleven quid to attend the gala screening of a so-so film that I could have seen much cheaper just one week later. (I think it's my outrage at the £11 gala tickets that's most amusing nowadays: they cost £18-£30 this year.)

Anyway, it looks like I've been doing Dominik Moll a terrible disservice for the last eleven years. Sorry about that. His new film, based on the novel by Matthew G. Lewis, stars Vincent Cassel in the title role. Capucin Ambrosio has lived in a monastery all his life, having been abandoned on the steps as an infant. He's grown up to become the monastery's star attraction: his faith is an inspiration to his fellow monks, and people come from miles around to hear his sermons. There wouldn't be a story here unless his faith was tested, and several events conspire to do just that. The arrival of a mysterious new apprentice monk, a series of dreams involving the prayers of a young woman, and the actions of a dirty, dirty nun will combine to bring about his downfall.

Moll announces that this is big, daft, Gothic nonsense from the word go: Ambrosio's arrival at the monastery is heralded with a huge thunderstorm, flashes of lightning illuminating the gargoyles in a theoretically terrifying fashion. Once Moll's set the tone, he keeps it at the same hysterical level throughout, and we can just relax and enjoy Ambrosio's torment from a distance. Despite all of Cassel's best efforts, we never really connect emotionally with Ambrosio, and most of the rest of the cast are just ciphers at the mercy of the plot (apart from a small but entertaining cameo from Harry himself, Sergi López). But that plot is entertaining enough to keep you watching throughout, along with some lovely cinematography from Patrick Blossier which draws the maximum level of contrast between the shadows of the monastery and the blazing sun of the Spanish desert outside it. 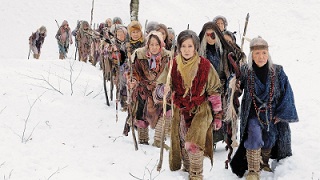 I really need to spend some time with Shohei Imamura's back catalogue. To date, I've only seen three films of his, but they've gradually persuaded me that he's one of the greats of Japanese cinema. The first was Black Rain - no, not that one - which The Belated Birthday Girl and I were drawn to because of its connection with LFF regular Takashi Miike (who was Imamura's assistant on this story of Hiroshima after the bomb). A couple of years ago, The Pornographers was one of the highlights of BFI Southbank's notorious Japanese Filth season. And last month, we caught up with his 1983 classic The Ballad Of Narayama, which knocked me flat with its brilliance. Part of our reason for seeing it was in preparation for Dendera, which is a sort of sequel directed by Imamura's son, Daisuke Tengan. (Just to tie everything up in a neat bow, Tengan hasn't just directed his own films like Aiki, he's also worked as a screenwriter for Miike on Audition and 13 Assassins.)

Yuya Sato's source novel isn't really a sequel to Narayama, it's more of a re-imagining that turns it into a septuagenarian Logan's Run. It starts off from the same basic premise: a small village where anyone who reaches the age of seventy is considered a drain on resources, so they're taken up to the top of a mountain and left to die. When Kayu (Ruriko Asaoka) wakes up after being dumped on the mountaintop, and sees her old dead friends from the village, she assumes she's in heaven. But she's not: she's in Dendera, a small community of abandoned old women that has been secretly built over the last thirty years on the other side of the mountain. And they're tooling up to attack the village that treated them so unfairly.

It's a lovely idea, and you'd imagine that Imamura himself would be amused by his son's inversion of the themes of Narayama. There's a lot of entertainment value in the concept of an action movie whose protagonists are all women in their seventies and over. (In case you were wondering, any men abandoned on the mountain are just left to rot, as they're considered to be part of the problem.) Kayu makes for an intriguing moral centre, because she actually wants to die, and she's angry that the decision to do so has been taken out of her hands. There are some interesting debates on free will scattered throughout the film, intermingled with some unexpected comedy (including what might just be the most spectacular fart gag ever committed to celluloid).

If the story had confined itself to the old women and their revenge, Dendera could have been great. But just as their plans to storm the village reach fruition, their community is savagely attacked by a bear. They regroup and reassemble their forces, only to be attacked again by the same bear. And you slowly come to realise that the movie has stopped being The Little Old Japanese Lady Expendables, and has turned into The Bear Who Ate Little Old Japanese Ladies. The second one could be a fine movie in its own right, but I was quite enjoying watching the first one. And as it drags on to its climax, you realise with some surprise that it's possible for a film to have too much old-lady-on-bear action in it. Still, you can't deny it's an original scenario for an action movie, and at the very least it proves that even a shonky animatronic bear like the one used here beats a CG one hands down any day. 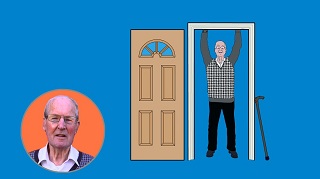 In a discussion with Max Fischer and Malcotraz before London Calling, I described it as a filler in our schedule: our second one of the day, after The Monk. That seems monstrously unfair in retrospect, particularly given the ambition and enthusiasm of the young filmmakers involved in these eight shorts, all part of Film London's initiative to give people their first experience of working in films. It seems to me that the fairest thing to do would be to take them in the order in which they were shown, so let's do that.

Joe Tucker's How Much For My Brother? [spoilery trailer] makes for a queasily entertaining opening: its first half is a wryly whimsical story of barely suppressed sibling rivalry, but one line of dialogue in the middle suddenly shunts it into much darker areas. The rest of the film never quite matches the jolt of that mid-point reversal, which messily unbalances the flow of the plot, but Tucker's light touch somehow keeps it alfloat throughout. Tom Ludlam's Rule Number Three [official site] also has a familiar idea at its core - a Scrabble game with a subtext slowly making itself visible on the board - but doesn't really do much new with it, although its punchline is nicely timed. Mawaan Rizwan's Jimmy Will Play [official Facebook] makes it three shorts in a row with a well-worn premise, and the soppiness of the mother-son relationship at its core isn't really leavened by it being set in an Indian family.

Things perk up dramatically with the next film. Andrew Steggall's The Red Bike [official site] has a confident visual style, and a pleasing ambiguity to its storytelling which keeps you guessing as to where it's going until quite late on (although I had my suspicions from literally the opening shot). The real crowd-pleaser of the night is Kate Sullivan's Walk Tall [official site], a part-animated documentary about 91-year-old George Weedon, a gymnast in the 1948 London Olympics and still fighting fit to this day. Carol Morley gave a delightful introduction at the start of tonight's programme, and in the same way that her Dreams Of A Life makes you reassess your relationships with your family and friends immediately afterwards, Walk Tall leaves you thinking about the curvature of your spine, thanks to Weedon's useful tips on how to improve your posture. You can hear the entire audience shuffling in their seats after the end credits, trying to sit up straight.

Sonia Castang's Jasmine [official Facebook] plays as a nice reaction against the traditional nature of the earlier shorts in the programme: the two sisters in the story could be individually viewed as Worthy Short Film Cliches, but it's the relationship between them that turns out to be a pleasant surprise. Douglas Hart's Long Distance Information [official Facebook] is the sole example of a one-joke short here, but by God it's a great joke, brilliantly enhanced by Peter Mullan's typically grumpy performance. And to wrap up, Rosanne Flynn's Meconium [official site] is a thrillingly compressed bit of storytelling, pacing its tension and release perfectly across five taut minutes. Apparently, these Film London shorts programmes have been a feature of the LFF for years now, but I seem to have not noticed them in the past. I'll pay more attention next time.