Reviewed today: The Jewel, A Simple Life, Tahrir 2011: The Good, The Bad And The Politician. 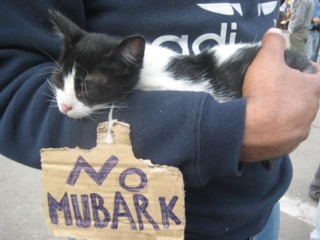 Where were you when it all kicked off in Egypt? On January 25th, I was stuck in a small snowbound corner of Munich, watching the revolution unfold live on German telly, wishing I had access to a better source of information. Once I'd got back to England, I discovered Al-Jazeera's live internet stream, and I was hooked from then on. Because these days, we've come to expect that when something genuinely historic happens in the world, live television coverage is the way to find out what's going on. Having said that, the opportunity for some retrospective analysis would be useful too. But all we tend to get on TV are compilations of the live news footage, crudely cut together a couple of hours after the story has peaked.

Which is why it's interesting that two of the last-minute additions to this year's Festival programme are just-completed documentaries about a couple of the biggest news stories of the year, giving us a more considered view of events than we'd get from the rolling news channels. After yesterday's The Tsunami And The Cherry Blossom, we now have Tahrir 2011: The Good, The Bad And The Politician, in which three young Egyptian directors analyse the downfall of President Hosni Mubarak from three very different angles.

Tamer Ezzat's segment, The Good, approaches the story from the most traditional perspective: that of the protestors on the ground at Tahrir Square. Over 18 days, their occupation had all the ups and downs of a Hollywood script, even up to the dramatic all-appears-lost moment preceding the climax - Mubarak's speech the day before his fall, when he bullishly claimed he had no intention of leaving. Ezzat gets decent interviews with a number of people who were there in Tahrir, and shows how this was a very different kind of uprising: "How can you have a revolution with a set date? How can you have a revolution on Facebook?" There are some fascinating after-the-fact details revealed here, including how even the shutdown of internet services in Egypt couldn't stop video of the protests getting uploaded for the world to see. (Not much appears to have changed since the events depicted in LFF 2009's The Ferrari Dino Girl: people will always find a way to get information out.)

The Good is a solid background to the events in Tahrir Square, and sets us up nicely for the two other sections in the film. Ayten Amin's The Bad bravely tracks down some of the security service personnel who were defending the Square, and talks to them about their actions: this after an opening half-hour that's included several scenes of protesters being beaten, shot, and driven over at high speed. Some of them have no regrets (the phrase "only obeying orders" gets used a couple of times without a shred of self-awareness), others have left the force since January. Either way, it's looking at the uprising from a point of view we've never seen before.

Finally, Amr Salama's The Politician takes on the bad guy of the piece, Hosni Mubarak himself. It's much lighter than the other two sections, structuring itself around a ten-point guide to becoming a dictator, mixing stylised motion graphics with a series of interviewees from satirists to psychologists. Salama may be sending up the President now that he's gone, but there are some serious points to be made. Mubarak's modus operandi is laid bare: by confusing the President, the Government and the country in people's minds, he made it so that any criticism of one was interpreted as a criticism of all three. If you're saying the President is bad, then by implication you must hate Egypt. Salama, happily, has no such scruples, and even a cheesy dig at Mubarak's use of hair dye has something to say about the way he manipulated his public image.

These are really three separate short films bundled together (and they even share a couple of shots between them), but the contrast between the three makes them worth watching as a single package. The contrasting styles and viewpoints spark off all sorts of connections that you wouldn't have made otherwise. And, above all, it makes you realise that many of us haven't really thought about Egypt since Mubarak's fall in mid-February, and maybe it's time we checked up on what's happened since then. 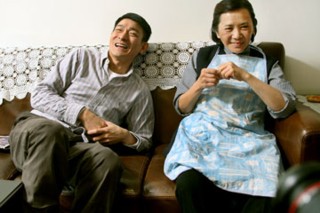 About two decades ago, I would have suggested to you that Hong Kong cinema was some of the finest in the world. Admittedly, within seconds of saying that I would have backtracked and said okay, maybe not the finest: but there was a sweet spot in the late eighties and early nineties when its genre movies were taking the sort of risks that nobody else was. Those days are long gone, sadly: HK's film industry has been in a slow decline ever since 1997. And if their genre films have been plummeting in both quality and popularity, imagine how the more serious end of their production slate is faring.

Nevertheless, we still get the odd HK film at the LFF, and the latest production from veteran director Ann Hui is a welcome arrival. It's the story of Ah Tao (Deanie Ip), who's been working as a maid for the Leungs for four generations. Nowadays, the only member of the family left in Hong Kong is Roger (Andy Lau), whose jet-setting film producer lifestyle means he's rarely about: but whenever he's got a few days back home, he totally relies on Ah Tao to look after him. When she's incapacitated by a stroke, Roger suddenly finds that even as a middle-aged man, he's got a surprising amount of growing-up to do.

A British audience of a certain mental age will get the giggles right from the opening titles, which reveal that A Simple Life is produced by Bona Film Group. ("Hello, I'm Zhu Lian, and this is my friend San Di.") But once we've got past that, the film is a rather sweet character study, deftly getting across huge amounts of story in a few simple images. Take the lovely sequence shortly after Ah Tao has gone into hospital, where Roger is seen alone in his apartment, silently reading the instruction manual for a washing machine with increased bemusement. We could have had a big dialogue scene where Roger sits by Ah Tao's bedside and confesses that he's relied on her too much for too long: but that one shot says it all with maximum economy.

But as with most Hong Kong productions, A Simple Life tries to be several things at once, and that detracts a little from what it actually does best. Because Roger is a film producer, we get cameos from a couple of dozen legends of HK film playing themselves, and many injokes at the expense of the industry. As a HK cinema fanboy, I can't deny that there's a lot of entertainment value in watching Sammo Hung order most of the contents of a restaurant menu while Tsui Hark looks on in disbelief. But it means that you've got two films playing simultaneously on the same screen: a comedy about the film business, and an emotional drama about a man having to care for the woman who effectively raised him.

If you ignore the wobbles that the film producer sideplots introduce, then this is a rather fine piece of work. And crucially, it depicts the changing relationship between Roger and Ah Tao without getting too mushy about it: always undercutting any soppier moments with gentle comedy. It doesn't avoid sentimentality totally - after all, it's a film about an old woman who's already at death's door before the end of the first reel, there's no way that it could. But compared with the emotionally incontinent approach of a traditional Hong Kong movie on the subject, this is like Michael Haneke or something. 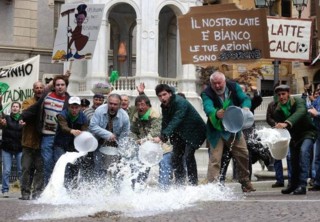 For those of you counting, this is my 42nd and final entry in this year's LFF diary. And it's a shock to realise that The Jewel is the first one of the films I've seen this year to come from Italy. I've noted in the past how the Italian movies tend to be loaded into the back end of the schedule: this one, however, is here as one of the bonus screenings for films that have proven popular earlier in the fortnight. Sadly, we don't get Adrian Wootton introducing it: presumably he's in Leicester Square cheering on Sandra Hebron for her last ever Closing Gala.

Meanwhile, we're here in NFT2 watching Andrea Molaioli's fictionalised version of a corporate scandal that rocked Italy several years ago. In real life, the Parmalat company went bankrupt in 2003, with debts of the order of thirteen billion Euro, and another ten billion that had just gone missing. In the film, they become Leda, a food and drink company that's regarded as the jewel of Italian business. At its head are two frequently conflicting personalities: the CFO Ernesto Botta (Toni Servillo), and CEO Amanzo Rastelli (Remo Girone). Leda is massively successful, but the two men feel they can do more. It starts with them putting a few shares up for sale: it ends with a secretary smashing up a computer with a lump hammer as the police come to take her away. Molaioli shows step by step how the company fell so spectacularly.

The last time we saw an Italian film that took on corruption in such a head-on way, it was Paulo Sorrentino's Il Divo, one of my favourite films of LFF 2008. The Jewel shares a star, a cinematographer and a composer with Il Divo, if not more: and for its first half, the film feels a little too much like Sorrentino-lite. It tries to enliven the setup of Botta and Rastelli's Ponzi scheme with a constantly moving camera, multinational locations and unexpected music choices, but it's patently obvious that this is Molaioli throwing everything at the viewer to keep them interested. But once we're past the midpoint hump, it gets much much better. Whatever the Italian for schadenfreude is, this story taps into a rich vein of it, and the decline of Leda becomes absolutely thrilling to watch.

At least we had an exciting climax to finish off LFF 2011. But The Jewel turns out to be another one of those films to file under 'starts weak, ends strong', in the cabinet next door to 'starts strong, ends weak'. So which were the movies that were great (or lousy) all the way through? Come back for The Wrap Party in a week or so, and we can talk about it then.