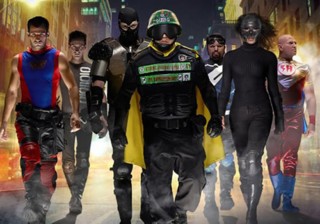 Earlier this year, there was Super: the year before that, there was the film that Stewart Lee insists on calling Kick Arse. It would appear that the idea of non-superpowered people taking inspiration from comic book heroes is now a full-on Cultural Thingummy. And part of that may be down to the way that it's also been happening in real life for quite some time now. Michael Barnett's HBO documentary combs the length and breadth of the United States looking for examples.

Inevitably, he finds a wide variety of people who don costumes for different reasons. Mr Extreme's been driven by the apathy of American society in general - and the notorious Kitty Genovese case in particular - to become a protector for the people of San Diego, armed only with the knowledge that he could gouge a bad guy's eyes out if push came to shove. A group called the New York Initiative prowls the streets of Brooklyn at night looking for crime, and when they don't find any they resort to dressing up sluttishly to try and lure perverts out of the woodwork. Meanwhile, in Orlando, Master Legend - a man whose superhero backstory includes him fighting his schoolmates as entertainment for his dad's KKK meetings - is receiving messages from God that tell him what he's doing is right. Even though all he seems to be doing is chatting up women and drinking beer ("being a superhero is thirsty work").

Barnett interviews all of these and many more, and also includes commentary from a number of related sources: a psychologist, a policewoman, and Stan Lee himself. It's interesting to note that the main concern they all have is that these people will eventually hurt themselves, as they attempt to right society's wrongs without any formal training. But I suspect they don't have much to worry about: if there's one thing many of Barnett's subjects have in common, it's that they rarely seem to encounter crime of any sort at all. One of the funniest running gags in the film is how the New York Initiative always come up empty when they go out on their entrapment missions, but end up helping people almost by accident - patching up a homeless guy who's been in a hit-and-run, or taking the car keys from a drunk driver. The only person who's ever seen in the same frame as a criminal act is Dark Guardian, who spends his evenings driving drug dealers out of Washington Square through the simple superpower of nagging.

Amazingly, Barnett gets through the entire film without patronising any of the people he follows. (Although you do wonder if Master Legend is actually an alcoholic, or if Barnett just had a lot of shots of him drinking.) Without judging, he looks at the psychology that drives people to don a costume. Many of them have suffered some sort of trauma, and appear to see Bruce Wayne's actions following the death of his parents as some sort of career path. All of them seem to have a fair degree of paranoia about the state of society, and how they're the only thing stopping it from falling apart. One or two - just one or two, mind - are in it because they like hurting people.

But the film's carefully structured to gradually reveal that despite their ridiculous appearance, many of these superheroes are actually doing some genuine good: just not in the way you'd expect from the comics. The final couple of reels stop the film being a simple freakshow, and turn it into a well-rounded portrait of a subculture that most of us would dismiss without a second thought. As a made-for-TV documentary, I'd imagine Superheroes would turn up on UK telly eventually, and it'll worth catching when it does. 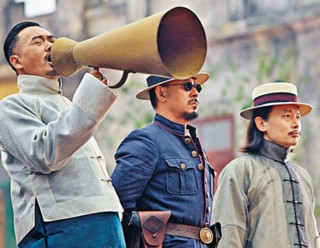 The cinemas used by the LFF take on a large number of volunteer staff during the festival, for ushering work and the like. It seemed to me that there were a lot more Chinese volunteers at this screening than there have been at any other film so far this year. But that seems reasonable enough: Let The Bullets Fly is the biggest-grossing domestic film ever released in its home country, so you'd imagine there's a ready-made audience literally next door to Leicester Square in Chinatown. I didn't know too much about the plot going in, but the old Hong Kong movie poster at the door boasted a January 2011 release date, and I immediately thought "oh, okay, it's going to be one of those sorts of films." There's a certain type of movie that gets released in China and Hong Kong around Chinese New Year - think about the sort of big dumb flicks that come out around Western holidays, and you'll get the general idea.

Let The Bullets Fly stars its director Jiang Wen as the notorious bandit Pocky Zhang, who robs his way though 1920s China with his individually numbered gang of half a dozen or so. A spectacular pre-credits train heist gives him the idea for an alternative way of making money - he'll impersonate the new mayor of Goose Town, as the real one appears to have been killed on his way to taking the post. (Yes, appears, ignore that for now.) But being a mayor isn't as profitable as you may think, particularly when Goose Town is really being run by its resident crime lord Huang (Chow Yun-Fat). We first meet Huang as he observes Zhang's entry into town, and immediately starts plotting against him. But seconds after that we discover that Huang has a lookalike that he uses for criminal purposes, and we immediately think "oh, okay, it's going to be one of those sorts of films too..."

And that's exactly what Bullets is: a large-budget romp with lots of laughs and action. If the sheer number of double-crosses and triple-crosses becomes too complicated to follow, it isn't really that much of a problem, because the film works most of the time on the level of pure spectacle. There are suggestions that Zhang and Huang's desire to make money above anything else might have some sort of parallel with contemporary China, but (for a Western viewer at least) that subtext tends to get lost in all the yelling and gunfire. (It's a film that certainly delivers on the promise of its title: although given Chow Yun-Fat's previous history in John Woo gunfests, you may be surprised at just how few of those bullets he lets fly himself, what with Huang being a very hands-off crime lord.) It's a film that may seem a little overwrought to audiences who aren't familiar with this sort of thing: hell, it even seems a little overwrought to me, but on the whole it's entertaining enough. 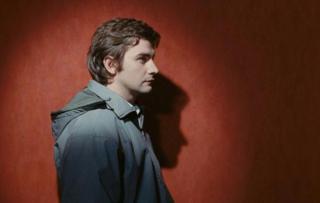 If there's one thing that cineliterate festivalgoers like to be told about themselves, it's that their hobby is probably going to make them psychopathic. And Laurent Achard's cheapo horror flick is very much reaching for the tradition of something like Peeping Tom, even though he denies it in the post-screening Q&A afterwards. Its protagonist is Sylvain (Pascal Servo), the projectionist at a smalltown cinema called the Empire. (Now showing: French Cancan, 6pm and 10pm nightly.) Working at the cinema takes up most of his days: and then at night, he goes out and hacks women to death.

To be honest, there's not much more to the plot apart from that. Sylvain also gets to strike up a tentative relationship with young actress Manon (Charlotte Van Kemmel): at this screening, her revelation that she's about to star in a stage production of Phaedre resulted in an audience member uttering one of the most overstated Knowing Laughs I've ever heard anyone make in a cinema. (It turned out to not be as Knowing as it thought it was, so there you go.) And we get a couple of flashbacks which gradually reveal how Sylvain got himself into this psychological mess: you could probably make a decent guess for yourself from what little you know so far.

I suspect most of the audience here was hoping for something a little more than that from Last Screening, based on the LFF programme notes. When an audience member complains about the use of cliches after the screening, Achard says that he acknowledges that they are cliches, and wanted to work with them rather than subvert them. But he doesn't do anything with them at all: all he ends up with is a straightforward slasher movie that has one or two ideas above its station. Even the cinephile angle that the film was sold on doesn't amount to much - Sylvain turns out to be just an obsessive, rather than specifically obsessive about movies. If Achard wants to persuade us three-films-a-day types that we're all mental, he'll have to do better than this.