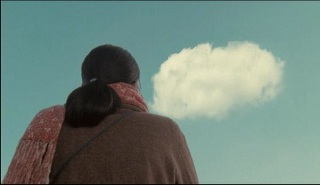 Ah, the mysteries of Japanese film titles. Take the work of Yûya Ishii, for example. Last year he was here with Sawako Decides: this year his entry is called Mitsuko Delivers. Someone's obviously decided that they're going to apply Robert Ludlum-style standardisation to his title formats. I say 'someone' rather than 'Ishii', because the English titles of his films bear no relation whatsoever to the Japanese originals. Sawako is better known in its home country as Greetings From The Bottom Of The River, a reference to the clam packing company song that drills its way into your head after just one hearing. Meanwhile, Ishii's new pregnancy comedy has an original title which The Belated Birthday Girl tells me more or less translates as What's The Deal With My Stomach?

The person asking that question in the film is, of course, Mitsuko (Riisa Naka). At the time we encounter her, she's nine months pregnant and living in a basic apartment in Tokyo. But we quickly realise that there's more to this situation than meets the eye: when she calls her parents on the phone, she's telling them she's still in San Francisco where the baby was conceived. Mitsuko is fond of just wandering off when things get bad, and seeing where the wind takes her. This time, it takes her back to the slum where she spent her formative years, which is still occupied by her bossy landlady Kiyo (Miyoko Inagawa) and her childhood sweetheart Yoichi (Aoi Nakamura).

Inevitably, the temptation is to compare Mitsuko Delivers against Sawako Decides. The new film is undeniably better in entertainment terms, with a much less wobbly tone than its predecessor. But it's also interesting to compare their themes. Sawako had a fatalism to it that was refreshing in Japanese cinema, taking the unusual viewpoint that we should accept our failings and not get hung up on them. Mitsuko, on the other hand, has a message of collaboration behind it: we should accept our failings, but allow other people to help us overcome them. When Mitsuko barges into her landlady's place demanding free accommodation, she warns her "I'll be imposing on you, but that's okay, because you can impose on me too." (Which is probably exactly the sort of message Japan needs to hear right now. We'll come back to this later today.)

At the heart of this is a staggering performance by Riisa Naka, whose Mitsuko is an extraordinary character. She's totally believable as a person who could never settle in one place for any period of time: with just the smallest amount of tragic spin, you could see this film turning into Dreams Of A Life. But when the chips are down, she's utterly focussed ("first things first, time for a nap"), and drags everyone else along in her wake, thanks to an almost psychopathic degree of optimism. Cunning use of childhood flashbacks allow us to see where she picked up some of her adult habits - her tendency to burst into houses unannounced, her classification of everything as 'cool' or 'not cool', her use of running away as a solution to economic problems. But Naka takes what could have been a simple collection of character tics and turns them into a recognisable human being, one whom we're happy to spend time with. As long as we don't have to do it in real life, anyway. 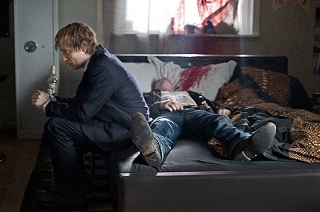 We're in the vinegar strokes of the Festival, the point where the programme gets a little more fluid. Several slots are left free during the final couple of days, leaving room for late arrivals to the programme, or repeat screenings of unexpected hits. Headhunters is one of the latter, based on a novel by the smelliest crime novelist in Wales (see his website JonesBO.com for more details).

Roger Brown (Aksel Hennie) has it all at the start of the film, which leads us to expect he'll have a lot less of it within an hour or so. He's got a beautiful wife, a generally compliant mistress, a high-powered job in a headhunting firm, and a cunning scam he runs on the side to relieve some of his corporate clients of their most expensive works of art. When Clas Greve (Nikolaj Coster-Waldau) turns up with the promise of a spare Rubens in his attic, Roger assumes this is the job that'll set him up for life. At this point, I refer you back to the opening sentence of this paragraph.

Headhunters is probably the most nakedly commercial film I've seen at this year's Festival. It inherits some class simply from being foreign, and because Scandinavian crime drama is obviously trendy right now, but it's not all that different from a typical Hollywood thriller. (See also the wholly unrelated Headhunter, a Danish film which played here in 2009.) Director Morten Tyldum handles the action and the plot twists effectively, and it wouldn't be surprising if he ended up being poached by an American studio in a couple of years.

Where Headhunters does differ from an American thriller, I think, is in its hilariously callous treatment of its protagonist. By the end of the opening credits, it's been established that Roger is a moderately unpleasant piece of work. With that in mind, Nesbø and the filmmakers have decided that he needs punishing, and a large part of the film is dedicated to the torments inflicted on Roger as his life falls apart. They're treated with a healthy dose of absurdity: there's a chase sequence in the middle which climaxes in a magnificently surreal sight that leaves you itching to describe it to people the next day. But I won't: why spoil it for you? Even though the stakes are kept at life-or-death levels throughout, it's this knowing black comic edge that lifts Headhunters above the norm. 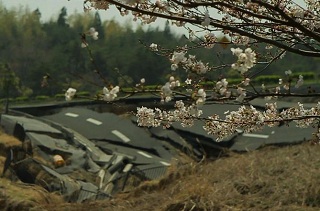 8.30pm: The Tsunami And The Cherry Blossom [official site]

Headhunters was a late addition to the programme because its earlier screenings sold so well: Tsunami, on the other hand, is a late addition because it was completed just a few days ago. It's only a forty-minute film, but it's one that really needs to be seen right now, so the LFF has made special arrangements to fit it into their schedule. Their solution to the film's awkward length is to combine it with an extended on-stage Q&A, in which director Lucy Walker is interviewed by her old university chum and fellow documentary maker Jess Search. It's a good choice, as Search and Walker throw in just enough girly banter to keep things light as they look back at Walker's career.

After the two of them finished at uni, Walker went off to film school in New York. Search was astonished by this development at the time: "I never knew you could go to film school, never mind New York..." Walker started off studying fiction, but under the tutelage of the legendary Barbara Kopple she realised she was better suited to the documentary form. There's been a huge surge in documentary making over the last decade or so, and Walker puts that down to the advent of non-linear editing systems. Factual films are effectively written in the cutting room, and the ability to put all your footage on a computer and reassemble it in countless different ways has revolutionised the way in which they're made.

We look at clips from the four features she's made over the last decade. Devil's Playground is a candid look at Amish teenagers going through the crucial period where they decide if they want to stay in the religion or not: ironically, it took the advent of high-tech digital cameras to allow Walker the flexibility to film these low-tech people. Blindsight (shown at LFF 2006) taught her how to deal with multiple narrative perspectives in a film, giving everyone the chance to have their side of the story told. Countdown To Zero was a commission from Participant Films, and showed her that making a film about an issue (in this case, nuclear arms proliferation) is much harder than making a film about people. And her biggest hit to date, Waste Land (shown at LFF 2010) is definitely about people: the artist Vik Muniz, and the workers on the world's largest rubbish tip. ("You know how to pick 'em," says Search as she plays a clip.)

But the main reason we're here is to watch Walker's latest piece. For several years now, she's had an ambition to make a short film about the Japanese cherry blossom season. She even had rough plans to do it this year, while on her promotional tour for Countdown To Zero. The events of March 11th 2011 put paid to that: nobody in Japan wanted to watch a film about nuclear terror when the tsunami had just caused such havoc at the Fukushima power plant. But, thought Walker, maybe this was the best time to travel to Japan and make a film: at the very least, to show solidarity with the Japanese people in their time of need.

Getting back to the subject of Japanese film titles we started with today: according to The BBG, this one more accurately reads as The Tsunami And Then The Cherry Blossom. This turns out to be a description of both the theme and the structure of the film. The first half looks at the tsunami, and its impact on the people of Japan. It opens with a harrowing piece of camcorder footage of the disaster, whose scale is still completely impossible to get your head around even as it's playing in front of you. (There have been several attempts to portray the event in purely abstract terms, such as a multi-screen capture of the six main Tokyo TV stations at the time the earthquake hit: the event itself is so vast, you can't believe what you're seeing.) Walker talks to a number of survivors, and hears their astonishing stories, like the man whose house floated 100 yards down the road and only stopped because it hit the swings in a children's playground.

But just one month after the tsunami came the cherry blossoms, a traditional festival time for the Japanese. The 2011 celebrations were inevitably muted: no boozy parties under the cherry trees, as is usually the way. But Walker's interviewees take comfort from nature's good side showing itself, as a contrast to the bad side they saw in March. They explain why the cherry blossoms are so important, seeing them as a symbol of the Japanese people themselves: the blossoms aren't much to look at individually, but a tree full of them is a beautiful sight. And a large part of that beauty comes from an awareness of how short their lifespan is.

When Walker was initially planning a simple film about cherry blossoms, she thought it would be a nice light palate-cleanser after a couple of documentaries on heavier subjects. Obviously, events stopped it from being quite as light as she would have hoped. But The Tsunami And The Cherry Blossom has a poetic feel to it which I haven't seen in her other films, using the tragic events as a way into a delicate meditation about life and nature, one that feels very Japanese to me. I hope the Japanese people feel the same way about it, too.