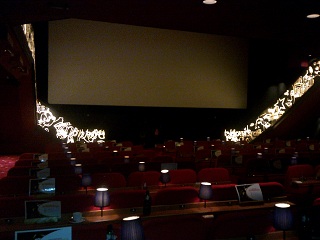 First things first - the two cinemas I visited while I was in Eindhoven were the Pathe and the Service Bioscoop Zien. The Pathe got most of my attention because it was just down the road from my hotel: a slightly soulless multiplex, but ruthlessly efficient, and featuring self-service ticket machines to get around that whole talking-to-people problem I highlight in the opening of the article. By comparison, Service Bioscoop Zien is a lot funkier and friendlier, as you can see from the picture above. Note the little doorbells in front of each seat, which allow you to summon staff to bring you snacks without you ever having to stop watching the film. (Coincidentally, it's a service that appears to have just been introduced at a London cinema.)

As for the films, here are some trailers for you. First up is New Kids Nitro, the spin-off from a Comedy Central TV show. The trailer here gives you a good idea of what to expect: note that there's a shot in here that might be considered actually pornographic in some countries, so be careful where you watch it. Inevitably, its core audience is teenage boys, so it's interesting to note that the Dutch classification board feels the need to specifically tell the kids that this one isn't for them. If you fancy seeing it on DVD, it's released on April 24th.

Next up, Dolfje Weerwolfje. I'd like to believe I'm the only person who's ever watched this film and New Kids Nitro back to back on the same day (and in the same cinema, no less). You can see the fun people were having at the premiere, courtesy of Pathe. DVD available March 6th.

Nova Zembla - the trailer's not in 3D, sadly, but you can imagine which shots are the ones that exploit the process the most. (By the way, did you spot the subtle visual link between the article currently under discussion and my previous one on Mostly Film?) Bizarrely, the music from this very traditional seafaring costume drama is also available in an Armin van Buuren remix. DVD available March 21st.

Doodslag: sadly, the only bit of Eindhoven I can recognise out of all the shots here is, indeed, the PSV stadium. It turns out that attacks on emergency workers (such as the one shown in the trailer that triggers the plot) are a big problem in Holland right now, hence this campaign. DVD available May 22nd.

And an extra video to wrap things up: the end titles song from New Kids Nitro, as Ronnie (fictional) and Corry Konings (real) perform Hoeren Neuken Nooit Meer Werken. Just to emphasise what a big deal this is, Konings is a much loved Dutch pop star from the seventies and beyond, who's been coaxed out of retirement to sing the chorus on a song which translates as Fucking Whores Never Work. Apologies if you have this stuck in your head for the rest of the day after hearing it.