MOSTLY FILM: Whose Film Is It Anyway? 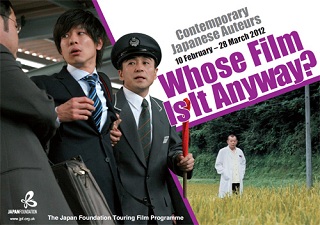 The Japan Foundation's touring film programme has become an annual fixture, not just in the UK's arthouse cinemas, but also on this site. For the last few years - specifically, in 2008, 2010 and 2011 - I've been catching the tour on its opening London leg at the ICA, and I've been writing about the films here after the fact, for the benefit of the cities further on down the schedule.

But this year's going to be a bit different. I'll be writing about the 2011 programme - entitled Whose Film Is It Anyway? Contemporary Japanese Auteurs - for Mostly Film, now firmly established as Europe's Best Website. And because, unlike me, they have Proper Journalistic Credibility And All That Shit, I've been able to mooch some advance screeners from the Japan Foundation via them. Which means I can proudly bring you reviews of all of the films in the season several days before they hit the cinemas (the tour starts in London on Friday February 10th).

You can read those reviews on Mostly Film right now. If you'd rather just sit around and look at the trailers, though, then you're in the right place.

First of all, a quick conspiratorial wink to the regular readers. Four of the films in this season have previously been shown at the London Film Festival, and already been reviewed here. I've tried to make the reviews in the Mostly Film piece different, but if you spot any obvious cutting and pasting, just keep quiet about it, okay? Anyway, the first trailer is for I Just Didn't Do It, which I first saw back in 2007. I rewatched it for this piece, and I'm pleased to report it still holds up. London viewers will have the opportunity to see writer/director Masayuki Suo in person, as he's doing Q&A sessions after the ICA screenings.

About Her Brother is Yoji Yamada's attempt at reworking the formula from his two longest-running franchises, but it doesn't really hold up against either Tora-san or Tsuribaka Nisshi. Interesting to note that the film has a dedication at the end to another film: the similarly themed Her Brother by the just-deceased Kon Ichikawa.

Next we have Sleep, the most recent of the films in the season - it was released in Japan in November 2011. If you're watching all of these trailers at work, a) where do you work so we can all join you?, b) this one is probably the one you least want to be caught watching by your boss. Katsumi Sakaguchi will be introducing this film at the London and Sheffield screenings.

Heart, Beating In The Dark is a confusing one, as I mentioned when I reviewed the 1982 original and the 2005 remake together at LFF 2006. The trailer below is for the new film: what would be nice is if I could link to some footage of the old one too, but there doesn't seem to be any on the internet. Sorry.

The Dark Harbour didn't work for me, but your mileage may vary.

Bad Company is the oldest film in this collection, dating back to 2001. Amusingly, the only way you can buy it on amazon.jp is on VHS.

Dear Doctor was at LFF 2010. I got a little dozy during the first part of it, but it definitely gets better as it goes. As noticed in the article, this is the second appearance from About Her Brother's Tsurube Shofukutei, but he's not the most heavily employed actor in this programme...

...because that honour goes to Ryo Kase, who's a courtroom defendant in All Around Us (which I previously reviewed at LFF 2008), the nice carpenter in About Her Brother, and the theoretical arsegrabber in I Just Didn't Do It (yes, that's him at the top of this page). Did the Japan Foundation plan this? (By the way, I only discovered the official site for All Around Us nine hours after the article went up on Mostly Film, so have an exclusive link to it.)

Finally comes A Stranger Of Mine, which is a great little puzzler full of narrative surprises. Many of which are brutally ruined by the trailer below. Seriously, if you're planning on seeing the film at any time in the future, don't look at this video. Maybe you can make do with the trailer for Kenji Uchida's followup, After School, which appears less desperate to reveal all its secrets up front. (Just look at all those question marks in the on-screen captions, for one thing.)

And finally, even though the chances of my making any money out of this are zero, here are links to buy all of these films from Amazon Japan. There's no DVD for Sleep as yet (it's barely finished its theatrical run), so from left to right, these are I Just Didn't Do It, About Her Brother, Heart Beating In The Dark, The Dark Harbour, Bad Company (VHS only), Dear Doctor, All Around Us and A Stranger Of Mine. Do any of them have English subtitles, you ask? Well, Heart Beating In The Dark, Dear Doctor and All Around Us do. And if you're willing to settle for a Hong Kong import, then YesAsia can do you a subtitled copy of About Her Brother. But you'd probably find it quicker and easier (not to mention cheaper) to catch the films on tour in the UK over the next two months - see the official site for venues and times.