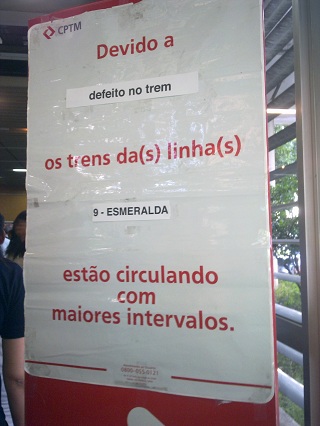 It's official: Monoglot Movie Club is now a series. Yesterday on Mostly Film, they published the second instalment, following on from the piece I wrote for them in January about what was going on in the cinemas in Eindhoven. The latest one, entitled Monoglot Movie Club: City Of Drizzle, takes a similar look at Brazilian cinema, based entirely on what local product was available in the multiplexes of São Paulo during the week I spent there in mid-February. As you'll see, there wasn't much, but I still managed somehow to get nearly nineteen hundred words out of it.

What else did I do in São Paulo during that week, you might be asking? Well, I did some work, obviously, and that needn't concern us here. But if you fancy hearing about everything that wasn't work or movies, then this is the place to be, because that's what your Red Button Supplement for this Mostly Film article is going to be about.

If I'm honest, I didn't know all that much about São Paulo before I went there, other than it being the setting of the best graphic novel of the 21st century so far, and the subject of a fabulously bombastic song by the Guillemots. The few Brazilians I talked to about the city seemed to agree on one thing: I would almost certainly be robbed while I was out there. Okay, I'm exaggerating a little. But all the stories I kept being told about not going out after dark, and not taking my laptop on public transport, were racking up my paranoia long before I made it over there. The Belated Birthday Girl started fearing for my safety for all sorts of reasons, especially when she discovered that the route to the airport went along Ayrton Senna Highway - "they named a motorway after someone who died in a car crash?" (I tried to reassure her that I'd be leaving it early at the exit for Princess Diana Tunnel, but that didn't seem to help.)

Well, as you can see, I made it back safely. There's no denying that there are no-go areas in the city - a cab ride from one end of it to the other shows you the extremes of wealth and poverty that can be spanned in just a few blocks. As with any other major world city, you need to stay aware of your surroundings and not do anything that makes you stand out as an obvious tourist. It helped that with the clothes I'd brought for the week - plain shirts with sleeves rolled up, dark trousers, a few things in a rucksack - I'd managed to accidentally adopt the disguise of any man in São Paulo that works in an office.

It also helped that I was both living and working near to the New Business District, away from the favelas in the centre of town. My hotel for the week was the Mercure São Paulo Nacoes Unidas, which was a typical example of what you'd expect from the chain: the front of house staff incredibly helpful and all fluent in English, the food service staff a little less so. (Lowlight of the week: the guy who took my call for room service giving up halfway through, telling me to get reception to call him - "Dial one! Dial one!" - and then hanging up on me.) I had all my evening meals in the hotel, split between room service, the restaurant buffet and the a la carte: the latter is definitely the best of the three, especially a beautifully cooked apple and gorgonzola risotto.

Work, meanwhile, was one stop away on the CPTM light railway. Fantastically crowded during rush hours, it's the only place apart from Tokyo where I've seen staff employed to physically push commuters into already full carriages. But unlike the situation I'd seen only a few days earlier in the Japanese film I Just Didn't Do It, it appears to be compulsory to have your hand on at least one stranger's backside during the journey, mainly because there's nowhere else you can put it. That aside, the CPTM is cheap (a flat fare of three reals for a Unitário ticket), it's easy to use, and it's reliable except on the days when it isn't (see picture at top of page).

My workplace was close to the large mall Morumbi Shopping, and my various lunchtimes during the week were spent in and around that area. Inside Morumbi Shopping itself, there's an entire basement full of restaurants: Wraps does a variety of things inside tortillas, and you're bound to find at least one you like on the English menu if you ask for it. Over the road from the mall, there's a street called Rua Bacaetava which has several interesting options within a few yards of each other. Armazem do Alemão, as the name suggests, has a German-tinged a la carte, so I didn't feel too guilty about going for the veal parmegania. Passione is a more traditional Brazilian buffet, where they weigh the plate after you've chosen your food and charge you three reals for each 100g you've taken. It's a good place to get the pork and bean stew called feijoada, which is traditionally eaten on Wednesdays. If you feel a little porky yourself after that, Natural da Cidade next door is the closest you'll get to health food, with fresh fruit juices and egg white omelettes galore.

But what São Paulistas really want is meat, and they know the best way to get it: at a churrascaria, or Brazilian barbecue. I had fun explaining to my hosts that churrascarias have suddenly started appearing all over London over the last couple of years, both in the centre of town and in the Brazilian suburban hangouts. Despite their growing popularity, I haven't been to one, mainly because there seem to be very few options on their menu for a vegetarian girlfriend.

The Belated Birthday Girl would love South's Place, the churrascaria I visited on the final day of the week: aside from the meat, there's a salad and fish bar as big as a normal restaurant, plus side counters making pasta and sushi to order. But let's be honest, it's the dead animals that are the stars here. The system is simple: you have a flag on your table that basically reads 'stop' or 'go'. When it says 'go', that's the signal for a procession of waiters to rush up to you brandishing a gigantic lump of meat on a stick, and offering to cut a slab off for you. And they will keep doing that at roughly 15 second intervals until you set the flag to 'stop'. It's a lot more high-pressured than I expected it to be: I suspect that in the English equivalent, you'd have to flag down a waiter every so often, rather than have to shoo them away from your table to give you a few seconds to actually eat something. Tremendous fun, anyway, although I suspect all that meat just made my blood even tastier for the mosquitoes that were feasting on me all week. (Bring insect repellent. Lots of it.)

Aside from a CPTM ride a few stops further north to Shopping Eldorado (the mall where I saw the movie I wrote about on Mostly Film, the surprisingly underperforming Reis e Ratos), that was basically my week in São Paulo. Everyone there was nice, and nobody stole anything from me. Meanwhile, back home, English bastards were swiping two grand's worth of junk using my credit card number before I noticed them and had to make a reverse charge call to block it. Oh, the irony.