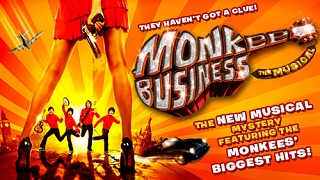 Books: Just My Type by Simon Garfield is the latest in his long line of non-fiction books. (I believe that up until now, the only one I've read is The Nation's Favourite, his retelling of the mid-90s turmoil at Radio 1.) Type looks at the history of the printed word and the font, and how our relationship with them has changed over the years from Caxton to Comic Sans. Garfield reveals the tricks of the trade, showing the tiny details that can change the emotional impact of simple letters. Packed with entertaining anecdotes, and frequently revealing things that have been under your nose for decades, it's a book that literally makes you look at the world differently after reading it. In my case, right now I'm looking at the collected spines of my DVD collection and twitching violently.

Internet: Hype alert! There's a new piece by me on Mostly Film today. Yes, again. Monoglot Movie Club: City Of Drizzle is another one of those articles looking at the fun to be had going to the pictures in a foreign country, in this case Brazil. I'd do the usual trick of putting up some additional background material for the piece here, but I'm doing this thing instead, so come back tomorrow and I'll have some São Paulo restaurant recommendations for you. (If it's already tomorrow or later, there should be a link at the top of this page to take you there.)

Movies: I didn't mention it at the time, but at last year's London Film Festival I walked past Michael Fassbender on the red carpet while he was on his way into a screening. I Did Not See His Cock, as they say on Popbitch. That had to wait until a few days ago, when I finally caught up with Shame, the movie he was on his way into. Steve McQueen's study of sex addiction works as a general study of obsession, and there's no denying that Fassbender and Carey Mulligan give incredibly brave performances throughout. But it's hard to connect with them as characters: it's the story of a man who's become detached from the world, and McQueen puts another layer of detachment on top of that as he coolly observes his disintegration. You end up zooming in on the little details: the familiar-looking Felix The Cat cartoon playing out-of-focus in the background of Fassbender and Mulligan's big scene, or the route of Fassbender's late-night jog. Still, it's a beautiful-looking movie, with cinematographer Sean Bobbitt making New York look as gorgeous as he made London look in Wonderland.

Telly: By Jupiter's COCK, Spartacus is good isn't it? I admit, I came to it late, as I do far too often with TV shows nowadays. I'd heard lots of people talking about it - bemused sneering from Charlie Brooker, abject horror from John Bishop - but the first time I actually saw it for myself was when I watched the whole of the prequel series Spartacus: Gods Of The Arena in one six-hour binge during a long-haul flight. Its reputation as the goriest, sweariest, shaggiest thing on television is wholly justified: but in Arena (and I believe, the original Spartacus: Blood And Sand which is still sitting in my DVD in-tray), all those elements are there as support to a gradually emerging story that becomes the most important part. Now we're at Spartacus: Vengeance, and the episode that's just aired in both the US and UK (Libertus) is one of the most thrilling hours of telly I've seen in years, pulling together half a season's worth of plotlines and then ripping them all up in an apocalyptic climax. My only concern is that there's still half a season to go...

In the meantime, your Simian Substitute Site for March 2012 is Monkee Business: The Musical, although events have somewhat overtaken it in the last 24 hours. It's another one of those jukebox musicals, where a band's greatest hits are used to tie together a story they were never meant to accompany, and we know how well those can turn out. This one is based around the songs of the Monkees, and I'm saying now that if it can't find room for Randy Scouse Git in its storyline, I'm not interested.

Still, it's far too early to judge Monkee Business, which "tells the story of four innocent boys who fall prey to an inscrupulous producer and are tricked into impersonating one of the most famous groups in the world." It gets its world premiere at Manchester Opera House at the end of March, presumably as a nod to the birthplace of Davy Jones: hopefully his passing yesterday won't put too much of a dampener on proceedings. From Manchester (March 29 - April 14) it moves on to Glasgow (April 17-21) and Sunderland (April 24-28)... and then London's glittering West End? Well, the last time I saw a musical touring the provinces was Quadrophenia, and that never made it to the capital, but we'll see.

Hey, hey, it's the comments! And people say they comment around! Or something.