The Death Of Klinghoffer 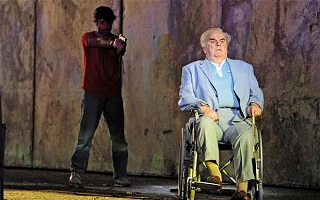 Casual operagoers of London! Here's a useful tip for you. If you ever find yourself purchasing a ticket for the English National Opera, be sure to give them your mobile number and ask them to pester you with marketing offers. Ironically, I did just that in 2010 for a production that I wasn't able to attend on the day - the Punchdrunk collaboration The Duchess Of Malfi, which by all accounts was a bit of a dud anyway.

But since then, whenever ENO has had a few spare seats going for a particular production, they've sent me a text on the day offering them at a massively reduced rate. Which is how I started one day last week with no plans for the evening, and ended it sitting in an Upper Circle seat at the Coliseum that cost me £20 instead of the usual £59, watching THE MOST CONTROVERSIAL OPERA IN THE WORLD.

Well, that's what they usually say about The Death Of Klinghoffer, anyway. More than twenty years have elapsed between its premiere in Brussels and this first ever London production - and it's generally assumed that its handling of the perennial hot potato that is Israel/Palestine is what's had the capital's opera houses running scared of it for so long. In the last ten years, I've encountered the opera in various different forms - a stunning performance of the chorus sections by my pals at the Crouch End Festival Chorus, an intriguing film version (performed on an actual ocean liner) directed by Penny Woolcock, and the first proper British staging at the 2005 Edinburgh Festival.

So why has it taken so long to make it to England - especially since Glyndebourne Opera were partly responsible for its original commission over two decades ago? Because it's based on a true story, one that looks at first glance to be a huge collection of raw nerves waiting to be prodded at. In 1985, a group of Palestinians hijacked a cruise ship, the Achille Lauro, taking over 400 passengers and crew hostage. They were held captive and used as a bargaining tool while the release of a group of Palestinian prisoners in Israel was being negotiated. Initially, it seemed that the incident was resolved without bloodshed: but it was later discovered that one of the passengers, a wheelchair-bound American Jew called Leon Klinghoffer, had been murdered by the terrorists and thrown overboard.

Real people and recent history are always going to be risky things to represent on stage, even more so on rare occasions like this when they're being performed as opera. But composer John Adams and librettist Alice Goodman went one step further: rather than going down the Team America route of making their terrorists faceless durka-durka-spouting avatars of evil, they made them people instead, giving them the opportunity to explain their actions at various points. Is this condoning or justifying the murder of an innocent man, as is frequently suggested by the opera's critics? Anyone who's facing the stage and listening during the last ten minutes of the performance knows this simply isn't the case. Is it an attempt at letting people see both sides of the Israel/Palestine argument, as a first step towards finding ways of stopping this sort of shit from ever happening again? That's closer to the truth. But to hear some people tell it, every time The Death Of Klinghoffer is performed, audiences come streaming out afterwards merrily singing Ding Dong The Jew Is Dead.

Director Tom Morris - brother of Jihad Comedy Director Chris Morris, as the papers kept reminding us on his appointment - was chosen to stage the London premiere of Klinghoffer, and he's obviously had to take on board twenty years of growing controversy relating to the piece. And throughout his production for ENO, he's taken a number of choices to reduce the risk of that controversy infecting his own version. It seems to have been a successful strategy - the London run finished last night without any major incidents - but it's resulted in a production that's somewhat bloodless, leaving you wanting some of the vulgarity that Anthony Neilson brought to it in his Edinburgh Festival staging. I didn't mention it at the time, but - SPOILER ALERT FOR ANYONE PLANNING TO TRAVEL BACK IN TIME TO 2005 - one of Neilson's most spectacular coups was to have the terrorists sitting in the stalls for most of the first act, suddenly rushing the stage brandishing guns for the hijack scene. Yes, yes, it's reprehensible in any number of ways, but fantastic theatre.

Morris has to battle against the rather awkward structure of Klinghoffer as an opera. We don't actually get to see the Achille Lauro for a good forty minutes or so, as we start with a pair of choruses setting out the history that got us from 1948 to this point: one from a group of exiled Palestinians, one from a group of exiled Jews. There are seven choruses in total throughout the opera (six in this production, one's been cut), which are completely detached from the main dramatic action and serve as context to the bigger picture of the conflict in Palestine. And these choruses are the main pitfall facing anyone hoping to stage Klinghoffer - half of it is effectively an oratorio, half of it is a realistic documentary drama with singing. How do you balance the two?

Previous versions I've seen have gone straight from the choruses onto the Achille Lauro, and the testimony of the captain and passengers as they describe the events leading up to the hijacking. But here, Morris has chosen to have them tell their story in flashback at a 2003 press conference. It's a curious device that distances us from the events on the ship, and along the way removes any possible suspense as to who might live or die during the hijacking. I suspect it's part of a general strategy to foreground the documentary aspects of the piece - we get a battery of captions and projected images so that we're always clear as to who we're seeing, what they were doing, and when it happened.

But some things get lost along the way as a result of this focus on the historical background. Unfortunately for an opera, one of them is the music. I don't think the melodies in Klinghoffer are amongst John Adams' best: there's nothing here as jaw-droppingly beautiful as, say, Oppenheimer's aria Batter, My Heart in Doctor Atomic. Sometimes the more dramatic sections, combined with the terrorists-on-a-boat setting, veer a little too close to Hollywood action movie scoring. But there's some fine writing in the choruses, and I can remember when I first heard the CEFC perform the Night Chorus it damn near blew my head off. That didn't happen in this production - some overly fussy staging and muddy sound means that the choral work never quite has the impact you'd hope for.

There are similar problems with the principal players. Alice Goodman's libretto swings from the dramatic ("our faith will take the stones he broke, and break his teeth") to the banal ("I should have worn a hat"), and it's the contrast between them that makes it fascinating. But it always frustrates me when an English language opera assumes the main way that audiences will experience this libretto is via the surtitles rather than via clear singing, and that's largely the case with this production. Again, it's a piece that should be going for the gut, and having to continually look up to read what's being said is one more distancing device that stops it from having a full emotional impact.

However, towards the end, there are two sequences that transcend everything that's come before. Alan Opie's posthumous aria as Leon Klinghoffer, performed while dancers re-enact the dumping of his body into the sea, is the first time that this production actually touches your heart. Which is then ripped out of your chest completely by Michaela Martens in the finale, playing Marilyn Klinghoffer as she rages at the discovery of her husband's murder. In those closing minutes, finally, Klinghoffer hits an emotional peak that justifies calling it opera.

There are plenty of other incidental touches that make this production of Klinghoffer generally worth watching - for me, the surprising appearance of Australian pop singer Kate Miller-Heidke (see Pick Of The Year 2009) was one of them, providing one of the opera's few moments of comic relief as an English dancing girl whose main complaint about the hijacking is its impact on the quality of the catering. But it never quite comes together as a satisfying whole. Somewhere in between Tom Morris' eggshell handling of the politics, and Anthony Neilson's more devil-may-care approach, there's the potential for a production that strikes the right balance between the intellectual and the emotional ambitions of the opera. Now we've got the difficult first London run out of the way, maybe that'll come at some point in the future.

Meanwhile, Kate Miller-Heidke (see final paragraph above) has a new album out soon, and you can download two tracks from it for free from here:

I agree with details you have explained here, from long time i am searching the same article but didn't find it till now, thanks for sharing the article here.

Have you noticed that newspapers and magazines have stopped telling you whenever there's something interesting coming up on the radio? That's why I only found out this production of Klinghoffer was being broadcast on Radio 3 some 45 minutes after it started. It's on the iPlayer till Saturday May 19th, though.